An Ancient Fossil’s Lessons About Cancer 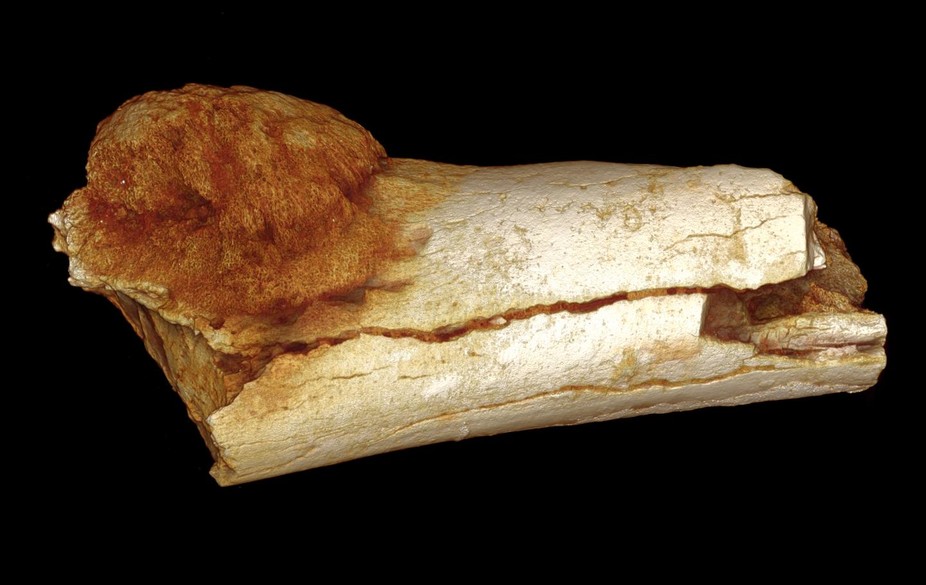 Volume rendered image of the external morphology of the foot bone shows the extent of expansion of the primary bone cancer beyond the surface of the bone. Patrick Randolph-Quinney (UCLAN)

In late July, an international team of researchers announced that they had identified evidence of cancer in the fossilized remains of a biological relative of human beings who lived about 1.7 million years ago.

It is rare to find fossils from the hominid family tree. Finding one with such well-preserved evidence of a tumor is rarer still.

It seems that cancer has been with us for quite some time, and this finding highlights one of the most fascinating questions about it: why cancer exists in the first place.

Cancer is a deadly disease and would have been particularly lethal before the recent development of effective treatments. So why didn’t it – or our susceptibility to it – die out long ago?

To put the question somewhat differently, why should organisms, including human beings, carry within our DNA the instruments of our own destruction – tumor suppressor genes and oncogenes just waiting for environmental insults before they kill their carriers? Shouldn’t organisms with such genes be selected against in the evolutionary competition to survive and reproduce?

Before addressing that question, let’s go back to the 1.7-million-year-old tumor.

The researchers found the cancer in a metatarsal, one of the long bones of the foot found just behind the toes. The researchers examined the specimen with high-resolution x-rays, revealing the lesion in greater detail and producing a three-dimensional image, which revealed an “irregular spongy woven bone texture with a cauliflower-like external appearance.” In other words, the cells of the tumor had grown in a disorganized fashion and were ballooning out from the shaft of the bone – features of a malignancy. They concluded that it was a bone cancer, probably an osteosarcoma.

As a radiologist working in a children’s hospital, I regularly see x-ray, CT and MRI scans of patients with osteosarcomas. They account for a fraction of all primary bone cancers, and are most often diagnosed in adolescence and young adulthood. One unusual feature of the South African report is the location of the tumor – the leg and arm are much more common sites than the foot.

Osteosarcomas aren’t just found in humans. They represent the most common bone malignancy found in dogs and cats. In fact, osteosarcomas are more common in dogs than people, especially in large species such as greyhounds and great danes.

Cancer has been around for much longer than 1.7 million years. In Indianapolis, our Children’s Museum features the fossilized skull of a Gorgosaurus, a relative of Tyrannosaurus rex which lived during the Cretaceous period about 70 million years ago. It shows clear evidence of a golf-ball-sized mass inside the skull cavity.

One challenge in attempting to understand the causes of cancer is the fact that cancer is not a single disease.

There are many different types of cancer, which can be categorized according to the organ in which they originate – lung cancer, colon cancer, breast cancer and so on. Better yet, they can be categorized by the type of tissue they represent. For example, carcinomas arise from epithelial or lining cells, sarcomas from connective cells, and leukemias from blood-forming cells.

What we call cancer really represents a family of disorders, all of which can be lumped together because of a common feature – disrupted regulation of cell growth.

For example, genes that normally suppress cell growth may be damaged, leading to uncontrolled proliferation. An indication that all cancers are not the same is the fact that they have very different prognoses and treatments.

Today evidence suggests that many cancers can be traced to environmental exposures, such as tobacco, dietary carcinogens, infections, and air and water pollution. It seems unlikely that tobacco or air pollution could have caused cancer millions of years ago, but it’s possible that some dietary and infectious agents may have been more common in the remote past.

One of the first explanations for how cancer could result from chromosomal damage was provided by a medical school professor of mine at the University of Chicago, Janet Rowley, M.D. In the 1970s, Dr. Rowley showed that in many patients with a type of leukemia, CML, portions of chromosomes 9 and 22 had been exchanged, proving that changes in DNA could lead to cancer.

Part of the blame for cancer may be placed on a rather unexpected culprit, a molecule without which human life would be utterly impossible – oxygen. Oxygen is necessary for our cells to convert food to energy. This is one of the reasons that the human body is equipped with over 60,000 miles of blood vessels, which enable red blood cells to carry oxygen to each of our 75 trillion cells.

But oxygen is not an entirely benign molecule. In fact, it is highly reactive and even toxic in high concentrations. And early in Earth’s history, oxygen levels began to rise dramatically, as plants capable of photosynthesis – a process that produces oxygen – proliferated. More oxygen permitted the development of multicellular organisms capable of transporting oxygen to all of their cells.

Oxygen becomes problematic when superreactive forms of it are formed. For example, when ionizing radiation strikes a cell, it can form superoxides that react avidly with nearby molecules. When one of the nearby molecules is DNA, damage to genes occurs, producing mutations that can be carried from one generation of cells to another. In some cases, a transformation to cancer may result.

Will cancer always be with us?

Another reason that cancer has persisted is the fact that it tends to be a disease of older organisms. Only 1 percent of the cancers diagnosed each year in the U.S. occur in children. So for most of our biological history, when life expectancy was shorter, hominids reproduced and died of other causes long before cancer had a chance to develop.

In advanced countries today, mortality rates due to other diseases, such as infections, heart disease and stroke, have fallen so far that many more people are living to advanced ages, by which point the series of mutations necessary to induce cancer have had sufficient time to occur. In effect, rising cancer rates are in part a sign of general good health and longevity.

Can we make cancer disappear? The fundamental problem with cancer cells is that they do not know when to stop growing and die, and as a result, they keep proliferating in an uncontrolled fashion. While this is highly injurious to the organism, the existence of genes that promote cell growth is obviously crucial for organisms to grow and survive in the first place.

Consider an automobile. Just two weeks ago, the brakes on my car failed, a dangerous situation. We might wish that cars were built so that the brakes could never fail, but the only way to eliminate the possibility of brake failure would be to do away with the brake system altogether, a far more hazardous proposition.

The same thing can be said about cancer. We might wish that we were built without genes that can contribute to the development of cancer, but normal growth and development – and yes, even death – might not be possible without them. When it comes to life, we must take the bad as well as the good, though this is not to say that we cannot make strides in preventing and curing cancer.

The finding of cancer in the bone of a 1.7-million-year-old human relative isn’t just a biological oddity – it is a reminder of what it means to be both alive and human. Life is fraught with hazards. Thriving biologically (and biographically) does not mean eliminating all risks but managing the ones we can, both to reduce harm and promote a full life.

Richard Gunderman is Chancellor’s Professor of Medicine, Liberal Arts, and Philanthropy at Indiana University. This article was originally published on The Conversation. Read the original article.