Born to Squeeze? Not me

You’ve heard the jokes. They’re not funny. What’s the difference between an accordionist and a terrorist? A terrorist has sympathizers. Not funny, I tell you. 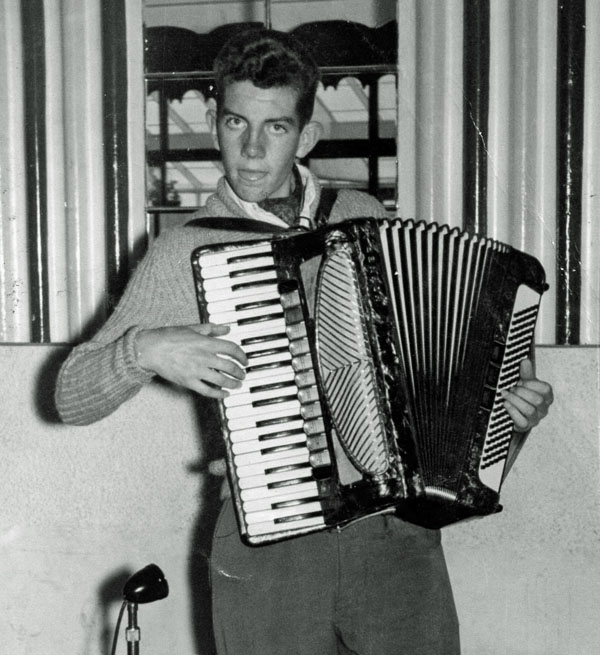 Syndicated cartoonist Gary Larson (The Far Side) used to lead the insult brigade. He put his favorite on a greeting card sold all over the world. The caption read, “Welcome to Heaven, here’s your harp. Welcome to Hell, here is your accordion.” Not funny? All right, maybe a little bit funny.

Accordionists get no respect. I know. I used to be an accordionist. OK, still am. No respect I get.

My mother made me do it. I was not born to squeeze. My mother decided I should learn the instrument after being captivated by a man selling lessons door to door. I wish I had answered the door that day.

Would that I had known then what I know now. Accordionists are the Rodney Dangerfields of the music business. They get respect from nobody, not even from other musicians. Not from banjo players, not from tuba players, not from bagpipe players. And if they play the piano-style accordion — as opposed to the button-type instrument — they get no respect even from fellow accordionists. The humiliation knows no bounds.

But I’m not alone. Deborah Norville, host of CBS Television’s Inside Edition, is a closet piano accordion player. So I’ve read on various websites. Not much of a role model, I concede. But a role model, nonetheless.

There were no role models for me when I was a kid. I did read once that there was a game show on television in the Soviet Union called Play Your Accordion. But I never saw it. I never even saw the Lawrence Welk Show. Ireland didn’t have television when accordionist Myron Floren was being featured on the Welk Show with his celebrated performances of Lady of Spain and Roll Out The Barrel.

Accordionist Stanley Dural, who goes by the stage name of Buckwheat Zydeco, refused to play the accordion as a kid because he considered it the instrument of his grandfather’s generation. I know how he felt. The Golden Encyclopedia of Music by Norman Lloyd describes the accordion as “an organlike piece of furniture dear to the Victorians.” No respect.

Weird Al Yankovic would have refused to play the accordion as a kid, he says, but his mother found a way to convince him. She told him his grandmother would pay him a dollar every time Al came over to visit. He took his training at the Famous Zamour Academy of Music. It says so in his 1985 biography, The Authorized Al.

My mother used another kind of persuasion. She encouraged me to enter accordion contests. She told me my father would be proud of me, if I won. I came third in a band competition, playing in a group with 10 other accordionists. The Irish Washerwoman and Rakes of Mallow were the tunes. My father was not impressed. No respect. I gave up the accordion for 10 years, took up the guitar, learned the words of The House of the Rising Sun, and became a minor participant in the 1960s folk music revival.

I came to Canada in 1966, and met a fellow emigrant, Shay Duffin, who was recording an album of Irish songs. He was looking for musicians. I offered my services as a piano player. “I was hoping you could play accordion,” he said. I accepted the inevitable, and bought a second-hand accordion. Three second-hand accordions later, I am still playing. I have done Oktoberfests, dinner music engagements, weddings, and walk-on appearances at convention dinners. I have played polkas, jigs, and many choruses of Lady of Spain. My back is killing me, but I’ve actually grown to like this much-maligned instrument. Why? Because of its versatility and its distinctive sound.

An accordion is like a portable reed organ. By changing the stops you can make it sound as thin and reedy as a harmonica or as powerful and majestic as a cathedral organ. The accompaniment buttons on the left side produce a full array of bass notes and chords while the bellows allow you to sustain the right-hand melody notes like the brass and woodwinds of an orchestra. It’s the original one-man band.

The public attitude toward the instrument finally seems to be changing, I’m happy to say. In 1990, the city of San Francisco named the accordion its official instrument. The move came after a group of accordion terrorists, wearing bandannas and dark glasses, stormed local restaurants and played their festive polkas until management threw them out. The Accordion Liberation Front, someone called them. I’m not making this up. I read it in Time magazine. When lead accordionista Tom Torriglia was asked about the raid, he proudly declared, “June is National Accordion Awareness Month.” The mayors of other North American cities began to issue proclamations.

The cities of Detroit, Skokie, Ill., and St. Paul, Minn. soon followed suit. There are now 80,000 self-admitted accordionists in the United States. Using the standard 10 per cent formula of the statisticians, that means there should be 8,000 practising accordionists in Canada. Paul Simon, Billy Joel and Bruce Springsteen have used the instrument on their records. David Byrne, director of the movie True Stories, is a charter member of the Dallas chapter of the Texas Accordionists Association. A band called Those Darn Accordions has been written up in The New York Times. Respect may at last be within reach.

I truly hope so. We have been denied respect for far too long. It has been 82 years since accordionist Cornell Smelser, backed by the Ohman-Arden Orchestra, was invited to play Gershwin’s Rhapsody in Blue on National Public Radio. The last television series to use the instrument for its theme music was Wagon Train. I want respect because I want people to stop telling accordion jokes. I want people to start telling tuba jokes. What’s the range of a tuba? Fifty yards, if you’ve got an arm like the quarterback for the Green Bay Packers.

Adapted from a story originally published in the Toronto Star, Edmonton Journal, and other newspapers, in 1996

Brian Brennan is an award-winning Irish journalist and author who lives and works in Canada. His latest book is an autobiography, Leaving Dublin: Writing My Way from Ireland to Canada. Read his blog at  http://brianbrennan.ca/blog/

References and further reading:
The word accordion comes from the German word “akkord” which means “agreement, harmony.” In China, the accordion is known as the “sun-fin-chin.” In Russia, it is the “bayan.” In Norway, the “trekspill.” In Italian, the “fisarmonica.”

On April 18, 1939, Joe Biviano, Abe Goldman and Gene von Halberg became the first musicians in history to play the accordion in Carnegie Hall. Their selection: Bach’s Toccata and Fugue in D minor, a familiar piece to Phantom of the Opera fans.

Pietro Deiro, known by all accordionists as The Daddy of the Accordion, was born in Salto, Italy in 1888. He established a vaudeville career in San Francisco, and recorded for RCA Victor. He died in 1954. The first colour documentary about accordion production was released the same year.