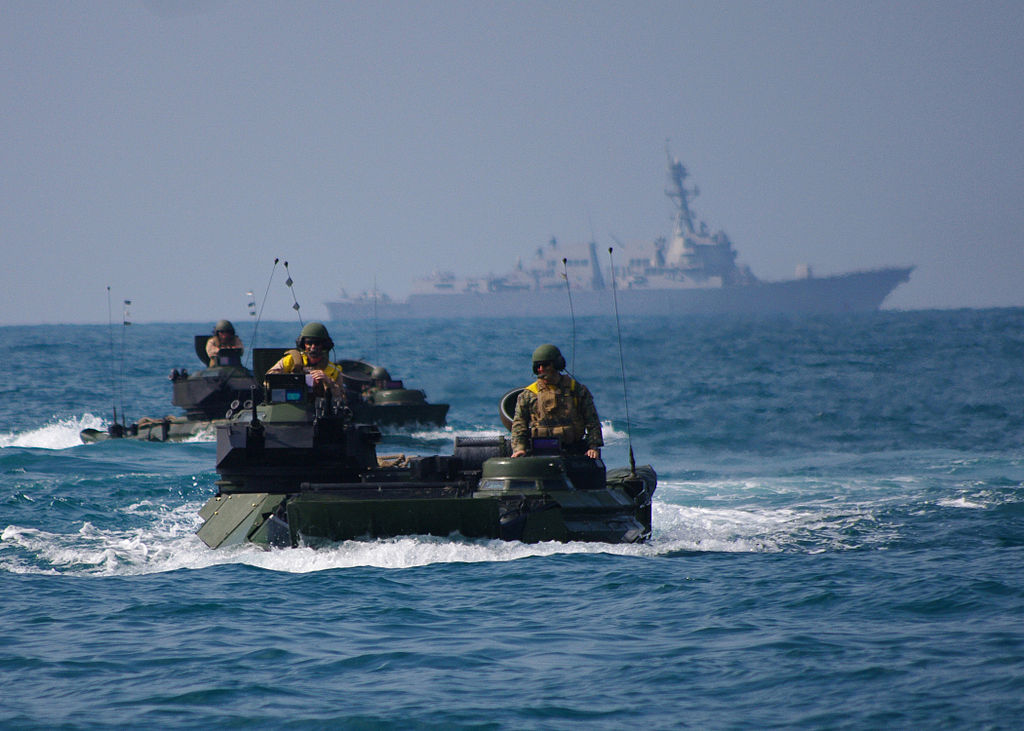 Amphibious assault vehicles and USS Denver participate in an exercise in the South China Sea, 2011. U.S. government photo via Wikimedia 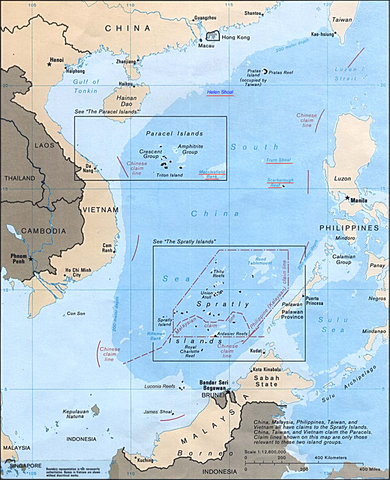 At long last, the Beijing regime has this week been dealt two significant set-backs to what is the world’s most extraordinary contemporary campaign of imperial expansionism.

On October 29, a tribunal under the United Nations Convention on the Law of the Sea (UNCLOS) decided that Beijing’s claim to own almost all the South China Sea is not an indisputable fact, as the Chinese government contends. The littoral countries that object to Beijing’s imperial grab — the Philippines, Vietnam, Malaysia, Brunei and Indonesia — have the right to have their objections heard and judged before a court of arbitration.

The ruling is significant because Beijing has always avoided any binding judicial scrutiny of its South China Sea claim. Beijing’s usual response is to jump up and down, make a lot of threatening noises and insist its claim is beyond dispute.

Typical was President Xi Jinping’s response a few weeks ago when he was challenged about the claims while on a visit to the United States. “The islands and reefs of the South China Sea are Chinese territory since ancient times,” he said. “They are left to us by our ancestors.”

Well, there’s no substantial evidence to support that claim. And now it may well be that the Permanent Court of Arbitration in The Hague will adjudicate on the dispute.

It would be pleasant to believe that Beijing’s imperialist march might be halted and reversed by an adverse court ruling. But that is probably a vain hope. The Chinese Communist Party has a lot of problems with the concept of the rule of law, and whatever The Hague says is unlikely to deter it from its territorial ambitions. 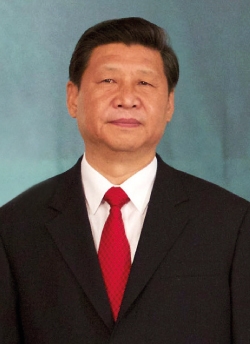 Thursday’s legal rebuff to Beijing’s schemes came hot on the heels of Tuesday’s more direct challenge to the Chinese Communist Party’s attempt to establish sovereignty in the South China Sea. For two years, fleets of Chinese dredgers have been at work in the sea manufacturing seven new islands hundreds of kilometers away from China. The finished islands have been equipped with harbours, air strips and military bases.

Beijing says these islands are just a physical expression of its rule over four-fifths of the South China Sea and all foreign shipping should respect China’s sovereignty.

On Tuesday, after years of wavering in the face of Beijing’s evident forward policy, the risk-averse United States administration of President Barack Obama sent a guided-missile destroyer, the USS Lassen, to challenge China’s claims to authority over shipping on the South China Sea.

After giving plenty of warning that this was to be a “freedom of navigation operation,” affirming the right of passage to all navies and merchant marine through what are some of the world’s busiest seaways, the USS Lassen purposefully sailed within 12 nautical miles of Subi Reef in the Spratly Islands group.

Two years ago Subi Reef was just that; an underwater feature that was usually not even exposed at high tide. But after months of dredging and construction work Subi Reef is now a substantial island with a harbour and a three kilometer-long runway that can be used by most Chinese military aircraft.

Beijing contends that Subi Reef, like all the other reaches of the South China Sea it claims right down to Indonesia 1,200 kilometers from mainland China, is now its sovereign territory. As such, says Beijing, this and the other six manufactured military island outposts warrant recognition under the Law of the Sea as having 12 nautical miles of territorial waters around their peripheries and 200 nautical miles “exclusive economic zones” (EEZ) beyond that.

Indeed, Beijing’s whole claim to ownership of most of the South China Sea is a feeble modern fabrication without any historic or legal merit. For the most part it has been fashioned since the Second World War and the discovery of seabed oil and gas deposits in the 1970s.

Beijing has produced an elaborate paper trail to support what it says is unshakeable proof of its ownership of most of the 3,500,000 square kilometer South China Sea, which carries a third of global maritime trade. The paperwork has been craftily woven and is now a substantial blanket of documentation. But several careful deconstructions, for example this by former BBC correspondent Bill Hayton have found that what is put forward as evidence of Chinese ownership all reaches back to the writings of two or three nationalist propagandists. There is no unimpeachable firsthand evidence of historic Chinese claim to sovereignty over the islands of the South China Sea.

There has been a sharp increase in Beijing’s often militarily aggressive pushing of its territorial claims since Xi Jinping became Communist Party boss and China’s President in late 2012. His intense appeals to Chinese nationalism and patriotism appear to be an attempt to divert public attention from the declining economy, deadly environmental pollution, the emergence of a socially dominant wealthy elite of friends and relatives of the Communist Party aristocracy, and a steady drum beat of social unrest. (See related columns, below.)

Yet the record of Xi’s four years in power suggests that when confronted he swiftly retreats.

In his first years in office, Xi stoked Chinese nationalism by confronting the old enemy, Japan, over Japanese ownership of the Senkaku Islands in the East China Sea. These five islands, which the Chinese call the Daioyu, have been claimed by Beijing since they were found to be associated with seabed deposits of natural gas. The Senkakus also have strategic importance, blocking the PLA Navy’s access to the Pacific Ocean.

But incursions first by Chinese fishing boats, then by Coast Guard cutters and finally by PLA warplanes over-flying the islands did not force Tokyo to make any concessions. Quite the reverse. Beijing’s antics gave Japanese Prime Minister Shinzo Abe the justification he was looking for to remove restrictions on the use of the armed forces that had been in place since the Second World War.

The Chinese incursions also pushed Tokyo and Washington to re-affirm their military alliance. And they raised alarm in the capitals of South East Asia, leading them to wonder if they were next in line for Beijing’s aggressive attentions.

They were right. Xi shifted his focus to the South China Sea where Chinese vessels began confronting the Philippines and asserting ownership of reefs and islands clearly within Philippines’ waters.

At the same time, Beijing began pushing hard against Vietnam, harassing Hanoi’s maritime survey vessels and even ostentatiously sending a massive drilling rig to hunt for oil and gas in disputed waters.

A PLA naval flotilla was even sent to the southern limits of China’s South China Sea claim, right by Indonesia’s territorial waters, where the crews held an elaborate sovereignty ceremony.

Meanwhile, Beijing set up a faux “administration” for the South China Sea on Woody Island in the Paracel Island chain and began manufacturing the seven islands to hold military bases.

All of these moves have been individually too small to trigger emphatic responses from either the United States or China’s neighbours, singly or in coalition.

But the emerging picture is already very clear. Beijing has established de facto occupation and a substantial military presence over territory to which it has no legitimate legal claim. More than that, it is territory of great strategic military and economic significance to the U.S. and its Asian allies.

The push-back by the court in The Hague and the U.S. Navy will give Xi and his admirals pause for thought. They will have immediately noted, however, that Obama’s sending of one destroyer, the USS Lassen, to demonstrate Washington’s resolve is a far less robust response than what Bill Clinton did in 1996.

That year, Beijing tried to disrupt the first fully democratic presidential elections among the 23 million people of the independent island nation of Taiwan, which Beijing also claims to own without any substantial historic or legal justification, by firing unarmed missiles into the sea-lanes approaching the island’s ports. Clinton responded by dispatching a full aircraft carrier battle group, which sailed through the 160-kilometer-wide Taiwan Strait separating the island from China. When the island next held presidential elections four years later, Beijing confined its outrage to verbal bluster.

Beijing is now most likely to return to its salami slicing policy by building up the military resources on the islands its has constructed. It may also try to test Washington’s credibility as a strategic partner by confronting some of the smaller claimants to the waters of the South China Sea to see how strongly the U.S. supports its allies.

On the other side of the equation, the U.S. already has strong alliances with regional nations Japan, South Korea, Thailand, Singapore, and Australia. Vietnam, the Philippines and Indonesia have already shown they want stronger military alliances with Washington to counter the threat from China.

What would send a strong message to Beijing would be a joint “freedom-of-navigation” patrol by ships of the U.S., Vietnam and Philippines navies.

China manufactures islands to back its sovereignty claims, Jonathan Manthorpe

TOKYO, Japan — China’s war to supplant the United States as the regional super power in the Far East and western Pacific is under full steam and gobbling up its objectives.