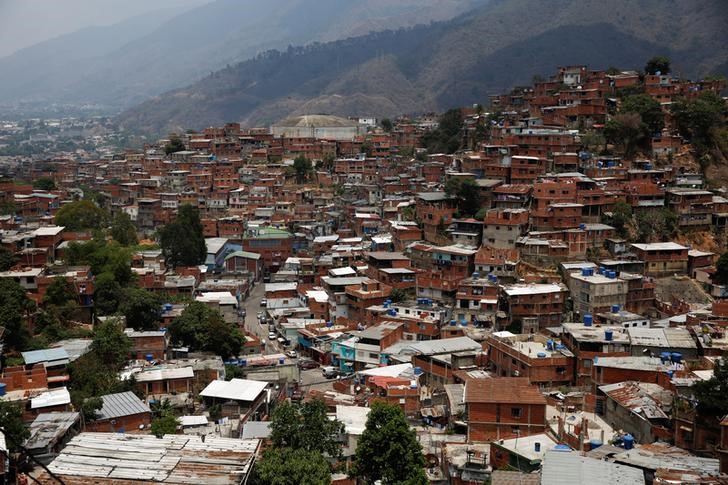 A non-operative water tank is seen in a neighbourhood called “The Tank” in the slum of Petare in Caracas, Venezuela, April 3, 2016. Although their nation has one of the world’s biggest hydroelectric dams and vast rivers like the fabled Orinoco, Venezuelans are still suffering water and power cuts most days. The problems with stuttering services have escalated in the last few weeks: yet another headache for the OPEC nation’s 30 million people already reeling from recession, the world’s highest inflation rate, and scarcities of basic goods. President Nicolas Maduro blames a drought, while the opposition blames government incompetence. REUTERS/Carlos Garcia Rawlins

This weekend’s largest military exercises ever by Venezuela may reveal whether the country is heading merely for an accelerated political and economic melt-down, or a full-blown civil war.

Besieged President Nicolas Maduro authorised the demonstration of military might as public clamour mounts for a referendum to depose him. Nearly two million people have signed a petition demanding his recall. Four million signatures are needed under the constitution — and polls show about 70 per cent of the country’s 30 million people want Maduro out of office this year.

Maduro has dismissed the referendum call, and he imposed a state of emergency a week ago, giving himself added powers to impose civic order and control the economy. On Friday, the Supreme Court ruled that Maduro’s emergency decree is constitutional in the face of “the extraordinary social, economic, political, natural and ecological circumstances that are gravely affecting the national economy.”

Maduro was also responding to a tidal surge of street demonstrations sparked by shortages of even the most basic commodities, regular power cuts, and water rationing. Protesters have been dispersed by riot squads using truncheons and tear gas.

On Thursday, Maduro warned that the country faces “a state of internal upheaval,” and threatened to ratchet up the response by security forces. In this climate, the military exercise and the Supreme Court ruling are far more likely to heighten tensions, with the prospect of expanding violence, than to damp them down.

One element of the economic crisis is that many factories have stopped working, saying they cannot buy the necessary components and ingredients for their products. Even the country’s main brewery has pulled down the shutters because the owners say they cannot import the barley they need to make beer. On Friday, Coca Cola announced it is suspending production in Venezuela because of a shortage of sugar.

Maduro this week threatened to take control of closed factories if their owners do not re-open them. The factory closures, he says, are part of a right-wing conspiracy to eject his government. Maduro, blames the country’s ills on opposition to his party’s socialist revolution by Venezuela’s conservative business and industrial classes, and United States “imperialism.” He accused the U.S. of sending spy planes into Venezuela’s airspace, an echo of past accusations by Caracas governments that Washington is attempting to engineer regime change.

Venezuela’s simmering political discord came to a head in December when the opposition Unity Movement won a two-thirds majority in the National Assembly. That win came after a campaign in which the opposition pledged to remove Maduro from office before his six-year term is up in 2019. The plan is to demand a referendum to recall Maduro, and to trigger a new election rather than have him succeeded by his Vice-President, Aristobulo Isturiz.

Maduro is a former bus driver and union leader who rose to be Vice-President in the United Socialist Party administration of the buffoon braggart, President Hugo Chavez. When Chavez died in 2013, Maduro succeeded him, but won only a shade over 50 per cent of the vote in a special election held soon afterwards. Since then, Maduro has ruled by decree, though to say he has “ruled” is overgenerous. His three years in power are marked by an extraordinary inability to come to grips with any of the ills besetting Venezuela.

But then, he inherited a poisoned chalice.

Chavez, an army captain, dreamed-up the authoritarian socialist “Bolivarian Revolution” that has destroyed what was once one of Latin America’s best performing economies. This socialist theology was based on a selective and myth-infused reading of the story of South America’s 18th and early 19th century “liberator,” Simon Bolivar. Chavez first used his soap opera philosophy to try to launch a military coup in 1992. When that failed, he went semi-legit, and won the presidential election in 1999. He remained president until he died of cancer in 2013. In a move worthy of the iconography of North Korea’s ruling Kim family, Chavez in July, 2014, was declared Venezuela’s “Eternal President.”

As he struggles to cling to power, Maduro is evoking the revolutionary imagery and verbiage of the 1960s and 1970s that inspired Chavez and made him the best friend of the withering Castro brothers’ regime in Cuba. “We are going to tell imperialism and the international right that the people are present with their farm instruments in one hand and a gun in the other … to defend this sacred land,” Maduro said this week.

Venezuela, which has the world’s largest oil reserves – larger even than those of Saudi Arabia – has one of the world’s worst-performing economies. The economy shrank by about 10 per cent last year according to the International Monetary Fund. The economic performance is expected to be even worse this year.

Seldom, if ever, has there been a more pitiable example of the perils of the “Dutch Disease” – the deplorable effects on the economy or over-reliance on the export of natural resources. Oil accounts for 95 per cent of Venezuela’s exports and 50 per cent of its gross domestic product. The Caracas government formerly needed international oil prices of only about $US50 a barrel to cover all its spending obligations. While the price has been up around $US100 a barrel for the last few years, Chavez and Maduro should have been stuffing money away for non-oil economic development and a sovereign wealth fund. Instead the money wafted off into clouds of corruption and ideology-inspired economic nonsense. The result is that the government now needs the international price of oil to be up around $US120 a barrel in order to cover its budget. That is unlikely to happen in the foreseeable future.

The fall-out from nearly 17 years of this comic opera is tragic.

Inflation is running up around 300 per cent, and could approach 1,000 per cent by next year. Unemployment is at 17 per cent, is much higher among younger work-age Venezuelans, and will probably reach at least 21 per cent this year.

More than 70 per cent of Venezuelans live below the World Bank poverty line, of incomes worth less than $US2 a day. This too will likely get worse over the course of this year.

One social consequence of the government’s gross ineptitude is that Venezuela has the second highest murder rate in the world, just behind Honduras. The capital, Caracas, has the worst murder rate of any city outside declared war zones.

What is surprising is that the ruling United Socialist Party has not removed Maduro to try to avert the looming crisis. One reason is that the party’s name is inaccurate. It is not united. It is a grab-bag of querulous factions who, like their strutting rooster founder Chavez, are unable to demean themselves to compromise, even as the driverless bus rushes towards the cliff.

Opposition leader Henrique Capriles said this week Venezuela is “a time bomb that can explode at any given moment.” His Unity Movement and other opposition groups have promised further demonstrations demanding Maduro’s departure, even in the face of Maduro’s threat to use the army against protesters.

Capriles says Venezuela is approaching a “moment of truth.” Truth has little to do with it. What will determine the outcome is what the army decides to do in the next few days and weeks.

Venezuela’s struggle to keep the lights on, by Reuters  Report/Photo-essay

Residents of Venezuela’s southern city of Puerto Ordaz enjoy pleasant views of the Orinoco and Caroni rivers and are a half hour’s drive from one of the world’s biggest hydroelectric dams. Yet most days they suffer water and power cuts.

Venezuelan opposition fractures over ballots or bullets to win power. by Jonathan Manthorpe, column (from our 2014 archives)