Vancouver, from a ship in the Salish Sea. Photo by Deborah Jones © 2014 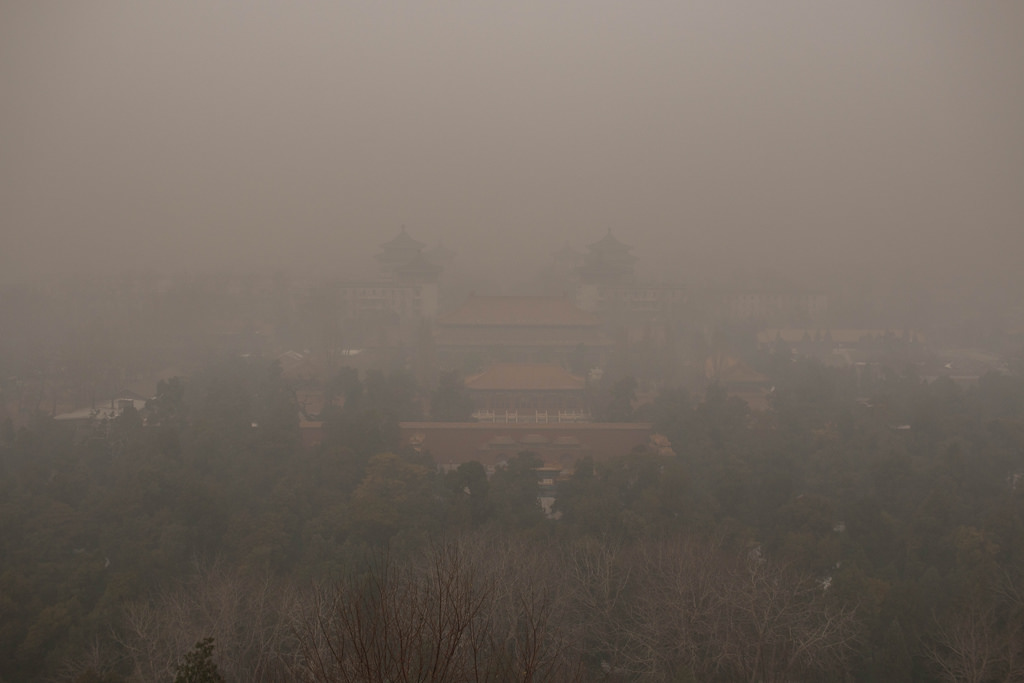 Beijing in smog on Nov. 29. Photo by LWYang/Flickr/Creative Commons

Vancouver’s grossly inflated housing market, the United Nations’ climate conference in Paris and China’s catastrophic environmental degradation were all linked this week in a circle of cause and effect.

On Tuesday the authorities in Beijing declared air pollution in the Chinese capital to be “hazardous to human health,” and issued a “red alert,” closing down many of the city’s services, banning outdoor sports and restricting travel.

Beijing’s notorious “smog” caused by industrial air pollution being trapped over the city by unfavourable weather conditions reached 400 microgrammes per cubic metre (mg/m3) on the air quality index. But Chinese authorities regularly ignore much worse air pollution, which is a curse throughout the country, and especially in the highly industrialized south and east coast regions. Chinese authorities estimate that air pollution kills up to 500,000 people a year, but foreign health experts put the number of deaths at well over one million.

The World Health Organization says 10 mg/m3 air quality is safe, but in China, and Beijing in particular there have been many occasions when levels of 800 mg/m3 have been recorded. The situation in the capital is so bad that the United States embassy has taken to taking its own air quality readings every day and posting them on Twitter. Chinese authorities have reacted angrily to what they say is an “unlawful” act of diplomatic rudeness.

But on Tuesday, the Beijing authorities appear to have been embarrassed into issuing the “red alert” by the international attention the pollution got, coming in the middle of the Paris conference. Also it was only last week that China issued a commitment to cut emissions of major pollutants from its mainly coal-fired power stations by 60 per cent by 2020.

The pollution and gross degradation of China’s air, earth and water is now much more than an embarrassment to the Communist Party authorities, 30 years after it embarked on industrialization without thought for the environmental consequences.

While China’s lethal air quality is in the headlines, it is probably water pollution that is the greatest killer and threat to the country’s environmental sustainability.

A government study a few years ago, found that most of China’s underground aquifers, which provide 70 per cent of the country’s drinking water, are irredeemably polluted. The aquifers supplying 90 per cent of China’s cities are polluted. The water in more than 75 per cent of rivers flowing through China’s cities is unsuitable for drinking or fishing, and 30 per cent of river water throughout the country is too polluted to be used for industry or agriculture. As a result, much of the food produced in China is toxic at various levels. Nearly 700 million Chinese – over half the population – drink water contaminated with human or animal waste.

There are no reliable figures about pollution of China’s sparse stocks or arable land. But it is notable that very many of the protests by Chinese are against either proposed or existing chemical plants and factories they accuse of polluting earth, air and water.

China’s appalling pollution problems are now the country’s top public issue, and one on which the continued political legitimacy of the Communist Party hinges. 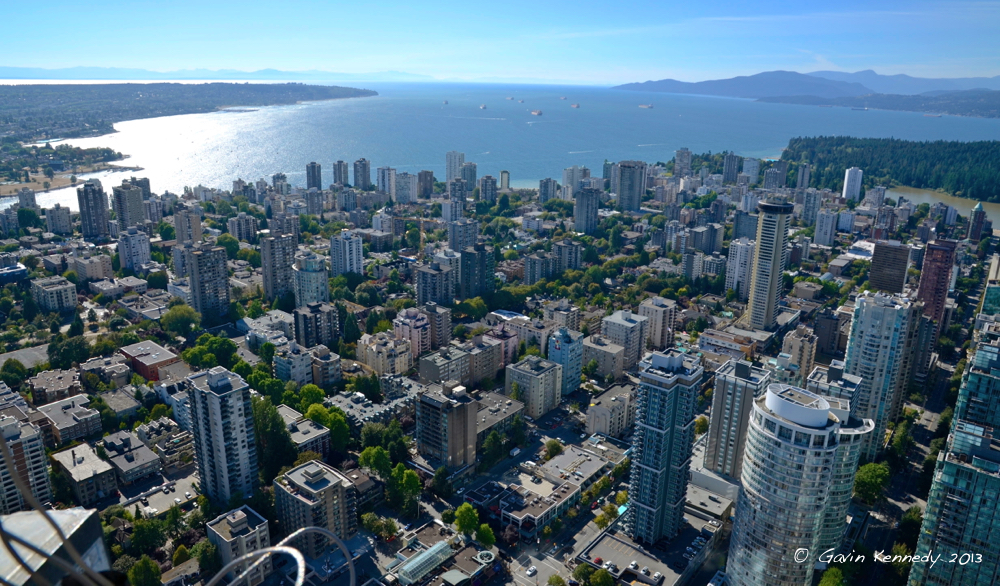 And that brings us to unsustainably inflated housing prices in cities favoured by fleeing Chinese.

Several polls in recent years by organizations such as The Hunrun Report and LIO Global have asked the fabulously wealthy members of the princeling and aristocrat classes in and around China’s Communist Party why about half of them want to emigrate as quickly as possible.

Consistently, the two main reasons given have been the lethally toxic pollution of China’s environment and, as a result, that much of the food produced in the country is poisonous. (The third reason given is wanting a good education for their children.)

Wealthy Chinese continue to get their money out of China by any means possible – most of them illegal – at ever faster rates. People’s Bank of China statistics for the first three months of this year indicated that $US80 billion fled China illegally in that period. That suggested that the illegal flight was on track to match last year’s total of $US324 billion, estimated by the UBS Group. But then in early August, China devalued its currency, the renminbi, and the flood turned into a torrent. Goldman Sachs estimates that $US200 billion was spirited out of China in the three weeks following the devaluation. The financial news agency Bloomberg, calculates that $US194 billion left China in September.

How much of this came to Canada may never be known, because Canada does not keep records of the country of residence of beneficial owners of property or companies. That anonymity is one of the great attractions of Canada to wealthy Chinese who want to hide their overseas holdings in case the political winds that always swirl around the Communist Party turn against them.

Those who have grown grossly wealthy on the profits of China’s 30-year manufacturing boom have, of course, the option to leave for their favourite sanctuaries, in the United States (52%), Canada (21%) and Australia (9%).

But, as is always the case, it is the poor or less well-off who are left to suffer. China’s blue collar classes, whose labour for rock-bottom wages and often in conditions not far off slavery, has filled the pockets of the Communist Party’s aristocracy, are just as furious and scared about what has been done to their country in the name of economic advancement.

But instead of heading to the airport, ordinary Chinese are protesting in the only way they can, and taking to the streets.

There are about 500 major protests and riots across China every day involving between 1,000 and 5,000 people. The Beijing government used to publish annual reports on the number of “mass incidents” involving over 1,000 protesters, but stopped doing so in 2008 when the numbers became embarrassingly large.

However, the numbers are still assembled and can be acquired through the right contacts. Most well-connected analysts inside and outside China agree there have been about 180,000 riots annually in China, for many years, though some put the number now as high as 250,000, or over 680 a day.

Many of these protests become violent and the authorities call out riot squads or the People’s Armed Police to restore order. In some areas where the links between the local Communist Party and the triad criminal gangs are especially strong, the authorities don’t bother with the police. They just call on triad gang fighters, whose methods of crowd control make even the Chinese police seem like gentlemen.

Until a few years ago the main cause of these outbursts of public discontent was corruption by local Communist Party or government officials. Usually, this involved theft of villagers’ land to sell to real estate developer buddies in return for backhand payoffs and cuts of the profits.

As the global recession began to hit China’s manufacturing industries after 2008, the protests were frequently against factory owners who had done a midnight flit to avoid paying their workers, or other examples of employer chicanery.

But public outrage at pollution or the threat of further environmental degradation has now become the spur for more than half the 500 riots every day, according to the 2012 “Social Unrest in China” report for the European Union.

Toxic pollution of earth, air, water and food remains the main cause of popular outrage in China. The Communist Party is well aware of the public anger, and is glumly contemplating the prospect that it might be the first regime in modern history to be ousted because it poisoned its citizens in order to feather its own bank accounts.

However, it is unlikely China’s people will rise up in the foreseeable future against their government in defence of their environment. Not least of the reasons to doubt the prospect of a national uprising is that the Communist Party has intensified the reach and efficiency of its authoritarian power since the new President and party boss Xi Jinping came to power at the end of 2012.

Since the 1989 students’ uprising in Tiananmen Square, successive Communist Party leaders have been swift to slit the throat of any organization that threatened to become a national focus of opposition to the regime. Xi pursues that survival strategy with even more vigour than his predecessors. The most compelling current evidence of his determination to smother even the most tentative questioning of Communist Party power is Xi’s campaign against China’s fledgling community of lawyers dedicated to the rule of law and an independent judiciary.

Since Xi came to power, scores of lawyers have been detained, dozens tortured and many are facing trial and imprisonment. Their supposed crimes are variations of a common theme: they have been “picking quarrels and provoking trouble” by defending or advocating for people the Communist Party wants to lock away.

Even among my most Sinophile friends there are now regular discussions over whether or not China can be accurately described as a fascist state. Majority opinion is that it has moved from authoritarianism into fascism. Some Sinophile friends quote contacts within the upper echelons of the Communist Party saying they fear they have in Xi chosen a new Mao Zedong as leader.

Mao, of course, had more blood on his hands, most of it of his fellow Chinese, than any leader of the 20th Century. Much of the last nearly 40 years since his death has been a half-hearted attempt to undo the evil Mao did. Half-hearted because as the rising tide of environmental degradation shows, without political accountability and the rule of law, China is destined to repeat past mistakes.

No wonder everyone who can wants to get out.

The recent assault by President Xi Jinping on China’s community of human rights lawyers may be too late to insulate the Communist Party against a coming storm. There is a tacit acknowledgement by the party that China’s swelling community of about 300 human rights lawyers, their associates and like-minded advocacy groups have become a serious challenge to the one-party state.