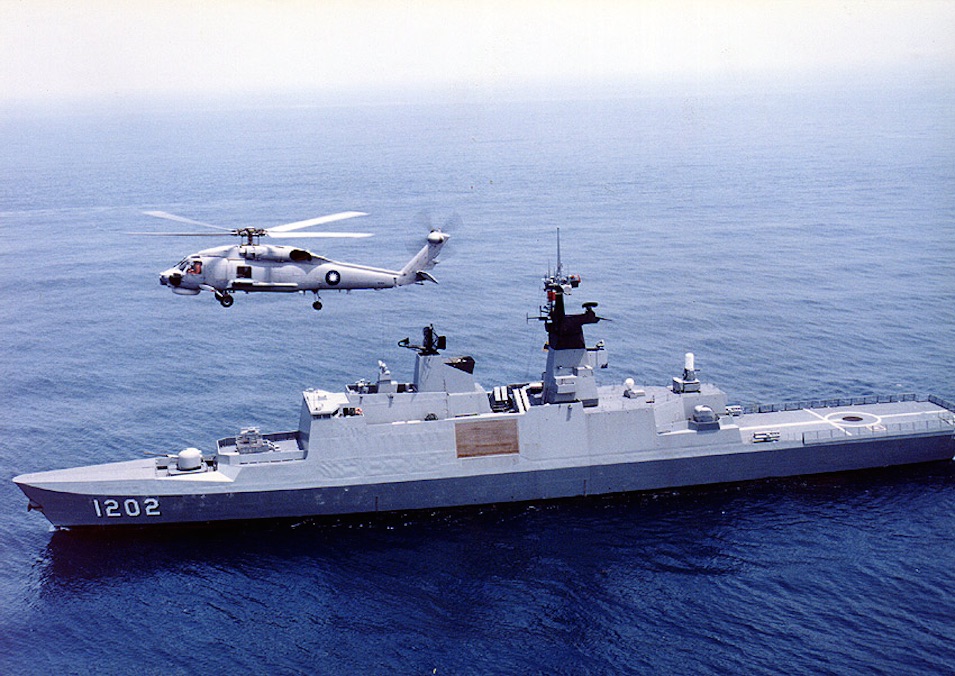 Taiwan’s Lafayette-class frigates from France that patrol the waters around the island nation are storied warships, and not because of naval engagements won, lost or survived. REPUBLIC OF CHINA NAVY PHOTO/VIA WIKIMEDIA COMMONS

The reported death in Britain of Andrew Wang at age 86 draws a line under one of the most sordid arms dealing, murder and bribery scandals in modern French and Taiwanese history. But the death of Wang, one of Taiwan’s 10 most wanted fugitives and the chief suspect in the murder at the heart of the scandal, means that key elements in the story may never be unravelled. And what a story it is.

It has the French arms manufacturer Thomson-CSF paying hundreds of millions of dollars in bribes through its agent Wang to get the Taiwan government to make a $2.8 billion deal to buy six of the company’s Lafayette class frigates. When the French foreign minister objected to the sale because it might harm relations with China, the arms company conscripted his mistress to change his mind, with great success.

Meanwhile, an honest Taiwan Navy captain, Yin Ching-feng, investigated the deal, visited the French shipyards and came home in September, 1993, with a damning report on the whole episode. He was about to blow the whistle when, on Dec. 9, he disappeared. On Dec. 10, Yin’s body was found floating in the sea off Su-ao Port, a naval base on Taiwan’s northeast coast. There was a hurried inquiry by the navy, which decided Yin had committed suicide. But the captain’s wife demanded another autopsy. This found Yin had been tortured before he died, and he had been killed by crushing blows to his head.That was when the story entered the public domain, where it has seethed and frothed ever since.

But it begins several years before Yin’s murder. In the late 1980s Taiwan’s military strategists were devising a defence plan against invasion by China, which claims to own the island of 23 million people. Part of that plan was a coastal defence system relying on frigates equipped with the latest anti-ship and anti-aircraft weaponry. The cheapest and in some ways the most appropriate ships on the market were frigates built by South Korea, and the Taiwanese Navy began negotiations with Seoul. But then, suddenly in 1991 the South Korean deal was dropped and Taiwan’s chief of the defence staff, Hau Pei-tsun, told then President Lee Tung-hui that he and the Navy wanted the much more expensive French Lafayette warships.

What had happened in the interim was that the French state-owned arms company, Thomson-CSF, since privatized and renamed Thales SA, decided to make a late bid for the Taiwan contract. Together with another French state-owned arms manufacturer, DCN, a lobby campaign was mounted for support from the government of President Francois Mitterand. Unemployment was high in France at the time and the government was open to persuasion. Indeed, in short order Mitterand authorized the spending of $500 million in bribes and inducements to ensure that the French companies got the contract. But there was a political problem: China.

Paris, and especially the Mitterand administration, has always prided itself on having a special relationship with the Chinese Communist Party regime in Beijing. But because it claims to own Taiwan and maintains the threat to invade, Beijing always objects loudly and sometimes retaliates with sanctions when countries sell arms to Taiwan. Mitterand and his prime minister, Edith Cresson, were worried the frigate sale to Taiwan would do serious damage to the Paris-Beijing relationship. Cresson’s first tactic was to instruct the foreign minister, Roland Dumas, to give Beijing details of the deal and keep China informed of the progress. But Dumas remained adamantly opposed to the Taiwan deal.

For Thomson-CSF and DCN, the foreign minister emerged as the major impediment to the deal in the French government. However, the companies found they had at hand the lever they needed to shift Dumas’ position. His mistress was Christine Deviers-Joncour, who was employed as a high-paid lobbyist for Elf-Acquitaine, the French state-owned oil company, which often played significant roles in French foreign policy and whose cash flows were sometimes used to lubricate arms deals. Deviers-Joncour told Paris magistrates in 1997, during a judicial investigation of the whole deal, that she was paid several million dollars to persuade her lover, Dumas, to drop his objections. Deviers-Joncour is almost Central Casting’s version of the French mistress. She’s very attractive, highly intelligent, of a certain age, but with a natural sense of chic, and a lively and entertaining personality. She described her part in the story and her successful lobbying of her lover in her book “Whore of the Republic.”

But it seems to have been more than her boudoir charms than caused Dumas to change his mind and support the frigate deal. At some point the Chinese Communist Party let it be known that its objections to arms sales to Taiwan are ideological and rooted in patriotism only up to a point. For the right amount of money the Communist Party leaders were prepared to forget their traditional positions that selling arms to Taiwan is an insult to the Chinese nation and a gross intrusion into the domestic affairs of China. According to Dumas, the price of overcoming Beijing’s sense of outraged patriotism was $100 million paid to “the central leadership of the Chinese Communist Party.” Taiwan’s then ruling party, the Koumintang (KMT), did rather better. French investigators believe $400 million was paid to the KMT secretary-general, James Soong, to be distributed to all those whose palms needed to be greased to get the Lafayette deal through. Soong vehemently denies that he was the bagman who distributed the French bribes and there’s no paper trail leading to him.  With the deal done, the original plan was for the frigates to be assembled in Taiwan by the China Ship Building Corp. However, in March, 1993, it was decided that all six frigates would be assembled in France.

This is where Capt. Yin enters the story. In May, 1993, Yin took up his post as head of the navy’s newly formed Arms Acquisition Office. The office had been set up to try to eradicate endemic corruption in Taiwan’s arms purchasing agencies, an almost inevitable result of the sanctions imposed by China. Yin, who was in line for promotion to rear admiral in 1994, took his responsibilities seriously and in September, 1993, he and his Number Two in the Acquisition Office, Capt. Kuo Li-heng, went to France to see how the Lafayette project was progressing. Yin didn’t like what he found.

It is not known exactly what troubled him about the deal because that information died with him. But from things he said in his last weeks of life, it seems he was appalled at the bribes paid by the French, he thought the whole project was grossly overpriced, and he had doubts about the quality and usefulness of the frigates.

It appears that someone in Taiwan’s shady arms trading business got wind of Yin’s misgivings and concluded the captain was going to be a problem. Soon after his return from France an anonymous letter was sent to the president’s office accusing Yin and his colleague Kuo of taking bribes from an arms dealer involved in Taiwan’s agreement earlier in 1993 to purchase a survey ship from Italy. Yin resolved to fight the allegations against him and on the evening of Dec. 8 he and Kuo had a meeting with three people involved in high-profile ship deals. One represented the Italian deal. Another was the agent for the German arms company that had supplied Taiwan with four minesweepers in 1991. The third was Andrew Wang, the Taiwan agent for Thomson–CSL on the Lafayette frigate deal. Yin took the precaution of secretly recording the conversation that evening on two cassettes. Unfortunately, the tapes were destroyed. They were recovered by Navy investigators after Yin’s death and were examined by, among others, Rear Admiral Li Kun-tsai, the director of Navy General Headquarters’ weapons procurement office, and Rear Admiral Liu Chin-an, director of the Ministry of Defence’s Judge Advocates Bureau. Somehow during the examination of Yin’s tapes a magnet was used to wipe the tapes clean.

On the morning of Dec. 9, 1993, the day after his meeting with the three arms brokers, Yin had a meeting with Tu Cheng Chun-chu, the Taiwan agent for the German arms company providing parts for the four minesweepers. Tu, a Taiwan-born woman with German citizenship, apparently came to Taiwan to try to persuade the Navy to expand the minesweeper contract. And that was the last that was seen of Yin until his body was found in the sea the next day. Withing a few days both Wang and Tu fled Taiwan, Wang to Europe and Tu to Singapore, where she was later interviewed by investigators and denied any knowledge of how Yin died. On Dec. 16, a week after Yin’s murder, his colleague Capt. Kuo Li-heng was arrested on suspicion of the killing and of taking bribes. In April last year Taiwan’s Supreme Court sentenced Kuo to 15 years in prison for taking $17 million in kickbacks over the Lafayette deal.

Taiwanese officials have hunted high and low for Wang, who fled with his family to Europe and is believed to have obtained British residency a few years ago. In hunting for Wang, the Taiwanese investigators have been hampered by the island nation’s ambiguous legal status. Many countries, bowing to pressure from Beijing, have only unofficial diplomatic relations with Taiwan. That means that Taiwan has few extradition treaties and it is easy for Taiwanese fugitives to find safe refuges.

Taiwan, however, has had better luck in finding Wang’s money than Wang himself, largely as a result of the investigation by the French authorities. About $700 million associated with Taiwanese arms deals has been found in Swiss bank accounts, including about $300 million in Wang’s 46 accounts. The Swiss froze these accounts at the request of the Swiss authorities and they remain frozen. Meanwhile in 2010 the Paris-based International Court of Arbitration ordered Thales SA, as the successor company to Thomson-CSF, to pay the Taiwan government $860 million in compensation for the bribes and kickbacks involved in the frigate deal. Because the French government guaranteed the deal, it is liable for over 70 per cent of the penalty.

In the dozen years since Yin was murdered, eight other people have died under mysterious or unexplained circumstances. They include a Taiwanese bank official who acted for the naval dockyards; a French intelligence agent, Thierry Imbot, assigned to watch the frigate deal for the French secret service, who fell to his death from his Paris apartment; a former Taiwan-based Thomson-CSF employee Jacques Morrison and Yin’s nephew who was a student at McGill in Montreal. In Taiwan, 28 people, including 15 arms dealers and 13 military officers, have been given prison sentences for various offences surrounding the Lafayette deal. But so far no one has been convicted of Yin’s murder.