The real weapon of mass destruction

Somewhere in the corner of one of the drawers in my desk is a bag containing bullets and cartridge cases I picked up on various battlefields in Africa.

For some I have special affection because they were fired at me and missed. But most are just the litter from civil wars and insurrections in the 1980s and ‘90s when I was an Africa correspondent.

There are cartridge cases from Mozambique, Angola, Ethiopia, Sudan, Somalia, the Congo, Namibia and South Africa. There is also a fine tear gas canister from a bad morning in the central square of Harare, the capital of Zimbabwe where we lived. Police decided to clear protesters from the square and didn’t bother with any niceties, such as issuing a warning, before opening fire.

But, as can be easily guessed, most of the cartridge cases are the distinctive short, stubby ammunition for the world’s favourite killing machine, the AK-47 assault rifle. 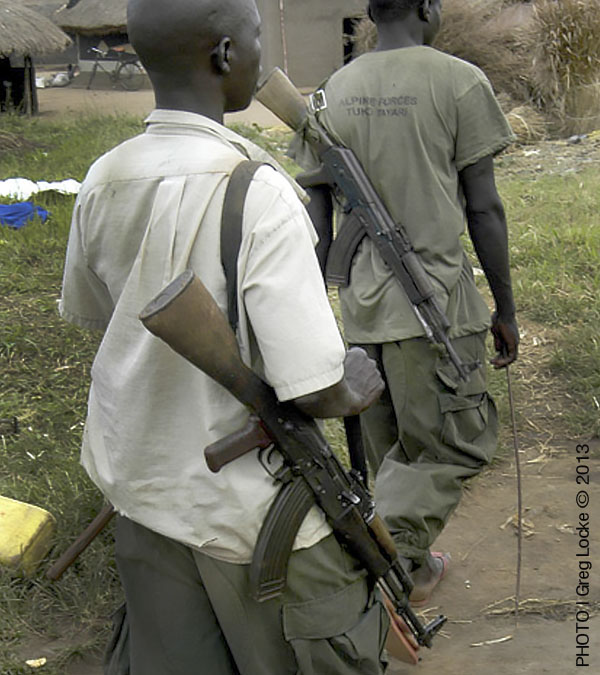 Ugandan soldiers near the village of Awere. © 2004 Greg Locke

I collected them for a purpose. A friend of mine was a military attache at one of the Western embassies in Zimbabwe, but his freedom of movement was very limited. This made it difficult for him to fulfill one of his tasks, which was to try to track the arms trade in Africa. But from the cartridge cases I brought home, he was able to tell when and where they were manufactured, and to build up a picture of the arms supply routes.

The Russian inventor of the AK-47, Mikhail Kalashnikov, died last month aged 94, and this week the newspaper Izvestia published a copy of a letter in which he said he felt guilt-ridden for the millions of deaths the gun has caused.

The letter was written to the head of the Russian Orthodox Church, and is in stark contrast to what Kalashnikov always said during his life time. He always shrugged off personal responsibility for the weapon, which became the official infantry rifle of the Red Army in 1947.

It is politics and politicians who are responsible for the people killed by his invention, Kalashnikov always said.

The World Bank reckons that about 100 million AK-47s are in circulation and they have been manufactured under licence in 30 countries. There are also countless crude counterfeits in the market, where even genuine AK-47s can usually be bought for about $100.

As well as being the official infantry weapon for 60 armies around the world, the AK-47 is favoured by terrorists, insurgents and drug traffickers, from Mexico to the Philippines and everywhere in between.

For Osama bin Laden, fondling an AK-47 was an essential fashion statement in his propaganda videos, and when South African President Jacob Zuma sings his old anti-apartheid war song, “Bring Me My Machinegun,” everyone knows which gun that is.

What has made Kalashnikov’s invention ubiquitous on the world’s battlefields is its simplicity and reliability. It is cheap to manufacture, has only nine moving parts and always works, even when clogged with sand, earth or dust.

The gun makes a distinctive crack when fired, quite unlike any other rifle. Once you’ve heard an AK-47 fired, you never forget that sound, especially if it was aimed at you.

The AK-47 is not a pretty rifle. The breech, barrel and firing mechanism, which allows automatic fire of 600 bullets a minute, is brutally functional in design.

And no effort at elegance was made in the design of the wooden stock and grips. In some copies, plastic is used instead of wood, which produces an even more evil looking killing machine.

The gun’s role in most of the liberation wars of the last 60 years has given it heroic status in many eyes. An outline of the AK-47 is featured on the flag of Mozambique, acknowledgement of the part played by Kalashnikov’s invention in the war against Portuguese colonial rule and the 20-year civil war after the Portuguese left in 1975.

Drawings of the gun also figure on the coats of arms of East Timor and Zimbabwe.

Iran’s Islamic Revolutionary Guards use an outline of the AK-47 as their logo, as do the Lebanese terrorist group, Hezbollah, which is supplied and trained by the Iranians.

Mikhail Kalashnikov was a sergeant tank commander in 1941 when he was wounded in the Battle of Bryansk. As he recuperated in hospital Kalashnikov fretted over what he believed was a major problem: that the Soviet infantry, with their bolt action rifles, were out-gunned by their Nazi opponents, many armed with the first assault rifle, the Sturmgewehr 44.

Kalashnikov set about trying to design his own version of the assault rifle, which would be relatively short and light, and capable of both automatic and single-shot fire.

Great accuracy, a feature of the standard infantry rifle, was not so important.

Most infantry actions during the Second World War and since occur at less than 400 meters. The AK-47 is reasonably accurate up to that range, after which the bullet starts tumbling.

Kalashnikov unashamedly put elements of the German Sturmgewehr 44 in his design, but he was also influenced by the American semi-automatic M1 Garand rifle and the Remington Model 8 rifle.

Kalashnikov’s baby was put through stringent reliability tests, including all the environments the Soviet Union could offer, from Arctic ice to desert sand storms, before it was adopted as the standard infantry weapon.

The American military first came across the AK-47 in the hands of the Viet Cong in Vietnam and quickly realised it was far superior to their unreliable M-16s.

Many Americans armed themselves with AK-47s when they could and, quietly, so do some American special forces units today.