South African voters have delivered the most stinging rebuke to the party of Nelson Mandela since it led the country out of apartheid a quarter century ago.

The messianic reputation of the African National Congress (ANC) as the party that for decades battled institutionalised racial segregation and then led the country to democracy in the early 1990s is crumbling under the weight of administrative incompetence and endless corruption scandals. 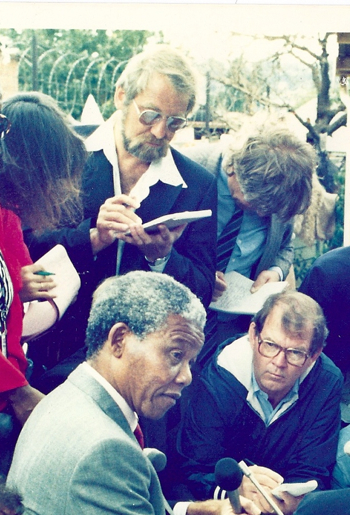 Nelson Mandela speaks to reporters, including Jonathan Manthorpe (top), in the garden of his old house in Soweto two days after his release from Victor Verster prison on Feb. 11, 1990.

The extent of the slide was evident in municipal elections this week when the ANC lost control of the country’s administrative capital, Pretoria, and the south coast industrial city of Port Elizabeth to the main opposition Democratic Alliance (DA). With about 98 per cent of the votes counted the parties both had 42 per cent support in the country’s economic heartland and most populous city, Johannesburg. In Cape Town the DA’s share of the vote rose to 67 per cent from the 61 per cent it won in 2011.

Nationwide, support for the ANC slipped to 54 per cent from 62 per cent in the last municipal elections.

The rise of the DA under its new, first black leader, 34-year-old evangelical pastor Mmusi Maimane, is dramatic and is a warning to the ANC for the upcoming national elections in 2019. South African President and ANC leader Jacob Zuma is deeply unpopular after a spate of corruption scandals and economic mismanagement that has seen unemployment stuck at around 25 per cent.

Zuma unnerved investors in December when he changed finance ministers twice in one week. The value of the currency, the rand, dropped like a stone. The President has survived several other scandals that would have toppled less determined – or thick-skinned – politicians. In 2005, while a minister in the ANC government with responsibility for confronting the HIV-AIDs epidemic, Zuma was charged with rape. The judge eventually decided the sex was consensual. But Zuma’s confession in court that he did not use a condom even though he knew his partner was HIV positive brought public scorn and derision.

Zuma went on to win the ANC leadership and the Presidency. However, he was then charged with abuse of power for using the equivalent of about $20 million in public money to renovate and expand his family home and compound in KwaZulu-Natal. He survived an impeachment vote in April after ignoring a Constitutional Court order to repay some of the money. He now says he will give some of the money back.

Zuma cannot run again after his second term is up, but his leadership of the ANC must be reviewed next year, and it is possible the party will replace him with a more appealing figure in an effort to stall the evident momentum of Maimane and the DA.

That will not be easy. This week’s municipal elections show a growing divide between the towns and cities, where the DA is on the march, and the rural areas where the ANC still commands voter loyalty.

The temptation for ANC strategists will be to shore up their support in rural areas with patronage outlays and exploiting the authority of local chieftains and community leaders. This may arrest or slow the party’s slide, but it will reinforce the ANC’s image as the party of hidebound yesterday’s men clinging to office.

Of the country’s 54 million people, 60 per cent are under 30 years old and have no direct memory of apartheid or the struggle that went into its defeat. What young South Africans know of the ANC is a party that has fallen far short of its promises to provide housing, jobs and social services. Meanwhile the ANC leaders live the lives of princes and their relatives and cronies have benefited from “black empowerment” policies.

One of the encouraging results in this week’s municipal votes is the failure of the radical Economic Freedom Fighters (EFF), led by ANC renegade and anti-white racist Julius Malema. The EFF had never contested municipal elections before, and despite its high profile nationwide, it won only single-digit support in most of the contests. This suggests that Malema, who has been found guilty of “hate speech” for his incitement of his followers to kill whites, is more of a media darling than a serious political player. However, in towns and cities where neither the ANC nor the DA has a majority, Malema and the EFF may find themselves kingmakers with a valuable commodity to barter away.

The poor showing of the EFF gives added shine to the success of Maimane and the DA.

The DA has its roots in opposition to apartheid by liberal whites in the 1950s, when they founded the Progressive Party. It was the party of white anti-segregation activists such as Helen Suzman, Frederik van Syl Slabbert and Harry Swartz. In 1989 the name was changed to the Democratic Party, and in 2000 changed again to the Democratic Alliance when it merged with two smaller parties.

The DA and its forerunners have always been successful in South Africa’s Western, Northern and Southern Cape regions, where “coloured” people predominate and there is a relatively small population of black Africans, who are the backbone of ANC support.

The DA won control of Western Cape, one of South Africa’s nine provinces, in the 2009 general election and increased its majority in 2014.

Much of the successful growth of the DA is credited to Helen Zille, who served as both national party leader and Premier of Western Cape until she resigned the national leadership in April – two years earlier than expected — and was replaced by Maimane.

Maimane’s leadership has already done much to scotch the prejudice that the DA is the party of liberal whites. In the past, the DA got only about six per cent of its support from black voters. He has the added advantage of coming from the industrial heartland around Johannesburg, the old Transvaal province now known as Gauteng. It is here and in neighbouring KwaZulu-Natal that the DC must break through if it is to become a credible alternative government to the ANC on the national stage.

Maimane ran for mayor of Johannesburg in 2009 and for premier of Gauteng in 2014. He was defeated in both contests, but gained a national profile and joined the DA parliamentary caucus last year.

Despite its legitimate claim to being the founding political organisation of modern South Africa, the ANC is clearly vulnerable. As well as its failure to deliver the promised betterment in people’s daily lives and the stench of corruption that hangs around its leaders, the party has fallen out with some of the country’s very important trade unions. The ANC’s alliance with the unions was an essential part of the organised opposition to the National Party apartheid regime. The crumbling of that alliance is a sign of the changing political landscape since the first non-racial, democratic elections in 1994.

Widening voter support for the DA comes from the party’s ability to point to its largely corruption-free and successful administration of the Western Cape, Cape Town, and most of the smaller urban centres within the province. But the party is likely to go through some wrenching policy contortions if it is to mount a credible alternative to the ANC government.

At the DA’s May convention that elected Maimane leader, it also adopted a “Values Charter,” that is intended to be a national election manifesto. This document is full of fine platitudes and is strong on family values, which appears to reflect Maimane’s position as an evangelical Christian. But it is at odds with traditional, non-denominational DA liberal values, and it may therefore be difficult for Maimane to carry the party’s veterans with him.