Scotland’s First Minister and Nationalist Party leader Alex Salmond is generally reckoned to be the canniest politician in the British Isles.

So it was entirely in keeping that he chose today, the day when the English patron saint St. George is celebrated, to cross the border to the northern English city of Carlisle to promote Scottish separation.

Salmond’s aim, with the campaign for Scottish independence heating up ahead of the September 18 referendum, was to calm anxieties. Little will change when Scotland becomes independent, Salmond underlined as polls show pro-separation supporters significantly narrowing the gap on the “no” vote’s slim majority.

People will still be able to live in England and work in Scotland, or visa versa, he said. “Friends and family would continue to visit each other. We would still watch many of the same television programs.”

It is in Salmond’s interests to minimize the implications of Scottish independence, which might come in 2016 if there is a majority for separation in the September referendum. But the potential fall-out not only for the United Kingdom, but also for Europe and the European Union, is profound.

As Canadians are well aware from debates and campaigns over Quebec independence, the division of assets and liabilities in the break-up of a country is complex and vexatious. In the case of Scotland, these matters are particularly difficult because much of Britain’s North Sea oil reserves are in Scottish waters, while Scots receive much more in social support from the British treasury than they give in taxation.

Salmond and the Scottish independentists have blithely put it about that Scotland will continue using the British currency, the pound sterling. Not so fast, says Britain’s finance minister George Osborne, echoed quietly by the new Canadian Governor of the Bank of England Mark Carney. While a currency union might be possible, they say, it would mean Scotland relinquishing control over its fiscal policy because such things as interest rates and money supply would be decided by England alone.

There’s always the European Union currency, the euro, of course. And again, while Salmond and his followers foresee a seamless entry into the EU by an independent Scotland, European Commission President Jose Manuel Barroso doesn’t share this view. Scotland, Barroso says, would not just get a transferred membership in its new status, it would have to re-apply for membership and get the unanimous support of all 28 EU members.

Then there’s the North Atlantic Treaty Organization. Salmond foresees no problems with Scotland continuing as a NATO member, but British military leaders – English in this context – don’t see it that way at all.

One of Salmond’s promises is that an independent Scotland will expel the Royal Navy and its submarines armed with Trident nuclear missiles from their base at Faslane west of Glasgow. Four former British military chiefs as well as the current First Sea Lord, Admiral Sir George Zambellas, have said publicly such a move would not only weaken the security of both countries, but also jeopardize Scotland’s membership in both NATO and the EU. 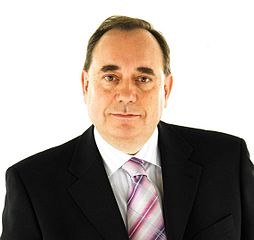 The prospect of Scottish separation is a difficult question for both Britain’s main political parties. For the opposition New Labour, it is highly personal. Of the 59 members of the Westminster parliament from Scotland, 41 are from New Labour. But while the party is opposed to Scottish independence, its support for a “no” has been less than enthusiastic.

On Tuesday, former British Prime Minister Gordon Brown, who is much more popular in his native Scotland than south of the border, entered the fray, but with a boring and tedious catalogue of threats to Scottish pensions and social service funding involved in separation. Perhaps he was playing to the supposed Scottish traits of parsimony and fiscal prudence.

If New Labour shows signs of being torn in its response to the upcoming referendum, the ruling Conservatives of Prime Minister David Cameron are even more so.

If the last election had been fought without the Labour stronghold of Scotland, the Conservatives would now have a majority government, instead of having to nurse an often-troublesome alliance with the Social Democrats. Indeed, without Labour’s Scottish electoral fiefdom, England’s Tories would find it much easier to regularly form majority governments.

There are other considerations, however. Cameron and the Tory leadership support Britain’s continued membership of the EU. But in the face of growing opposition in Britain and their own party, they have been forced to try to renegotiate the sovereign powers delegated to the EU in Brussels and to promise the British people a subsequent “in or out” referendum in 2017 after the next election.

Without the Scots, who tend to be pro-EU, the remnants of the United Kingdom – England, Wales and Northern Ireland – are, polls suggest, likely to vote to leave the EU.

There are other possible knock-on effects of Scottish separation in Europe itself. The Spanish region Catalonia, which already enjoys significant autonomy, is riding on Scotland’s coattails and plans a non-binding referendum on independence in November.

The Spanish government in Madrid is moving to block the referendum in parliament and the Constitutional Court. If that happens, says Catalan leader Aturo Mas, he will bring forward regional elections and make independence the issue.

And in Belgium, the separatist New Flemish Alliance, which is likely to win regional elections in the Dutch-speaking north of the country this year, will also take its cue from what happens in Scotland.

The latest polls in Scotland, with the undecided vote discounted, shows 52 percent of respondents support staying with the United Kingdom while 48 per cent want independence. That’s almost within the margin of error.