Refugees are now the biggest crisis facing the European Union 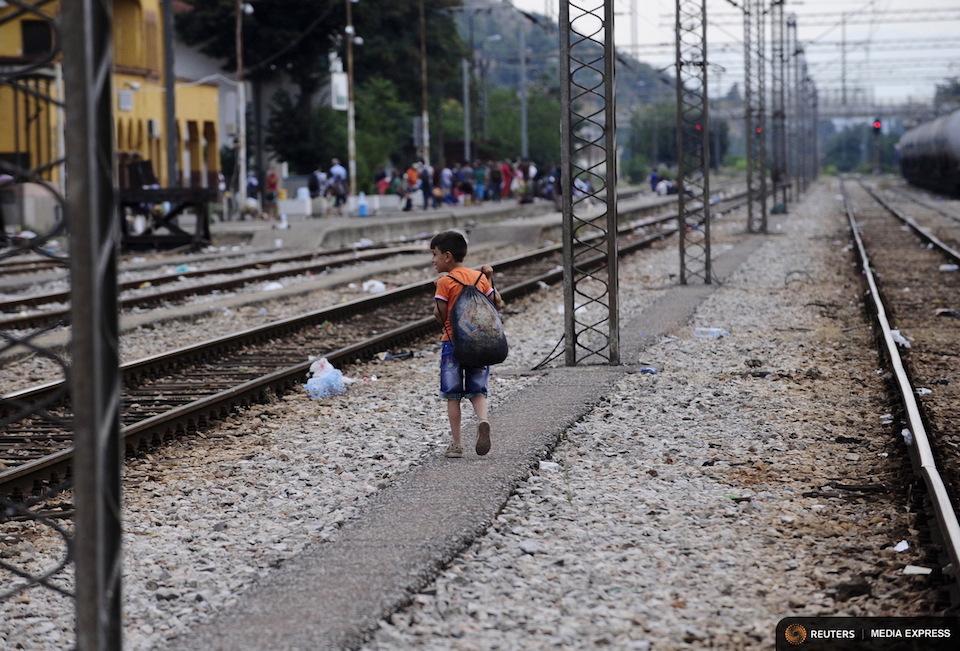 If you are already a supporter of F&O, thank you. If you value our work and wish for us to continue, please visit our Subscribe page to chip in at least .27 for one story or $1 for a day site pass. Please tell others about us. A boy walks through Gevgelija train station near the Greek border with Macedonia July 30, 2015. Tens of thousands of migrants, mainly from the Middle East and Africa, use the Balkans route to get into the European Union, passing from Greece to Macedonia and Serbia and then to western Europe. After walking across the border into Macedonia to the small local station of Gevgelia, migrants pile onto an overcrowded four-carriage train in sweltering heat, young infants among them, to travel about 200 km north. Their aim: to enter Serbia on foot, another step in their uncertain search for a better life. REUTERS/Ognen Teofilovski

Among the many compelling pictures in recent weeks of would-be refugees swarming across the Mediterranean one from the Greek island of Lesbos caught my attention in particular.

It was a short video of an infuriated Greek woman confronting a milling throng of young and apparently fit and healthy Syrian men who had recently made the short passage to her island from Turkey in hope of sanctuary in Europe.

I could see her point. But the young men took not notice of the outraged woman as they scrambled and fought among themselves to get the travel papers that would allow them to get to their imagined promised lands in northern Europe.

The tidal wave of illegal migrants fleeing wars in the Middle East and dead end lives in Africa is now the most pressing problem confronting the 28 members of the European Union (EU). It is a far more immediate and politically charged issue than the economic crisis of the common currency, the euro. There is no agreement on what to do or how to do it, though German Chancellor Angela Merkel plans over the coming months to press for a new, integrated asylum policy. A major aim will be to spread more evenly the “burden-sharing” of resettling the migrants, most of whom head for the vibrant economies of northern Europe, especially Germany, Britain and Sweden.

Germany in particular is seen by the migrants as the place where the streets are paved with gold. Interior Minister Thomas de Maiziere this week forecast that Germany alone would receive 800,000 asylum applications this year, nearly double the previous high in 1992 when the country was the destination of choice for people fleeing the civil war in the former Yugoslavia. Last year there were over 626,000 asylum applications in the whole of the EU.

De Maiziere’s prediction is more pessimistic than that of the United Nations, whose refugee agency says about 264,500 migrants have crossed the Mediterranean so far this year.

The EU is torn both in how it should confront the fleets of overcrowded and unseaworthy boats attempting to make the passage from North Africa and the Middle East – conservative estimates are that at least 2,300 people have died attempting the crossing – and what to do with those who do make it to Europe’s shores.

Rules and regulations at the moment are based on the Dublin Convention, named for the city where agreement was reached in 2009, but which has been amended several times since. The basic approach is that asylum seekers should be registered and fingerprinted in the country where they land. Officials from that country then oversee the transfer of the migrant to his or her eventual destination. The idea is that creating one file for each refugee makes it more difficult for them to manipulate the system or to disappear.

But the flood of would-be refugees has overwhelmed officialdom in the frontline countries where most land. Last year, for example, over 170,000 asylum seekers arrived by boat in Italy. But the Italian authorities registered only 65,000 new asylum applications, claiming that the Dublin rules gives it an unfair share of responsibility. What happened to the over 100,000 people the Italians didn’t register is anyone’s guess.

The contrast between Sweden’s open door and the response this week from Slovakia to suggestions it take more migrants illustrates the conflicting political emotions in the EU. Slovakian Interior Ministry spokesman Ivan Metik said his country will take more migrants, but only Christians. Muslims, he said, would find it difficult to integrate into predominantly Christian Slovakia. Most of the North African and Middle Eastern refugees besieging Europe are Muslims, but Slovakia says it plans to restrict its intake to 200 Syrian Christians.

What is strange in this climate of internal discord in the EU and the threat that they may be overwhelmed by the tide of migrants, is that Europe is putting too little effort into seriously addressing the reasons for the deluge. The United States-led military campaign against the barbarous Islamic State (IS) fanatics in Syria is all well and good. But it does nothing to confront the power vacuum created by the civil war to oust President Bashar al-Assad that has allowed IS to flourish.

Over four million of Syria’s 23 million people have fled to neighbouring countries in the four years since the civil war started, according to the United Nations, and countless hundreds of thousands more are displaced within Syria. The Syrian war has become a proxy conflict for regional influence between Iran, Saudi Arabia and Turkey. It has already spread into Iraq and now threatens to spin off another war between the Turkish government and the Kurds. This conflict needs to be brought to a close and a political process begun before it spreads even more widely.

Equally, to the south Europe is now reaping the results of the decision by the North Atlantic Treaty Organization in 2011 to aid rebels in Libya to oust dictator Muammar Gaddafi by giving them air cover – a campaign in which Canada, to its shame, took part. No thought was given to who or what would replace Gaddafi. The inevitable outcome is that Libya has become a failed state of warring tribal and religious factions. The chaos is the perfect haven for the smuggling gangs who are relieving people from the North, West and Horn of Africa of their life savings as the price of taking them to Europe. UN officials are trying manfully to find a political solution to the Libyan debacle, but the country is likely to remain a highway for trafficking migrants for many months or years to come.

At a meeting of the European Council in April the leaders agreed on a list of four priorities for addressing the migrant crisis. One is to reinforce the Dublin Convention by giving more resources to the frontline states where the asylum seekers land. The second is to increase funding for the EU’s maritime missions aimed at rescuing migrants who come to grief in the Mediterranean.

Germany and Italy are also talking about adopting the Australian system of detaining all sea-borne migrants before they reach shore. They would then be taken to camps in foreign countries where their asylum applications are processed. Those found not to merit asylum would be sent home. There is, however, much squeamishness in the EU about the Australian system, which some countries see as grossly unsympathetic to the plight of migrants.

Only the third and fourth of the EU’s priorities look over the horizon at why and how the migrants are assaulting Europe. One priority of these priorities is to fight people traffickers, especially those involved directly in smuggling migrants. The other is to increase co-operation with the African countries from where the migrants are coming or through which they travel.

These are weak and ineffectual responses to the problem. They fail totally to address the root causes of why people are flooding out of Africa or, for that matter, the refugee camps in countries neighbouring Syria and Iraq.

And stopping the exodus from Africa and the Middle East is not just a matter of easing pressure on European societies. It is also a matter of securing the future of the migrants’ homelands. Inevitably, it is the most inventive, educated and wealthy Africans and people from the Middle East who are taking the risks and have the resources to try to move to Europe. The migrant flood is robbing the Middle East and Africa of many of its most skilled people and thus making more difficult the eventual social, economic and political development of their home countries. A World Bank study of African migration patterns published in 2011 found this problem is particularly acute in the former French colonies of West and North Africa. Nearly nine million people, for example, have emigrated from the Maghreb countries of North Africa – Libya, Tunisia, Algeria, Morocco, and Mauritania. Ninety-three per cent of them have gone to Europe.

Rather than immersing itself in self-indulgent angst about how to treat the flood of asylum seekers, surely Europe would do better to focus its efforts on encouraging and enabling the would-be migrants to contribute to their own societies.

If what is driving them to Europe is the conflict, corruption, unaccountable political leadership and lack of opportunity in their own countries then, surely, one legitimate option is, as the Greek woman said, to help them to “Go home and fight.”

If you are already a supporter of F&O, thank you. If you value our work and wish for us to continue, please visit our Subscribe page to chip in at least .27 for one story or $1 for a day site pass. Please tell others about us.

In the past month, an estimated 30,000 refugees have passed through Macedonia, another step in their uncertain search for a better life in western Europe. They all travel in harsh conditions and face many challenges en route. In this photo-essay,  Ogden Reofilovski of Reuters documents migrants passing through the small railway station of Gevgelia, a stone’s throw from the border with Greece: 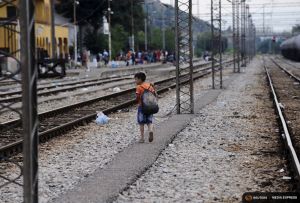 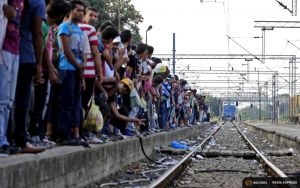 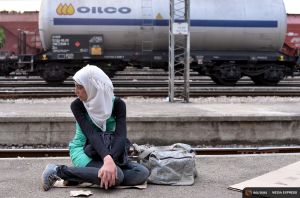 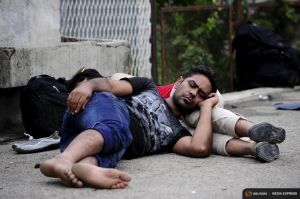 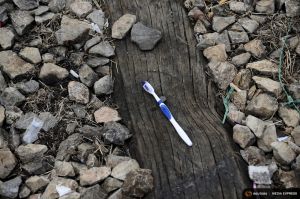 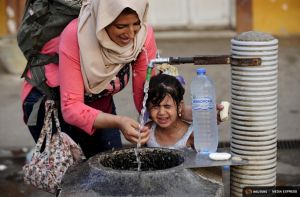 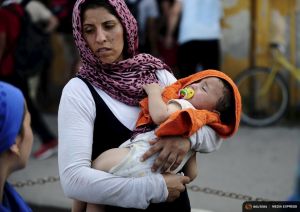 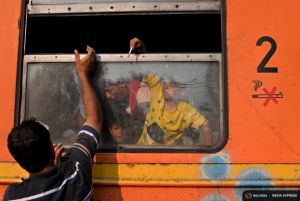 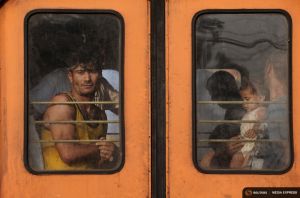 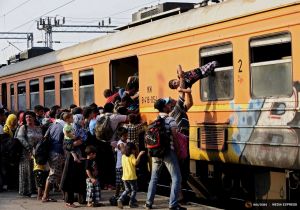 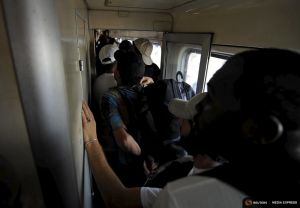 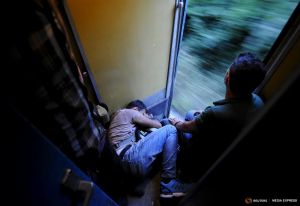 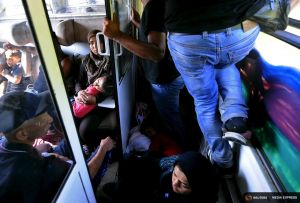 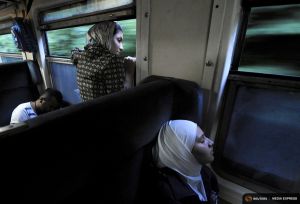 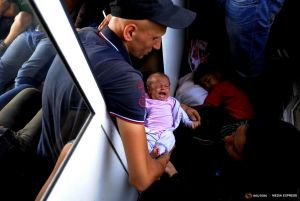 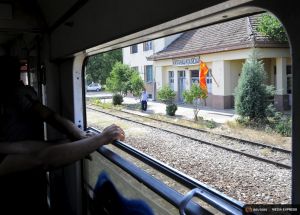 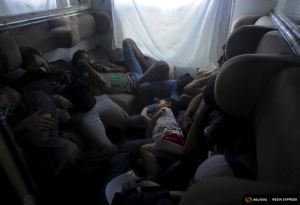 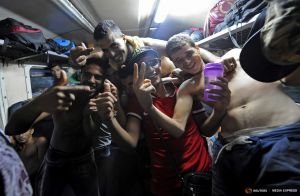 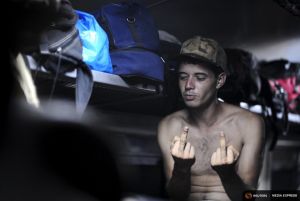 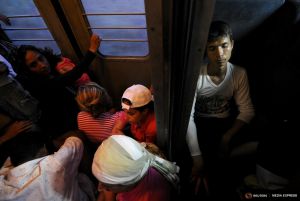 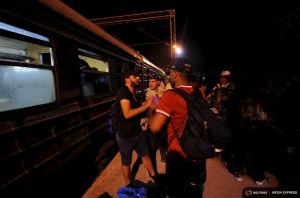 Thank you for your patronage. Please help sustain us by telling others about us. To receive F&O’s free blog emails fill in the form on the FRONTLINES page. Facts and Opinions is a boutique journal, of reporting and analysis in words and images, without borders. Independent, non-partisan and employee-owned, F&O is funded by you, our readers. We do not carry advertising or “branded content,” or solicit donations from foundations or causes.