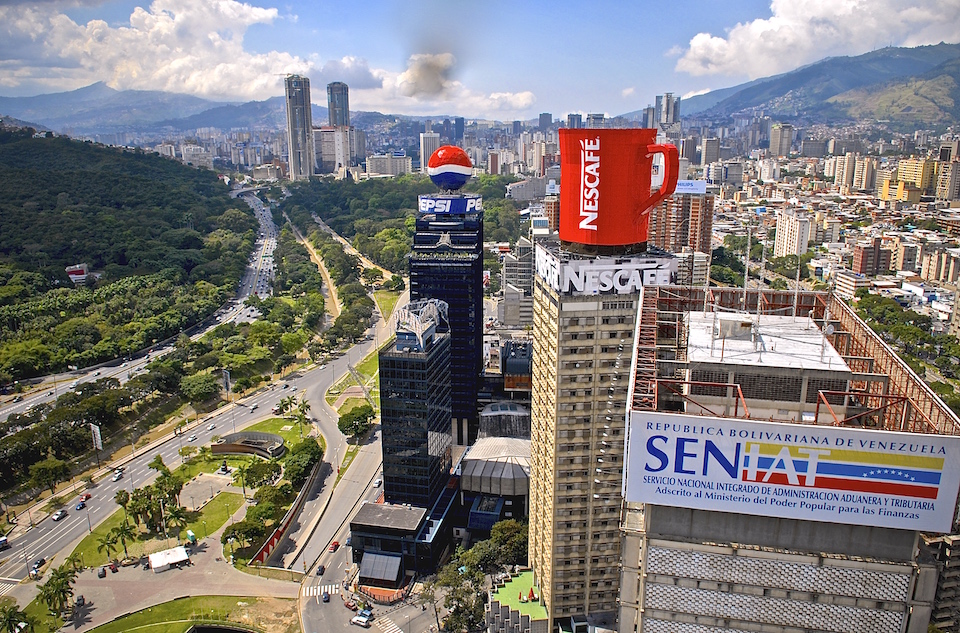 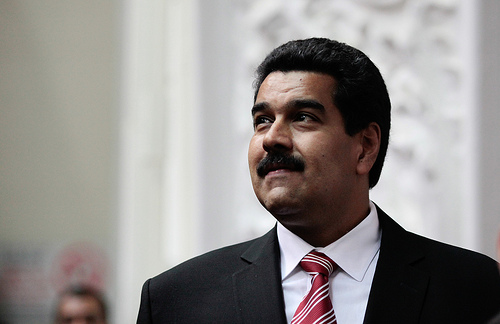 Nicolás Maduro in 2013, at a memorial for Hugo Chavez. Prensa/Miraflores/Flickr/Creative Commons

It’s just a matter of who gets their boot lined up first to kick him out the door. The opposition, which since December has controlled 75 per cent of the seats in the National Congress, is working on a recall referendum.

Powerbrokers in Maduro’s United Socialist Party of Venezuela (PSUV) strongly suspect him of betraying the purity of Chavez’ fabulist, operatic “Bolivarian Revolution,” and are lurking behind the drapery with knives drawn.

And then there’s the military, which in Venezeula can always be depended on to launch a coup if the civilians bungle things.

The fate of Maduro, who as Vice-President easily moved up a notch after the death of Chavez in March 2013, is of minor importance in the grand scheme of things. Far more pressing for Venezuela’s 31 million people is that Maduro, and Chavez before him, have brought the country to the brink of economic and social collapse. It may yet tip over the edge into chaos.

Basic foodstuffs such as sugar, rice, pasta, milk, cornmeal and flour are often unobtainable, and when stores do have supplies, people have to line up for hours for the chance to buy. It’s the same situation for basic medicines and for the same reason.

Venezuela depends on imports for most of the basics of life, and the bottom has dropped out of the value of the currency, the bolivar.

Maduro has tried to open the door by setting an official rate for necessary imports at 10 bolivars to the United States dollar. For non-essentials the rate is 200 bolivars to the greenback. But in Marxist and mismanaged countries like Venezuela, the blackmarket is always the best measure of the real strength of the currency. The blackmarket rate in Venezuela is over 1,000 bolivars to the US dollar. By this count, Maduro’s much ballyhooed increase on March 1 of the minimum wage to 11,578 bolivars a month is worth less than $US12. That’s less than a quarter of the United Nations’ poverty level.

The immediate cause of this turmoil is the 70 per cent decline in oil prices over the last two years. Venezuela has the world’s largest proven oil reserves and is the tenth largest producer. According to the Organization of Oil Exporting Countries, oil revenues bring in 95 per cent of Venezuela’s hard currency and account for 25 per cent of gross domestic product.

Venezuela has suffered from the “Dutch disease” of excessive reliance on one product since the discovery of oil under Lake Maracaibo during the First World War. This bred both corruption and a cycle of military coups. The cancer reached the bone during the 1973 oil crisis, when wealth flooded into Venezuela in untenable quantities. The whiplash came in the 1980s and 1990s with the collapse of oil prices. There were endless violent street protests and attempted military coups. One, in 1993 was led by army major Hugo Chavez. He had for years been running within the armed forces a secret socialist movement, founded on the supposed ideals of South American revolutionary Simon Bolivar. The coup failed and Chavez was imprisoned, but was pardoned the following year, 1994. Chavez went public with his Bolivarian Revolution political movement and in 1999 won the presidential election.

In power, Chavez swiftly moved to institute a socialist dictatorship. This was widely popular among the country’s poor and indigenous peoples and he was re-elected under the new constitution in 2001. But the authoritarian changes sparked protests among the middle and business classes. Many people were killed during street protests and strikes in 2002 that tried and failed to force Chavez from office.

Chavez was re-elected in 2007 and again in January 2013, shortly before his death from cancer.

Chavez’ presidency was marked by showmanship and flamboyant gestures. He used Venezuela’s oil wealth to make himself the patron of Cuba after the collapse of the Soviet Union when Moscow stopped propping up Fidel Castro’s regime. In 2006, Chavez toured Europe and promised to provide cheap oil to the continent’s poorest communities, drawing peaens of praise and thanks from the mayor of London, Ken Livingstone. He also delivered cheap heating oil to the impoverished of Massachusetts in the winter of 2006. But mostly he hammered constantly at the theme that his administration was under threat from the U.S. government of President George W. Bush, which he claimed was conspiring with Venezuela’s business classes to remove him.

Chavez used the straw man of foreign conspiracy to introduce all kinds of financial controls and nationalizations of industrial and agricultural sectors. These applied in such a way as to try to cripple Venezuela’s business community and to reward the President’s friends, including the military. The result, of course, was to embed corruption and to create a grossly misconceived and dysfunctional economy that could only survive while being fed a daily diet of petrodollars.

It was this genetically discordant animal that Maduro inherited three years ago after Chavez’ death. He has done nothing in the years since to try to put Venezuela on a sounder footing. Indeed, all his actions since matters came to a head with the oil price slump and his PSUV party’s loss of control of the National Assembly in December, suggest he only knows how to sing out of Chavez’ hymn book.

Before the new National Assembly met, Maduro packed the Supreme Court with 13 new judges sympathetic to himself and the PSUV.

So far the court has provided Maduro with some protection against the opposition-dominated National Assembly. Leading opposition figure Henrique Capriles has launched a recall campaign, aimed at getting the three million signatures necessary to force a referendum requiring Maduro to leave office before his current term ends in 2019. The Supreme Court is contesting the timing of the recall referendum, and has also dismissed a bill that would grant amnesties to political prisoners jailed under Maduro and Chavez.

During his State of the Nation Address on January 14, Maduro announced an emergency decree, giving himself extraordinary powers for 60 days to try to address the economic crisis. The National Assembly rejected Maduro’s move, but the Supreme Court backed the president.

But even with these draconian powers, Maduro doesn’t have the will to make the fundamental reforms necessary to set Venezuela on a sustainable economic course.

His fiddling with the official exchange rates to try to encourage the importation of necessary basic foods and drugs will do nothing in the face of the more realistic blackmarket rate.

Raising the price of gasoline by 6000 per cent made a lot of headlines, but it still costs less to fill up a gas tank in Venezuela than anywhere else in the world and the government subsidies for drivers are worth about $US18 billion a year.

There has not been an increase in gasoline prices since 1989, when the rises sparked violent riots. To try to avoid a recurrence, Maduro announced increases in social spending and a rise in the minimum wage from 9,647 bolivars a month to 11,578. As the money is essentially worthless and there’s nothing to buy with it anyway, this is a totally empty gesture.

Another strategy is to produce 19.5 million tonnes of “fair priced” food. But the dependence on bureaucratic management and price controls insure failure of this scheme from the start.

The final move shows where Maduro really fears a backlash. He announced that the military will take over all aspects of the country’s energy and mining businesses, including transport, construction, imports and exports. The new Military Company for the Oil, Mining and Gas Industries has been given a 50-year lease to, in essence, run the economy.

This massive bribe may not be enough to save Maduro from the military, on whose support he has depended increasingly as his stock withers within his PSUV and the opposition manoeuvres to oust him. There is a significant faction within the armed forces that believes Maduro must go, and by a coup if necessary. After all, these officers argue, it is the military that will have to deal with the unrest that is likely to spring from the President’s economic and administrative incompetence.

However, while the most influential figures, such as Defence Minister Vladimir Padrino Lopez, want Maduro out, they want his removal to be managed in a constitutional and dignified manner. They would rather avoid a classic military coup.

The most likely outcome for Maduro is that within days or weeks he will bow to insurmountable calls for his resignation from the military and his PSUV party. That would require the swift calling of new elections, with the prospect of an opposition leader becoming President.

By any measure, that will not be a victory to be envied.