North Korea’s Kim rattles the bars of his cage 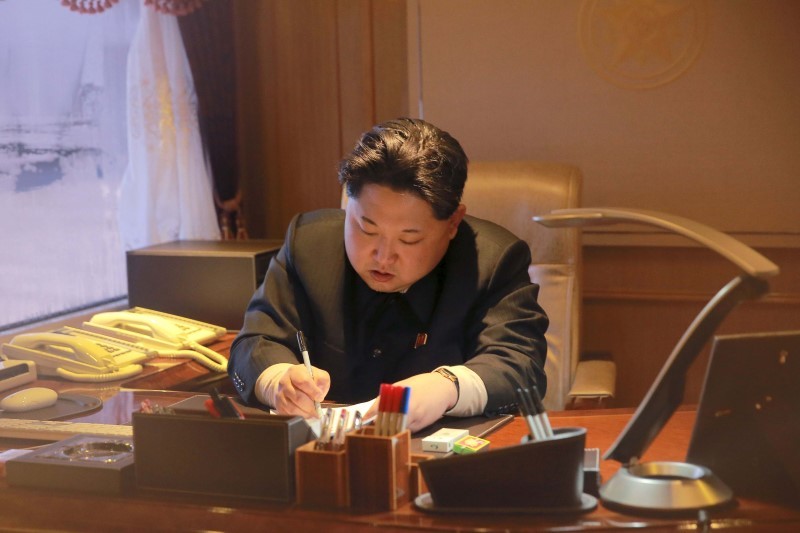 A good rule of thumb is to always be deeply suspicious of optimistic projections for the future of North Korea.

There have been some rose-tinted forecasts wafting from Pyongyang this week as the Workers’ Party of Korea holds its first congress since 1980. The congress was called to endorse the leadership of Kim Jong-un, 33, who took over after the death of his father Kim Jong-il at the end of 2011.

Since then the younger Kim has entrenched himself at the top in the time-honoured North Korean manner. He has slaughtered anyone who might challenge his authority, including his uncle and all his father’s top generals. Kim’s reputation for responding with swift and uncompromising brutality to even the most innocuous wayward behaviour among those around him is now well established.

He has also charged ahead with North Korea’s program to develop nuclear weapons and intercontinental ballistic missiles to drop them on the country’s enemies, especially the United States.

As a result of the fourth nuclear weapon test on January 6 and the sixth long-range missile test on February 6, North Korea is now isolated by some of the most stringent and wide-ranging sanctions ever imposed by United Nations members.

The sanctions were adopted unanimously by the UN Security Council on March 2. They require the mandatory inspection of all cargo in and out of North Korea. They impose a ban on North Korea importing coal, iron and iron ore, and on all major export items. No one may sell North Korea aviation fuel, which can be used to power rockets. However, at the insistence of Russia, North Korean civilian aircraft can be refuelled in foreign countries. All UN member states must close North Korean banks and freeze their assets.

One remarkable aspect of this Security Council Resolution 2270 is that China, which has a veto on the council, supported the resolution.

The Communist Party in Beijing has been the protector of the Kim regime in Pyongyang since the 1950s, buying North Korea’s resource products and selling food and oil in sufficient quantities to keep the regime and its massive army afloat. China continues to want to maintain North Korea as a buffer against Washington’s ally, South Korea. But even Beijing finds Kim Jong-un too unpredictable and irrational to be trusted. The Chinese government opposes North Korea’s nuclear weapons program both because it is an agent of regional instability and because it has given the U.S. the excuse to introduce anti-missile systems into the Far East that Beijing believes threaten its own security.

Beijing therefore not only backed the latest round of UN sanctions on North Korea, there are credible reports it has imposed further sanctions of its own, restricting the export of rice and building materials to North Korea.

With food production falling in North Korea because of drought and mismanagement, the country is now facing a chronic food shortage. Food production fell nine per cent last year over 2014, according to the UN. The UN’s Food and Agriculture Organization is predicting North Korea’s food deficit will quadruple this year. Already, says the organization, “most” households only have access to a “poor or borderline” amount of food.

The challenge for Kim Jong-un in coming months as the effects of drought and economic sanctions intensify will be to provide enough food to keep the elites and the military loyal.

The Kim regime loves catch phrases. For Kim Il-sung, the regime’s founder it was “juche,” meaning self-reliance. Well, that didn’t work because his brand of half-baked communism destroyed the economy, especially agriculture. His son, Kim Jong-il, came up with the concept of “Songun,” meaning the military would be developed first. This cack-handed notion was that giving economic favours to the military would create a trickle-down effect into the rest of the economy. The reality was that Kim Jong-il needed the loyalty of the military in order to stay in power. And we all know that trickle down economics don’t work. The cream stays at the top of the bottle.

The newest Kim, Kim Jong-un, has come up with his own catchphrase, which is being cheered to the rafters by delegates at this weekend’s congress in Pyongyang. It is “Byongjin,” meaning the simultaneous development of both nuclear weapons and the civilian economy.

The rosy interpretation of this is that it signals a shift away from the emphasis on the military and perhaps the adoption of limited market economics, as in neighbouring China.

The mere holding of the congress for the first time in 36 years and the bringing of the Workers’ Party to the fore is being interpreted in some circles as a sign that Kim is pushing the military into the background.

If that is the appearance, it will be deceptive. Kim cannot survive without the backing of the military. Cutting off the military’s preferential treatment in the allocation of food and economic benefits would be a quick way for Kim to have an unhealthy appointment with a noose and a lamppost.

Kim is now more isolated than either his father or grandfather before him. Beijing turning its back on him is highly significant, but so is what has happened in South Korea. Despite the two countries remaining on the brink of conflict since the 1950-1952 civil war, there has always been a political faction in the South favouring a magnanimous attitude towards the North. It was this so-called “sunshine policy” that led to the creation of the Kaesong Industrial Complex by South Korean companies. The complex in North Korea employed 55,000 North Koreans and funnelled hundreds of millions of dollars into the North’s economy. But after the January underground nuclear weapon test, South Korea has shut down the Kaesong complex.

This reflects changing attitudes in the South and the death of the “sunshine policy,” even among the liberal opposition parties. After she came to office in 2013, the conservative President, Park Geun-hye, tried to use the Kaesong development to stimulate the relationship between Seoul and Pyongyang. She has now given up any hope that Kim Jung-un is a leader who she can deal with.

At the same time, Park appears to have ended her cozying up to Beijing, which marked her first years in office and which alarmed both Washington and Japan. Beijing’s evident unwillingness to do anything serious about the threat of Kim and his determination to fit a nuclear warhead on a missile that can cross the Pacific has convinced her that Washington and Japan are more reliable ports in a storm.

Park’s government has started negotiations with Washington on allowing U.S. forces to deploy a Terminal High Altitude Area Defence (THAAD) missile battery in South Korea. It is this prospect that has alarmed China, which believes stationing of a THAAD battery in South Korea undermines the deterrent effect of China’s own intercontinental nuclear missiles.

This concern will undoubtedly have been one of the considerations that led this week to Beijing imposing sanctions on the North beyond those called for in Resolution 2270. These added embargoes have not been formally announced, but there are credible reports from the border region of a marked drop in rail freight traffic between the two countries and Chinese officials making it more difficult to get approval for cross-border trade.

China will probably tighten and loosen these unannounced sanctions as it sees fit. Pyongyang will turn to smuggling, which has proved effective enough to sustain the regime in the past, and hope that Beijing tires of the game relatively quickly.

That is probably a good bet because for Kim and his court much now depends on who wins the U.S. presidency in November. Neither Donald Trump nor Hillary Clinton as President look as though they would bring much joy to Pyongyang or Beijing.

Trump portrays himself as a rank isolationist who would tear up existing free trade agreements, abandon NATO, give nuclear weapons to South Korea and Japan, and tell them to look after themselves. That’s a recipe for chaos if ever there was one.

It was Clinton’s husband, Bill, who first marshalled international efforts to get North Korea to give up its nuclear weapons program in return for economic aid and diplomatic acceptance. Hillary Clinton has already had a lot to do with this file during her fours years as Secretary of State. She understands the intricacies of U.S. relationships with its Asia allies and how the North Korean and Chinese problems play into those partnerships.

Hillary Clinton gave the first clear warning to Beijing that its claim to own most of the South China Sea is a threat to internationally accepted rules on freedom of passage for both merchant marine and naval vessels, and a challenge to Washington’s national interests.

If she becomes President, it is most likely that Clinton will mine the ground she has already staked.