North Korea’s Kim glories in his reign of terror 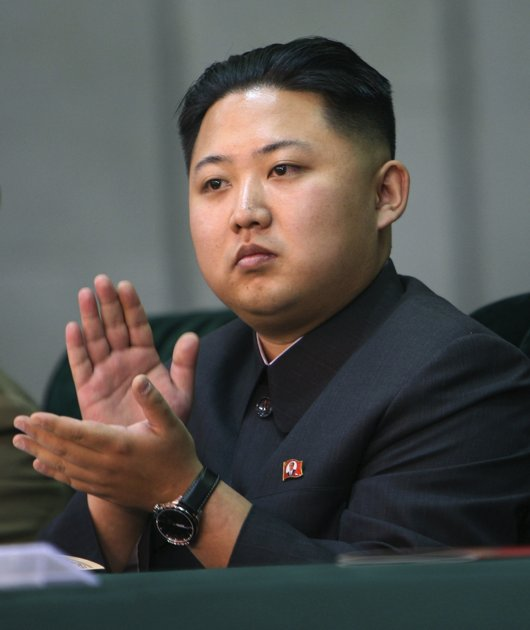 One of the best arguments today for the use of judicious political assassination is the existence of Kim Jong-un.

There is now abundant evidence that the young North Korean leader is a mad dog. The world would be a safer place without his murderous and megalomaniac finger hovering over the launch button for his nuclear weapons and inter-continental ballistic missiles. And without the evil ministrations of his pointless regime, North Korea’s 25 million people would have the opportunity to make something worthwhile out of their ravaged country.

Whether any competent agency is considering options for Kim’s euthanasia we will probably only know after it has happened. But the number of powerful people who have any interest in Kim’s continued existence is shrinking fast. Most significantly, even the neighbouring regime in Beijing, which has supported the North Korean Marxist monarchy since it came to power with Kim Jong-un’s grandfather, Kim Il-sung, in 1948, shows every sign of having lost patience with the bloodthirsty petty tyrant in Pyongyang.

Kim Jong-un set off a reign of terror as soon as he took over the leadership on the death of his father, Kim Jong-il, in December 2011. According to South Korea’s spy agency, the National Intelligence Service (NIS), Kim, who is about 30 years old, has ordered the deaths of about 70 senior officials since coming to power, 15 of them this year.

This week the NIS briefed Seoul parliamentarians on what the agency says is the latest high-profile purge in Pyongyang. At the end of April, said the NIS, Kim ordered the killing of the chief of North Korea’s armed forces, Hyon Yong-chol. Hyon’s crimes, according to the NIS briefing, were showing disrespect towards Kim, disregarding some of his orders, and dozing off during a military parade being overseen by Kim.

The crisis point in Hyon’s career appears to have come earlier in April when he was dispatched to Moscow to speak at a security conference. Another, and more important task was to negotiate an arms deal in return for Kim attending Russia’s massive May 9 military parade marking the 70th anniversary of the defeat of Nazi Germany. Hyon apparently didn’t seal the deal and Kim did not attend the celebration, which was also boycotted by many Western leaders because of President Vladimir Putin’s military support for separatists in eastern Ukraine.

Hyon is the fourth head of the armed forces to be purged since Kim came to power, though he is the first one reported to have been executed. And the nature of the execution is particularly grisly. The NIS says the killing was done at a small-arms firing range at Kanggon, 22 kilometres north of Pyongyang. Hundreds of senior officials were required to watch as Hyon was killed by fire from a four-barrelled ZPU-4 anti-aircraft machinegun.

This weapon is made of four standard Soviet-Russian 14.5 mm calibre heavy machineguns, each capable of firing 600 rounds a minute. It is a very powerful gun designed to shoot down aircraft flying at up to 5,000 feet, 15,000 meters. Hyon’s body would have been ripped to shreds in a matter of seconds. The impression such a spectacle made on the audience of senior North Korean officials in Kim’s regime is easy to imagine, and that, undoubtedly, was the point.

South Korea’s NIS has a patchy record in its claims about what is going on in Pyongyang. Sometimes its reports have been totally inaccurate. And although there has been no official confirmation from the North of Hyon’s departure from office, there is some compelling evidence that the ZPU-4 anti-aircraft guns have become a method of execution favoured by Kim. In April the United States-based Committee for Human Rights in North Korea released satellite pictures taken last October of the firing range at the Kanggon Military Training area. The range is of standard dimensions for small arms target shooting; about 100 meters long and 60 meters wide. But the satellite picture appears to have been taken just before an execution. It shows what analysts say are six ZPU-4s lined up at the firing position and pointed down the range at about a dozen people who appear to be tied to stakes.

The set up conforms to several reports in the last couple of years of Kim using the anti-aircraft guns to maximize the horrific drama of executions. The ZPU-4s were reported to have been used in executions following the purge of artists in the summer of 2013 and also for the killing of two top officials in December the same year.

These two officials were close aides to Kim’s uncle, Jang Song-thaek, who was executed after a farcical trial in which he was accused of “factionalism and committing crimes damaging to the economy.” It was this killing more than any other that caught the world’s attention and marked Kim as a young man of unusual ruthlessness.

Jang had been designated by Kim’s father, Kim Jong-il, as he lay dying to guide and assist the new young leader as he took over the levers of power. Jang has a turbulent history, pockmarked with evidence of personal ambition, so it is possible he figured mentoring the young Kim, then in his late 20s, was an opportunity to seize power himself. If so, Jang clearly misjudged the ruthlessness of his ward.

In this Kim was following the family tradition. Utter ruthlessness is the hallmark of the Kim dynasty and each heir to the throne has felt it necessary to prove his worth by committing acts callous blood-letting. In 1983, while the heir apparent, Kim Jong-il ordered a bomb attack in the then Burmese capital Rangoon, which killed 17 visiting South Korean senior officials, including four cabinet ministers. Kim Jong-il bolstered his credentials further in 1987 when he ordered a bomb to be planted on a South Korean airliner. All 115 people aboard were killed.

Kim Jong-un’s baptism of blood is widely believed to have been the March 2010 sinking of the South Korean Navy corvette Cheonan, in which 46 sailors died. A multi-national investigation into the sinking concluded the ship was sunk by a torpedo fired by a North Korean midget submarine, though this is disputed by China and Russia. A few months later, in November, North Korea suddenly began an artillery bombardment of the South Korean island of Yeonpyeong. Four South Koreans were killed and 19 wounded. The immediate reasons for the attack remain a topic of speculation, but a common view is that it was another move to establish Kim Jong-un’s reputation for ruthlessness.

Among outside experts on North Korea – a very small band of people, none of whom claims to have authoritative knowledge – the feeling is that Kim’s continuing bloodbath is merely his way of consolidating power. It should not be taken as an indication he feels threatened or that his regime is about to collapse.

However, Kim Jong-un has made one significant mistake his father was always careful to avoid. Young Kim has lost the support of Beijing, which now sees China’s strategic interests better served by developing its relationship with the South Korean government in Seoul rather than the murderous Borgia court in Pyongyang.

Beijing’s breaking point was probably Kim’s killing of his uncle, Jang. For years Jang had been Kim Jong-il’s main link man with Beijing, where Jang was well regarded. It was logical for Beijing to think that when Kim Jong-un came to power with Jang at his elbow, a new era of political and economic co-operation between China and North Korea was in the offing. Thus the killing of Jang was, in Beijing’s eyes, a spurning by Kim of Pyongyang’s relationship with China.

For decades, Beijing has seen its strategic interest as preventing the reunification of the two Koreas, divided at the end of the Second World War. Beijing feared that reunification with economically powerful Seoul as the dominant partner would bring South Korea’s military allies, the Americans and the Japanese, right up to China’s border on the Yalu River. Thus it was seen as in Beijing’s interest to keep the peninsular divided and prop up the Kim regime, even when it slaughtered its own people by the millions through economic incompetence and embarked on a dangerous and regionally destablizing program to build nuclear weapons.

In the last couple of years Beijing’s calculation has been modified, however. Beijing has worked at rapidly developing its economic and political relationship with the Seoul government, especially since President Park Geun-hye came to office in February 2013. She has been very willing to echo Beijing’s anti-Japanese propaganda, and to give Beijing some hope that it can drive a wedge in the Washington-led strategic alliance in Asia.

With Seoul as an increasingly dependable ally, Beijing need to prop up the Kim dynasty is withering. Whether Beijing will take the next logical step and engineer Kim’s downfall is another matter. But as Kim flays about him, slaughtering foes real and imagined, Beijing’s antipathy is probably the greatest danger he faces.