It’s not just China’s “Red Nobility” and Russian oligarchs who are robbing their countries by illicitly exporting their wealth to compliant and complicit countries like Canada.

There is an epidemic of money flight from developing countries, according to a new report from the Washington-based anti-money laundering organization Global Financial Integrity (GFI).

In many cases the amounts of money being siphoned out by the wealthy into tax havens or what are seen as secure economies like Canada dwarf the amounts those countries have available to spend on health, education or infrastructure investment. In many cases among the 82 countries examined in the GFI study, the illicit export of money by the wealthy is more than inward investment, more than foreign development assistance or, in some cases, more than all government tax revenue. 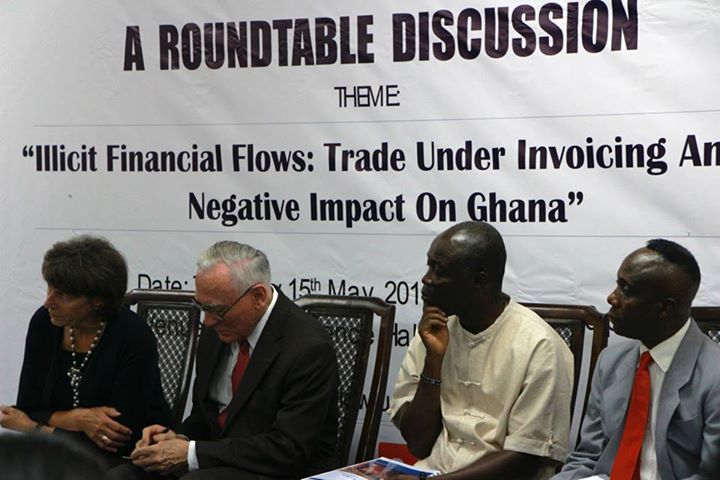 Delegates at a Global Financial Integrity conference, “Hiding in Plain Sight,” in Accra, Ghana, in May. Photo: GFI Facebook page

This illicit, and usually illegal, flow of money – about US$6.6 trillion between 2003 and 2012 and increasing at over nine per cent a year according to GFI – is robbing developing countries of their capacity to manage their own advancement. They are being consigned and confined to poverty by the ravages of their kleptocratic elites.

It is already evident that the ease with which the wealthy can move their fortunes to overseas safe havens is a contributing factor in the growth of economic disparity – the widening gap between the rich and the rest — not only in developing countries, but in the world at large.

Countries like Canada, the United States, Australia, and the European Union, which are favourite havens for the kleptocrats, are far from being innocent bystanders.

In previous reports the GFI has calculated that about 80 per cent of all illicit money flight is done through false invoicing. In most cases this will require the trade partners in the target haven countries to conspire in providing false documents to enable the illicit export of money. It may even require the partners in places like Canada to keep hidden slush funds and deceive Canadian tax authorities about the source and purpose of the money. But Canada seems to have very little data on the amount of illicit money flowing into country and how it gets here. The realization that Canada is in danger of importing corruption along with the money has taken hold with Canadian government and police officials, but their political masters have yet to grasp the threat this money represents. Or, if the politicians have grasped it, they are wary of addressing it, no doubt for a variety of reasons.

Beside the gargantuan amounts of money being slipped out of China and Russia by corporate barons and corrupt ruling party officials, who are usually closely related, the money fleeing the 82 developing countries examined by GFI often seems footling. The amount of money illegally fleeing China is increasing dramatically year by year and is on track to hit US$320 billion or more in 2015, according to figures recently released by the People’s Bank of China. About US$100 billion is slipped out of Russia illegally every year, most of it destined for Western Europe, especially London, or other welcoming European states like Cyprus.

Beside these massive numbers the annual average US$3.5 billion exported illicitly from Ethiopia can seem of little consequence. What this latest GFI report does, however, is look at the money outflows in the context of developing countries’ economies, especially their gross domestic products, trade volumes, foreign direct investment, tax revenues and spending on social service such as health and education. Through those windows, Ethiopia’s loss of US$3.5 billion a year looks rather more imposing. It is 1,355 percent of the foreign direct investment flowing into the country. As bad as that sounds, Ethiopia is only eighth on that list. Nepal, now struggling to recover from the devastating earthquake, tops the list with fleeing money averaging US$754 million a year representing 18,568 percent of inward foreign investment.

Ethiopia is also well down the list when the US$3.5 billion fleeing money is measured against the country’s gross domestic product. It represents 11.2 percent of GDP and Ethiopia is 18th in the ranking of developing countries. If money flight from Canada represented 11 percent of GDP, there would be panic in the streets. As dire as this is for Ethiopia, however, it does not stand out beside the plights of others higher on the list, most of them in Africa.

The sliver-thin West African state of Togo tops this ranking with illicitly exported money representing 76.3 percent of the country’s GDP. Liberia is second at 61.6 percent.

Togo also tops the rankings when fleeing money is measured against total trade. According to the GFI report, the money being exported illegally represents 105 percent of the country’s trade. However, GFI points out that Togo is a highly sophisticated centre for smuggling goods into neighbouring Nigeria, so official trade statistics are undoubtedly distorted and probably under represent the real trade figures.

But, says the report, “there can be no clearer indication that a nation is suffering the ill-effects of a severe countervailing economic force” than when illicit money fleeing the country is larger than both incoming official development assistance and inward foreign investment.

Even some developing countries that are often seen as on the right track are losing more money to illegal flight than they can in foreign investment. Money fleeing the Philippines, for example, represents 518 percent of inward foreign investment. And in Zambia, an increasingly important mining centre in south-eastern Africa, the fleeing money is nearly three times the amount of investment coming in.

One of the stark indicators of what the money lost overseas represents is in the comparisons with the governments’ spending on health and education. It is not a direct comparison, of course, because not all the money, nor all the tax revenue on it, would be spent on social services if it had stayed in the country. Even so, in over 40 per cent of the 82 countries studied, the amount of money fleeing the country is more than is being spent on either education or health services. In some cases it is dramatically more. In Liberia, for example, 16 times as much money is slipped illegally out of the country every year than is spent on education. But even in a country further down the list, 10th ranked Laos, three-and-a-half times as much money is spirited abroad as is spent on education. Laos’ numbers on the health spending comparison are pretty much the same.

The work by GFI provides compelling evidence that the flight of money from developing countries like the 82 studied here and from endemically corrupt countries like China and Russia does great harm to those countries and prospects for their people. Less clear at this point are the effects on the countries like Canada where the money ends up. There are good reasons to worry that the money comes with a heavy infection of corruption, which in the end will far outweigh any benefits from the inward investment. Canada has been notably lagging behind related economies such as Australia, the U.S. and the European Union in at least trying to gather data on the situation.

There was a missed opportunity earlier this week at the G7 summit in Germany of highly industrialized countries. British Prime Minister David Cameron last week promised to put corruption and the illicit flow of money on the summit agenda. However, the communique at the end of the meeting only reiterates past commitments to exchange information on money flows and to promote transparency, especially on the central issue of who owns what.

The GFI contends there’s much more that needs to be done. The organization argues that the United Nations needs to recognize the impact illicit money flows has on sustainable development goals, and to react accordingly.

An essential element in the illicit and illegal transport of money, especially via false invoicing, is corrupt or ill-trained customs agencies, says the report. Some countries should adopt the promotion of customs agency training as an element in their foreign aid programs.

There should be public registries in all countries logging the true ownership of all legal entities and of property. The same rules should apply to all accounts in financial institutions.

And multinational companies should be required to fully disclose their accounts for every country in which they operate, says GFI.