Japan deals itself in to the Asian poker game

Japan this week launched a three-pronged response to China’s growing military and diplomatic shadow over Asia.

In Singapore today, Japanese Prime Minister Shinzo Abe pledged his country’s “utmost support” for the countries of Southeast Asia that are locked in increasingly tense confrontations with China over Beijing’s claims to ownership of most of the South China Sea. 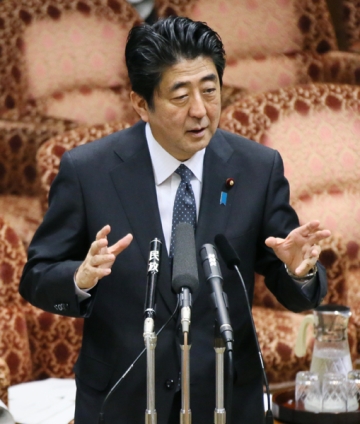 Japanese Prime Minister Shinzo Abe speaking this week at a meeting of Japan’s House of Councillors Committee on Foreign Affairs and Defense. Government of Japan photo.

On Thursday, Tokyo announced a breakthrough in talks with the North Korean government that could give the Japanese government a significant renewal of its political influence in the Far East, a status that has waned in recent years.

And on Tuesday, a parliamentary panel of members of Abe’s ruling Liberal Democratic Party and their New Komeito party allies put forward suggestions for revisions of Japan’s post-war pacifist constitution. The changes would allow Japan’s military, now limited by narrow definitions of national self-defence, to use lethal force in United Nations-mandated operations and in the aid of allies, especially the United States.

Taken together, these three initiatives mark a significant departure for Abe, who became Prime Minister for the second time in 2012 with a mandate to reform Japan’s moribund economy and to reassert the country’s international status in the face of Beijing’s mounting ability to dominate the Asian agenda.

The better-than-expected results so far from the Prime Minister’s so-called “Abenomics” reform program have given him the political backing to pursue his nationalist agenda. However, he must tread carefully because memories linger in much of Asia about the horrors of Japanese military imperialism in the 1930s and 1940s. For the moment those doubts are overshadowed by the more immediate concerns over China’s evident territorial ambitions. But that could change.

Abe must be equally sure-footed at home where a large percentage of the population supports the pacifist Article Nine of the American-imposed constitution.

Today, Abe became the first Japanese Prime Minister to address the annual Shangri-La Dialogue on regional security issues held in Singapore. The conference comes at a time of mounting tension as China aggressively pushes its claims to the Japanese-controlled Senkaku Islands in the East China Sea, and the maritime exclusive economic zones of Vietnam and the Philippines in the South China Sea.

For months, Chinese warplanes and ships have been brushing up against the Japanese military over and around the five uninhabited Senkaku Islands, which the Chinese call the Diaoyu. Japan says that Chinese warplanes have sometime come within a few meters of its own aircraft, heightening the possibility that an accident or misjudgement could lead to a military clash.

Meanwhile in the South China Sea, which Beijing claims to own right down to Indonesian waters over 1,500 kilometers from the nearest undisputed Chinese landfall, China is building military outposts on islands and islets claimed by the Philippines.

In the last two weeks, Beijing has sent an oil exploration rig, protected by about 100 military vessels, into Vietnam’s maritime exclusive economic zone. This highly provocative intrusion has led to clashes between Chinese and Vietnamese warships, and the sinking of one Vietnamese fishing boat. So far these clashes have not involved the use of weapons.

Beijing has been adept at foiling attempts among the 10 countries of the Association of Southeast Asian Nations (ASEAN) to fashion a united response to China’s aggression. China has twisted the arms of the inland ASEAN members with whom it has strong economic ties and no territorial disputes to ensure no consensus is possible.

But Japan is already enhancing its relations with ASEAN by significantly increasing its investment and commercial relations with the region. Abe’s message that Japan and ASEAN have common cause in resisting Beijing’s expansionism will bolster the resolve in several regional capitals.

“Japan will offer its utmost support for the efforts of the countries of ASEAN as they work to ensure the security of the seas and the skies, and thoroughly maintain freedom of navigation and freedom of overflight,” Abe said.

One of the most emotive issues in Japanese politics for over a decade has been how to respond to Pyongyang’s admission in 2002 that in the 1970s and 1980s it kidnapped several Japanese — often plucked by submarine-borne special forces from beaches and streets of seaside towns — to use as language and cultural trainers for North Korean spies.

Soon after Pyongyang’s admission, five abductees and their families returned to Japan, and North Korea said another eight kidnapped Japanese had died. This satisfied neither public opinion in Japan nor the government, which has identified another four abductees, and which believes the true number could be as many as a hundred.

Relations between Tokyo and Pyongyang soured. And as Japan imposed almost total sanctions on North Korea, Tokyo’s influence and ability to function shrank as members of the group of six nations attempting to dismantle Pyongyang’s nuclear weapons program.

However, after months of talks in Sweden, North Korea has agreed to conduct a full investigation into the number and fate of the Japanese abductees. In return, Tokyo says it will restore ferry links between the two countries and, if Pyongyang continues to live up to the agreement, to give humanitarian aid, technical assistance and investment.

Pyongyang is never a reliable partner, but if this deal holds, it puts Tokyo back in the centre of efforts to deal with the rogue regime of leader Kim Jong-un, a file that has become dominated by China.

Abe has had to sidle up carefully on the issue of Japan’s constitutional pacifist status, which allows the country’s so-called “self-defence forces” to be used only to confront a direct military assault on the country. Instead of attempting to remove Article Nine, which would arouse significant opposition at home and abroad, Abe is moving to “re-interpret” the clause. This will allow Japanese forces to support Tokyo’s allies and to deploy it military in support of United Nations and other international missions.

These moves are being welcomed in Washington, which for years has been urging Tokyo to assume more of the burden of maintaining security in Asia. The changes are also being applauded by Australia, which despite its heavy reliance on trade with China, is involved in several efforts with allies to contain Beijing’s evident drive for regional power and territorial expansion.

Canberra hopes, too, to buy submarines from Japan after the limited success of its own building program and its failure in the 1970s and 1980s to get any interest from Ottawa for a joint submarine construction project.