Iranians close in on Aleppo, not Mecca 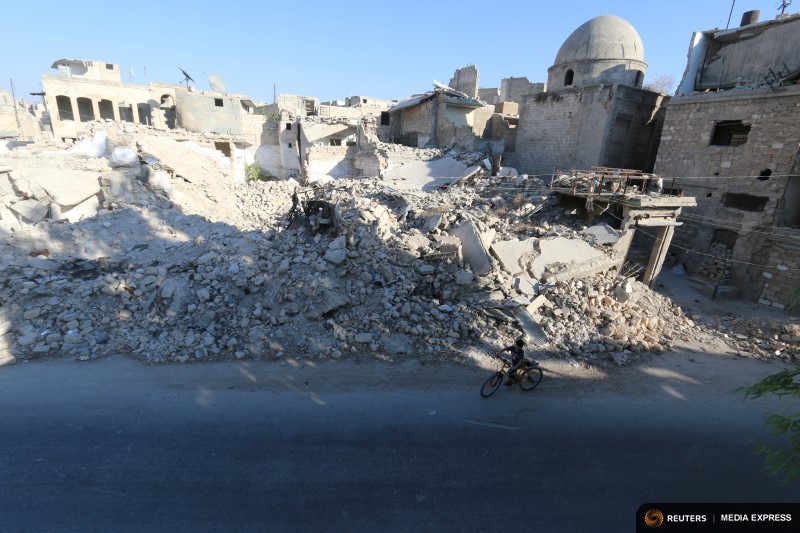 A boy rides a bicycle near rubble of damaged buildings in the rebel held al-Maadi district of Aleppo, Syria, August 31, 2016. REUTERS/Abdalrhman Ismail

There will be no Iranians this year among the two million Muslims who make the hajj pilgrimage to the holy sites at Mecca and Medina in Saudi Arabia that starts on Sunday, September 11.

About 60,000 Iranians joined the pilgrimage last year, but now they are barred as part of the increasingly sharp-edged struggle for power in the Middle East between Tehran and Saudi Arabia.

But at least this religious embargo is a relatively peaceful, diplomatic skirmish. Sixteen hundred kilometres to the north of Mecca in the Syrian city of Aleppo the contest between Iran and Saudi Arabia is being fought street by street. It is a war of barrel bombs, gas attacks, targeted hospitals, artillery barrages, and the threat of snipers lurking on every roof top and in the dark behind every shattered window. As always, civilians are the main casualties in the bloody urban warfare being waged in large part by proxy armies for Riyadh and Tehran.

Iranians may be suffering the embarrassment of being barred from the hajj this year, but on the battlefield it is Tehran’s senior military officers and their allies fighting for Syria’s President Bashar al-Assad who are poised for victory against the Saudi-backed Syrian rebels in the five-year civil war.

The prelude to a cease fire announced on Friday by United States Secretary of State John Kerry and Russian Foreign Minister Sergey Lavrov offers a slim sliver of hope. But the central strand of the Washington/Moscow accord is an agreement to co-ordinate their own attacks on the terrorist Islamic State group and the Nusra Front, which is allied to al-Qaida. It is not immediately obvious what benefits the deal offers the Assad regime and its Iranian backers or the Saudi-supported moderate rebels. Even less apparent is what pressure either Moscow or Washington can put on their factions to enforce a cease fire.

The rebel hold on Aleppo, Syria’s largest city and commercial hub, began to slip a year ago when Russia intervened on Assad’s side and backed the regime’s ground forces with its airforce. Since then the Saudi-backed rebel forces and Aleppo’s remaining civilian population have suffered slow strangulation as one after another of the supply routes into the city were cut off by the encircling regime troops.

This week the pro-Assad forces captured the Alramousa Road, the last supply route into the rebel-held areas of Aleppo. It is clear the regime’s coalition is preparing for a final assault on the city, and it seems highly unlikely that the rebels will be able to hold out.

The recapture of Aleppo by the pro-Assad forces will not be the end of the five-year civil war. Rebels still hold other territory, the Kurds control large areas along the northern border with Turkey and the terrorists of the Islamic State group are still well entrenched in the desert regions on both side of the eastern border with Iraq. But the collapse of the rebellion in Aleppo will put most of the Syrian economic heartland – or what remains of it – back in the regime’s hands and almost ensure that Bashar al-Assad himself survives whatever ceasefire process finally ends this calamity.

And Iran’s reputation, influence and power in the Middle East will rise along with Assad’s survival. Saudi Arabia will suffer the ignominy of failure to adequately support the Syrian rebels at a time when it is also bogged down in the civil war in Yemen. The intervention in Yemen ordered by Saudi Arabia’s young heir to the throne and defence minister, Prince Mohammed bin Salman, is not going well. The Saudi forces have failed to roll back the advance by Houthi rebels, who are backed by Iran. The partition of Yemen now seems likely.

Iran signalled on Tuesday that it feels confident that it has the upper hand over Saudi Arabia. Several Middle Eastern news outlets published pictures of Iranian General Qassem Soleimani inspecting pro-Assad forces in and around Aleppo during the preparations for the assault on the last rebel hold-outs in the city.

Gen. Soleimani is among the most potent military commanders in the Middle East at the moment. He is the leader of Iran’s elite foreign operations troops, the Quds Force of Iran’s Islamic Revolutionary Guards Corps, which is the mainstay of the regime of Supreme Leader Ayatollah Ali Khamenei.

There has been a significant change in the make-up of the forces under Gen. Soleimani’s command in recent months after the Quds Force suffered significant losses, especially among officers, who take pride in leading their troops from the front. To counter rising public indignation in Iran at the death toll, more reliance is being put on Iran’s allied and proxy forces. Among the many thousands of troops under Gen. Soleimani’s command are large contingents of fighters of Hezbollah, the Iranian trained and funded militias from neighbouring Lebanon. He also has about 8,000 fighters from Harakat al Nujaba from Iraq, and others from even further afield. There are contingents from the Afghan Fatemiyoun and the Pakistani Zeynabiyoun.

Some military analysts see in this multi-national composition of the Quds Force the development of a foreign legion by Iran that it may use widely throughout the Middle East to serve its perceived interests. It is evident that since Tehran signed an agreement last year with the United Nations and the five permanent members of the UN Security Council – the United States, China, Russia, France and the United Kingdom – plus Germany to open its nuclear development program to inspection it has become more active in the region. The removal of economic sanctions and the lifting of diplomatic isolation have given Tehran the confidence and assets to pursue its interests without fear of serious diplomatic repercussions, especially from Washington.

What all the Quds Force militias have in common with Iran as well as with the Assad regime is that they are followers of the Shia faction of Islam. Saudi Arabia, on the other hand, is the leader of the orthodox Sunni branch of Islam, which it regards as the only legitimate interpretation of the religion. While this religious divide is undoubtedly a powerful motivator among supporters of both interpretations of Islam, it is also often a convenient distraction from the essentially worldly thrust for power in both the Iranian and Saudi regimes.

The current outbursts on the religious front from both Tehran and Riyadh stem from a deadly stampede during the hajj last year in which about 2,300 foreign pilgrims were killed, including nearly 470 Iranians. Iranian leader Ayatollah Khamenei has been highly critical of the Saudi authorities, saying the hajj was badly organized. He also lambasted Riyadh for showing insufficient remorse for the deadly incident, as well as lack of resolve in trying to find out who was directly responsible.

Matters came to a head on January 2 when Saudi Arabia executed the imprisoned prominent Shia cleric Nimr al-Nimr. Nimr had been in custody since 2011, accused of leading a protest movement among the Shia minority in Saudi Arabia’s Eastern Province.

Riyadh tried to dull the impact of its killing of the esteemed cleric by at the same time executing three other Shia protesters and 43 militants from the al-Qaida terrorist group. It didn’t work. Angry crowds stormed and gutted Saudi Arabia’s embassy in Tehran, and on January 3 diplomatic relations between the two were cut.

They remain severed, hence the inability of Iranians to join this year’s hajj. But the rhetoric has not dimmed. On Monday, Iranian leader Khamenei published a diatribe against the Saudi monarchy calling the Riyadh regime a “small and puny Satan” that has politicised Islam in order to maintain its relationship with Washington.

“The world of Islam, including Muslim governments and peoples, must familiarise themselves with the Saudi rulers and correctly understand their blasphemous, faithless, dependent and materialistic nature,” he wrote in a statement on his website.

The Saudi royal family has shown itself unqualified to act as custodians of Islam’s holy sites in Mecca a Medina, or to administer the hajj, he said. “The world of Islam must fundamentally reconsider the management of the two holy places and the issue of the hajj,” wrote Khamenei.

“We have to understand that they are not Muslims,” he said, adding that Iranian leaders are sons of “magus”, a reference to Zoroastrianism, the dominant belief in Persia until the Muslim Arab invasion of the region that is now Iran 13 centuries ago.

The Saudi regime and its Sunni clerics usually try to hide their disdain for the Shia and believe that they are not true Muslims. But as the power play in the Middle East gathers pace, all courtesies will be abandoned.