Human Rights: There’s an App for that 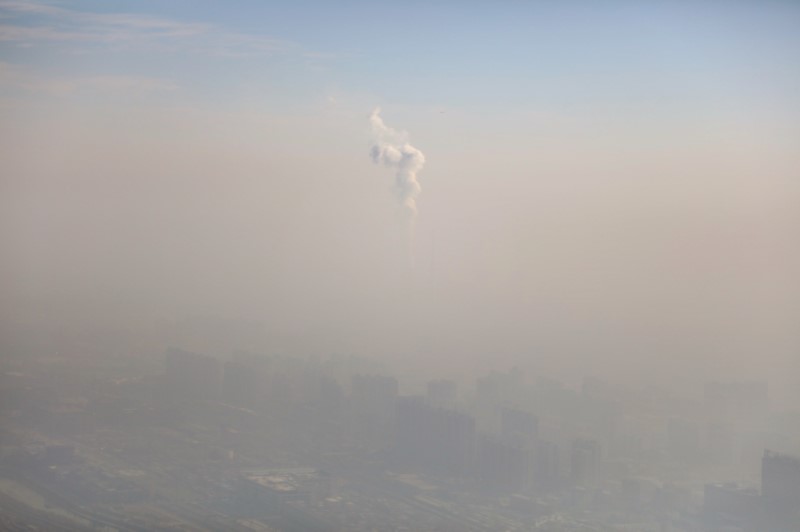 A chimney of a power plant is pictured among smog as a red alert for air pollution is issued in Beijing. REUTERS/Stringer

At the heart of one of the most effective and simple human rights campaigns of recent years is a box on a roof in Beijing.

In its quiet way, that box has confirmed for the Chinese people what they instinctively knew; that their government lies to them consistently about the state of the country.

It has also been an instigator of a middle class protest movement that has sent the ruling Communist Party scurrying to respond.

Indeed, it is easy to imagine scenarios in which that unassuming rooftop box trips a chain of falling dominoes that drives the Communist Party from power.

The box is an air quality monitor and it was installed in 2008 atop the United States Embassy in the diplomatic Chaoyang district of Beijing, a couple of kilometres from Tiananmen Square and the Forbidden City. The original idea behind setting up the monitor was to provide information to embassy staff and other Americans about Beijing’s notorious air polluting smogs. The monitor was set to Tweet out air quality readings every hour, and thus give recipients some opportunity to protect themselves against the worst pollution.

According to a Peking University study, close to 3,000 people die prematurely each year in Beijing because of air pollution, which regularly hits more than ten times the level the World Health Organization considers safe. Nationwide in China, smog kills nearly two million people, mostly as result of burning coal to fuel China’s power grid and the archaic industries behind its economic revolution of the last 30 years.

This week in Beijing and the surrounding province was typical. In much of northern China on Monday the pollution level hit 400 micrograms per cubic meter of air. The WHO identifies the tiny particles known as PM 2.5 as the most dangerous because they can cause lung disease and even enter the blood stream. The organization says 25 PM 2.5 micrograms per cubic meter of air is the safe level.

On Wednesday the Beijing authorities issued a “red alert,” saying air pollution was at the highest level and hazardous to health. Smog brought down visibility to less than 50 meters, and many flights had to be cancelled. At Tianjin, the port city 100 kilometres from Beijing, 2,000 people were stranded on a cruise ship for two days because the smog was too thick for the vessel to be able to dock safely. Indeed, on Tuesday the maritime safety authorities stopped harbour traffic in all three of China’s main northern ports because of smog.

For years, the Chinese authorities have conducted an Orwellian campaign of disinformation aimed at convincing people not to believe the evidence of their eyes and wheezing lungs. Then, along came the monitor on the roof of the U.S. embassy, whose hourly Tweets were quickly picked up and rebroadcast by local groups, such as Air Quality in China (aqicn.org) on their own sites. Beijing residents quickly decided that the readings from the U.S. embassy roof were a good deal more reliable and accurate than the fanciful figures put out by Chinese authorities. For example, a comparison of the readings from the U.S. embassy monitor and those taken by local authorities at the nearby Chaoyang Agricultural Exhibition Centre show that the readings from the embassy roof are regularly 50 per cent higher, and often much more.

The popularity of the U.S. embassy readings and the implicit criticism from Beijing residents that they didn’t believe a word the Chinese authorities were telling them bit deep.

As is often the case with the Chinese Communist Party, its first instinct when challenged by its citizens or anyone else is to strike out. The authorities ordered the embassy to stop releasing the air monitor data, saying “such readings were illegal.” When that didn’t work and the embassy stuck to its guns, Chinese state-controlled media mounted a massive campaign of propaganda articles explaining in copious detail why the U.S. embassy readings were so much higher than those from the local authorities’ monitors.

In November, 2014, as Beijing was about to host the summit of the Asia-Pacific Economic Co-operation forum, the authorities leaned on the people running the Air Quality in China web site and forced them to stop running the readings from the U.S. embassy monitor. Over three years later, that ban is still in force, though the aqicn.com site still has the readings from the nearby Chaoyang Agricultural Exhibition Centre monitor.

But even as the Communist Party was trying to gallop over public criticism of both air quality and the party’s dishonesty about the situation, it was beginning to take the matter seriously. China’s air quality and other pollution issues were at the core of a distinct shift in social awareness around 2013.

For years China has experienced extraordinary levels of social unrest that go largely unseen and unrecorded in the West. The Chinese Academy of Social Sciences (CASS), the main think tank gathering information and offering advice to China’s government, collects information on riots and another incidents of communal unrest. It pays particular attention to what are called “mass incidents,” which are defined as riots involving more than 1,000 people and which require riot squads or other violent police action to restore order.

The CASS used to publish each year the number of such incidents, but gave up doing so around 2011, after the number had stuck for several years at around 180,000 incidents over a 12 month period. That’s close to 500 riots a day on average, and even though CASS no longer publishes the figures, people in the know say the annual numbers have not changed much in the last five years.

What has changed, though, is the reasons for this tide of riots. Until about 2013 the vast majority were spurred by popular unhappiness at some piece of corruption or other venal act by local party officials, or their relatives or cronies. But about four years ago that changed and the main cause of riots became public outrage at China’s deadly reality of air, water and soil pollution. It is not only China’s air that is deadly. Most food and water are contaminated by toxic heavy metals. Chinese who can afford it spend large amounts of money buying imported food and bottled water from countries with strong food safety regulations.

In an essay late in 2013, David Roberts, the former Regional Strategic Advisor for USAID-Asia, noted that earlier that year the Chinese authorities had set up sensitive air quality monitors capable of reading pollution levels about 500 micrograms of PM2.5 per cubic meter in over 70 cities around China. At the same time, Beijing announced plans to spend billions of dollars on pollution reduction and announced ambitious targets to clean up the air in China’s major cities.

(The Americans have kept pace and installed roof-top monitors in all their consulates across China.)

Improvements cannot come fast enough for Chinese city dwellers. A major question for the authorities is how patient the citizenry will be. The evidence from this week is that citizens in Beijing in particular are at the end of their tether.

Although the air pollution levels in Beijing were especially bad this week, the capital has been under a pall of smog for close to a month. It is so bad that many children have fallen sick, and are coughing and wheezing. Early in the week people began sharing their experiences and outrages on a social network site called WeChat. On Wednesday, an online petition was set up demanding that the authorities install air filtration systems in the capital’s schools. Within 24 hours the site had attracted an audience of about 500,000 and nearly 3,000 peopler had made comments.

The capital city government reacted swiftly to this growing public movement and has now promised to equip Beijing’s schools with air filtration systems. It is an abrupt about face from just over a year ago when the city authorities said such systems could not be installed because of inadequate electricity supplies in most schools. And, anyway, with children barging in and out of school doorways all day long such a system would be ineffectual anyway.

It remains to be seen, of course, whether the Beijing authorities or the administrations in other Chinese cities follow through on the promise. And the greater problem of China’s toxic industries and power plants remains. But for one of the first times in modern history, the Chinese regime has had to listen and respond to citizens’ concerns. That’s a step forward from which it will be hard for the Communist Party to retreat. And a significant role in that achievement was played not by loud banging on about human rights from outside China, but by a box on a roof.