The campaign for and against democracy in Hong Kong has tottered on the edge of farce for some time and this week it tumbled over the edge.

Thursday’s vote in the Hong Kong legislature on plans to allow direct election of the territory’s head of government in 2017, but only after Beijing has vetted the candidates for loyalty, should have been a solemn and significant moment.

It was on the cards that the 27 “pan-democrats” in the 70-seat legislature would deny the Beijing-backed administration and its supporters the two-thirds vote necessary to pass the constitutional amendment, which hardly merits being called a reform. But that could be seen as an affirmation by Hong Kong people of their determination to have their voices heard by the Chinese government and that the flame of democracy continues to flicker in the territory.

Instead the episode cascaded into farce as the Beijing supporters attempted to delay the vote by fleeing the legislature and forcing the end of the session for lack of a quorum. The rules require half the members – 35 – to be present for a quorum. But only 34 pro-Beijingers fled, leaving 36 to vote. The result of the ballot was 28 against and eight in favour.

The grim irony now is the defeat of the so-called reform leaves Beijing fully in control of the selection of the head of the Hong Kong government, known as the Chief Executive. The reform would have given voters among Hong Kong’s seven million people the freedom to vote for the Chief Executive in elections due in 2017 and thereafter. But the free vote would only be for candidates allowed to stand by Beijing after being screened for loyalty to the Communist Party. Hong Kong now reverts to the existing system by which Beijing names a 1,500-member election committee made up of people beholden to the Chinese Communist Party. They are quietly told who to choose. It is not a successful system and has thus far produced three Chief Executives who have become roundly detested by Hongkongers.

This week’s confused and confusing result on the reform vote is in line with the muddled and incompetent way the deeply unpopular administration of Beijing-selected Chief Executive Leung Chun-ying has managed the whole file. Every move by Leung and his administration has only reinforced the public’s conviction that Beijing has no intention of abiding by the promise made in advance of the 1997 return by Britain of Hong Kong to Chinese rule to swiftly institute democratic reforms. 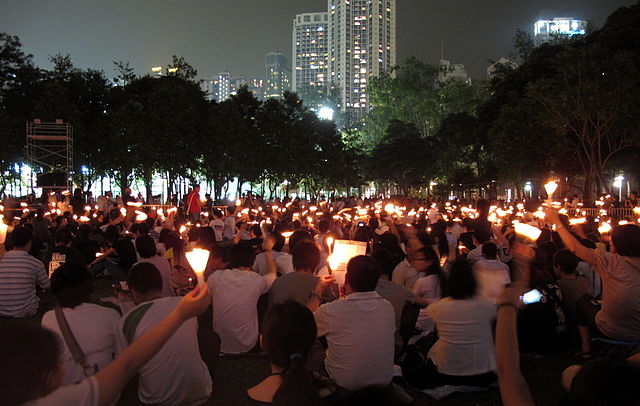 Every June 4 tens of thousands of Hongkongers gather in Victoria Park in the Causeway Bay district to mark the anniversary of the 1989 Tiananmen Square Massacre when Chinese troops killed and detained pro-reform demonstrators in Beijing and at least 250 other cities around China. Photo by Wing via Wikimedia, Creative Commons

Public dismay reached boiling point last summer, when for nearly three months thousands of demonstrators occupied the Central business district and two other commercial hubs in Hong Kong. But this was only the latest and perhaps most dramatic of a long series of demonstrations by Hongkongers either in support of democratic reform or in opposition to moves by the administration they find offensive. On July 1, 2003 , between 500,000 and 700,000 people took to the streets in an entirely peaceful march in opposition to the introduction of legislation which would have imposed mainland Chinese concepts of sedition and subversion on Hongkongers. The bill was dropped and has not been introduced.

Every June 4 tens of thousands of Hongkongers gather in Victoria Park in the Causeway Bay district to mark the anniversary of the 1989 Tiananmen Square Massacre when Chinese troops killed and detained pro-reform demonstrators in Beijing and at least 250 other cities around China. About 135,000 people attended the Hong Kong commemoration this year, down from the 180,000 who attended in 2014, but well up on the 50,000 or so people who gathered each year in the early 2000s.

The question now is whether these protests, which have drawn increasingly rough responses from the police, are the shape of things to come. There is no doubt that a majority of Hongkongers want representative and accountable government. Public opinion polls, such as those conducted by the Hong Kong Baptist University Transition Project, have shown this consistently for over 30 years. How far Hongkongers are prepared to go in that quest is another matter.

The Pan-Democrats – a loose alliance of pro-democracy parties – haven’t come out of Thursday’s vote covered with glory. Indeed, by defeating the proposals for the next Chief Executive election they appear to have defied the feelings of the largest segment of Hong Kong public opinion. There is a strong feeling in the territory that although the proposal is deeply flawed and does not introduce true democracy or free and fair elections, it is a step in the right direction. Perhaps in the future, the thinking goes, Beijing can be persuaded to give up its veto on candidates and allow a true democratic contest.

Many rolling polls in the past few weeks show that close to 50 percent of Hongkongers support that view. For example, a joint poll by several universities and overseen by The Chinese University of Hong Kong shows that support for the reform veered between just over 41 per cent and 49.5 percent. This week, on the eve of the vote, support was 47 percent while 38 percent were opposed.

The first indication of the mood of Hong Kong in the wake of this week’s legislative debacle will probably come on July 1. This will mark the 18th anniversary of the handover and the end of British rule. It has become traditional for the officially-sponsored celebrations to be matched by demonstrations demanding reform. What happens this year will be carefully measured and tested as a barometer of the territory’s mood.

The authorities are clearly prepared for a long period of rolling discord. Beijing and its Hong Kong followers have in recent years been increasingly vehement in characterising the pro-reform movement as not only destabilising, violent, a threat to the territory’s future as a commercial hub for Asia, but also as foreign-inspired. In this, Beijing appears to be pointing a finger at the United States and its many pro-democracy non-governmental organisations, some of which have operated in Hong Kong. Playing to Chinese nationalism is one of the few claims to political legitimacy left to China’s Communist Party government, which has now become a classic, deeply corrupt imperial Chinese dynasty.

As a result there is deep scepticism among cynical Hongkongers and observers of the territory about the arrest on Sunday of 10 people who are accused of being part of a Hong Kong separatist group and of conspiring to manufacture chemicals to make bombs. There’s a strong suspicion this separatist bomb plot was fabricated by the authorities to smear those demanding greater political freedoms.

The record since the 1997 handover is that violence is far more likely to come from the authorities than from Hong Kong’s protesters. There will undoubtedly be continuing street demonstrations in support of a greater political voice for the people, and a significant moment will come next year. That’s when there are due to be direct elections for all 70 members of the Legislature.

At the moment 35 members are directly elected by Hong Kong’s voters. The other 35 are elected by what are called “functional constituencies,” a system inherited from the British, but which has allowed Beijing to keep effective control of the legislature. Functional constituencies represent various professions and businesses – real estate, the law, medicine, teaching, finance – whose registered members select their own members of the legislature. Now, one way or another all these sectors are beholden to Beijing and their legislature members have shown rigid consistency in supporting the desires of the Chinese government.

However, Beijing will not be too worried about the removal of its effective veto on the legislature next year because it will continue to have direct control over the Chief Executive and the administration. But Beijing will undoubtedly work to have its proxy political parties win an overall two-thirds majority in the legislature so that any constitutional changes can be managed with more certainty than this week’s farce.

And if pro-Beijing parties fail to win a two-thirds majority, it’s a fairly simple matter to let the legislature stumble into inconsequence while the authority of China’s pro-consul, the Chief Executive, is boosted.