For the first time, Hong Kong’s Federation of Students, a coalition of student unions, will not take part in the Victoria Park demonstrations. Instead, it will help organize a number of events and demonstrations confronting democracy and even independence in Hong Kong’s future. 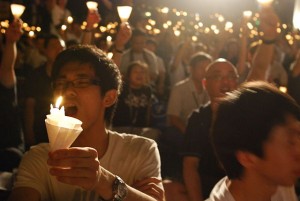 A candlelight vigil in Hong Kong in 2009, on the 20th anniversary of the June 4 incident. Photo by Ryanne Lai/香港人一條心/Flickr, Creative Commons

There will be many fewer people this year at Hong Kong’s annual demonstration to mark the anniversary of the 1989 crushing by the army of the student protests in Beijing’s Tiananmen Square and many other city centres around China.

But the Beijing government should take no comfort from the decision by many student organizations in Hong Kong to boycott the annual gathering, which has regularly seen 100,000 people or more gather for a night-time vigil at Victoria Park in the city’s Causeway Bay district.

The students have decided that the Victoria Park demonstration, with its emphasis on seeking democratic reform in China, does not meet their aspirations. The students want democracy or even independence for Hong Kong. They don’t care much what happens in China and they don’t think it’s their responsibility.

This schism in the pro-democracy movement in Hong Kong should be more concerning for Beijing than the old mass protests every June 4. It stems from the fact that more and more of Hong Kong’s 7.2 million people do not identify themselves as Chinese citizens. They think of themselves culturally and politically as Hongkongers. These feelings are especially strong among the young, which means that this identity crisis is likely to intensify as the years pass.

For the first time, the territory’s Federation of Students, a coalition of student unions, will not take part in the Victoria Park demonstrations. Instead, it will help organize a number of events and demonstrations confronting democracy and even independence in Hong Kong’s future.

Chow Shue Fan, one of the student organizers, told Singapore’s “The Straits Times” newspaper this week: “The candlelight vigil is calling for a democratic China. But we don’t think we are Chinese and so we don’t have a responsibility to remember June 4. Whatever significance it holds for China, it means nothing to us.”

In another interview Chow added that he considers the candlelight vigils to be “part of a package to indoctrinate participants” into believing they are Chinese and that their political fate is inexorably linked to that of China.

It is true that the leading figures of Hong Kong’s pro-democracy movement have usually presented themselves as Chinese patriots whose only problem is the autocratic, anti-democratic instincts of the Chinese Communist Party. They shy away from notions of Hong Kong independence and say the best path to assuring the territory’s autonomy is to promote democracy in China.

This strategy does not impress many of the Hong Kong-nationalist students and young people. An editorial in one student newspaper this week went so far as to characterise the June 4 vigil old guard as “pimps and bawds in a brothel.”

This development is an indictment of the way Beijing has handled its relations with Hong Kong since the territory was handed back to Chinese sovereignty in 1997 after 156 years of British colonial rule.

Yet at the time of the handover Hongkongers had high expectations that Beijing would stick to its agreement with London, allow the territory to continue running itself “with a high degree of autonomy,” observe the continuation of the British-style rule of law, and facilitate the swift transition to full democracy.

That has not happened. Early on, Beijing made it clear that the rule of law applies in Hong Kong only so long as it does not challenge the supreme power of the Chinese Communist Party.

Beijing allowed the autonomy of Hong Kong’s administration and legislative assembly to continue. However, this was only because Beijing ensured it controlled the governors – known as the Chief Executive – and that a majority of the members of the legislature were business people economically dependent on their commercial relations with China.

As for the democracy timetable, well that kept disappearing into the future. Matters came to a head in 2014 when Beijing released a ruling on the direct election of the Chief Executive in 2017. The ruling was that candidates must be “patriotic” and would have to be approved by Beijing.

This sparked what became known as the “Umbrella Revolution,” as protesters, mostly students, occupied two commercial centres in Hong Kong and brought them to a standstill for weeks. The demonstrations got their name because protesters used their umbrellas to fend off tear gas used against them by the police.

These protests closed down the Central business district on Victoria Island and Mongkok in Kowloon for 79 days. These mass occupations and the political debates among the protesters fixed the notions of Hong Kong’s cultural and political separateness from China that had been building since the handover.

The umbrella protests effectively put an end to the plans, however constrained, to directly elect the Chief Executive next year. However, it was a Pyrrhic victory. Beijing will carry on using a committee of its sycophants to “elect” the governor, and is probably quite happy that it will not have to manipulate anything as complex as direct elections for the foreseeable future.

This was not the first time since the handover that Beijing has had its plans foiled by the mass opposition of Hong Kong people. When, at Beijing’s behest, the Hong Kong government attempted to introduce a highly restrictive anti-subversion law in 2003, at least 500,000 people took to the streets in a peaceful march through the city’s main business district. The peacefulness of the march and the participation of very many middle class people not usually associated with the pro-democracy movement made its impact even more powerful. The Hong Kong administration shelved the legislation and has not tried to reintroduce it.

There was another mass protest in 2012 when, again at Beijing’s insistence, the Hong Kong government tried to impose a “patriotic education curriculum” into schools. Again there was a public outcry, and the government backed down.

So this year may mark the beginning of the end of the era of the June 4 vigils, which began in 1989 when at least one million Hongkongers took to the streets in protest when the news of the massacre in Tiananmen Square began to filtre through. And in the following months, Hong Kong became an important sanctuary and escape root for Chinese pro-reform demonstrators who managed to avoid the dragnet by Chinese authorities.

But that was all a generation ago. Hong Kong’s new activists were in their cribs or not even born in 1989. For them, the reality of Beijing’s repression is here and now, and it is trying to impose on them a cultural and political heritage that they find alien and unacceptable.

Beijing will probably find that the new Hong Kong is far more difficult to manage and control than the old one.