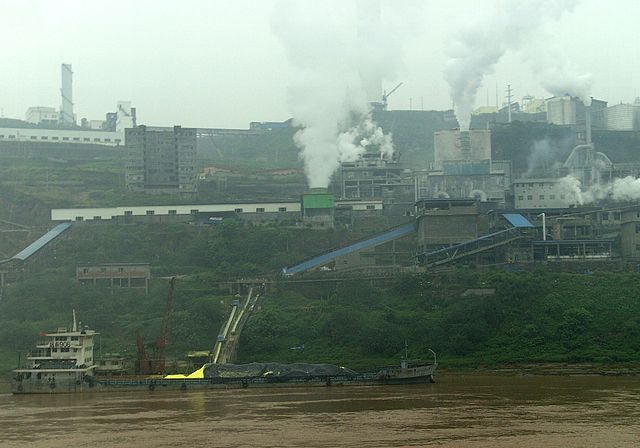 Above, a factory on the banks of China’s Yangtze River. Photo: High Contrast, Creative Commons/ WikimediaF&O provides independent, reader-funded, no-ads, no-spam journalism. Welcome, please try one story at no charge. If you value our work, please visit our Subscribe page to chip in at least .27 per story or $1 for a day site pass. Real journalism costs money to produce. Thank you for your support, and please tell others about us..

China’s 1.3 billion people make up 20 per cent of the world’s population, but the country contains only seven per cent of the world’s fresh water supply. If that were not a meagre enough birthright, what water there is flows in the wrong places for both human consumption and economic development. And to cap the grim picture, water supplies are not only squandered at an astonishing rate, but aquifers and rivers are polluted by industrial waste to the point that much of China’s water supply is not just unhealthy, but actively poisonous.

The parlous state of China’s water supplies has been well documented for 10 years. But the opening sentence of a report this week by the always sober and unexcitable British-based global analysis and risk assessment company, Oxford Analytica (OA), highlights the challenges facing the Beijing regime.

That is putting it mildly. The World Bank says China’s polluting of its scant water reserves is knocking nearly 2.5 per cent off its gross domestic product every year. In 2013, over half the 180,000 riots that year were sparked by public outrage at environmental degradation, principally water pollution. China environment ministry estimates that 320 million people do not have access to safe drinking water. An American academic study has identified 459 “cancer villages” caused by polluted water supplies. The World Bank says that piped water in rural areas is a leading cause of death among children under five years and responsible for about 11 per cent of the cases of stomach cancer across China. A government study in southern China found rice for 40 million people was dangerously contaminated by cadmium industrial waste in the irrigation water. And at any one time around 400 million Chinese — a third of the population – are sick from water-borne illnesses.

That list illuminates some of the reasons for the upward pull on Vancouver house prices from wealthy Chinese seeking safe havens abroad.* Among my Chinese friends the fear of illness or poisoning from the environment in China is rampant. Several of my friends and acquaintances will not take their children on visits home to see grandparents or other relatives because of the illnesses they might contract there. None of my Chinese friends will eat food produced in China.

For those of great wealth, especially if it has been acquired through family or other close connections to the Communist Party, the social upheaval and seething anger of the working classes is another reason to have a bolt hole to run to. The number of riots requiring deployment of the riot squads or People’s Armed Police has been around 180,000 a year for about a decade. That’s just under 500 major incidents of unrest every day on average. Because China has never in its 5,000-year history had a government its citizens could trust, social upheaval and even ongoing insurgencies have been common. A result is that Chinese regimes have much greater tolerance and capacity to absorb communal discord than other societies. Even so, 500 serious riots a day is getting close to the point when it can seem a very good idea to have a house in Vancouver to flee to if the tumbrels start to rumble down the street towards party headquarters.

People who deal regularly with statistics coming out of China are used to being confronted with large numbers that, on examination, boil down to small percentages. That’s a function of the size of the place and its huge population. But China’s dearth of water and the pollution of its scant reserves is an area where both the numbers and the percentages they represent are massive.

The overall picture, according to the World Bank is that 10 of China’s 34 province-level administrative regions – in reality 33 because Beijing insists on including Taiwan, which is an independent country – are below its “poverty level” of 1,000 cubic meters of water per person per year. Another report this year says eight Chinese provinces and municipalities have water resource levels similar to Middle East countries such as Jordan and Syria. And Beijing’s ministry of water resources says 400 of China’s 657 major cities have insufficient water for their populations. Of those 400 cities, the supply in 110 is seriously deficient.

In some cities the depleting of the underground water resources is so great that the cities are sinking. Parts of Shanghai and Tianjin have sunk two meters during the past 15 years as the underground aquifers have been remorselessly pumped out. Subsidence in Beijing has destroyed factories and broken underground pipelines.

The renowned U.S. academic, Elizabeth Economy, one of the leading experts on China’s water problems, says more than 75 per cent of the river water flowing through China’s urban areas is unsuitable for drinking or fishing. She quotes Beijing government officials as saying 30 per cent of the country’s river water is so polluted it is not even safe to use for agriculture or industry. Government officials report that 700 million people – half the population – drink water contaminated with human and animal waste.

Two thirds – 66 per cent – of the water used each year in China goes for agricultural production. But about half that is wasted because of badly designed irrigation systems, leakage and evaporation. Chinese industries are little better. They use up to 20 per cent more water for industrial production than their counterparts in the developed world use for the same processes. About 20 per cent of water piped to industries is wasted due to leakage. Industries recycle only about 40 per cent of water used, compared with 80 per cent in the European Union.

A government survey of 509 cities found that only 23 per cent of factories treated their waste before disposing of it into waterways. Another survey found that a third of industrial waste water and two-thirds of household sewage are released untreated. In 2012, 75 billion tonnes of sewage and waste water were discharged into China’s river. All the waste water came from factories and petrochemical plants. The waste contains dangerous levels of arsenic, fluorine, sulphate and usually a toxic cocktail of other chemicals. As well as affecting “cancer villages,” the chemicals are held responsible for the high rates of stomach and liver cancers countrywide.

Elizabeth Economy says the health of China’s two most iconic rivers is particularly worrying. The Yangtze River, stretching from Tibet right across China to Shanghai, receives 40 per cent of the country’s sewage, 80 per cent of it untreated. Meanwhile, the Yellow River, which provides water for 150 million people and 15 per cent of the country’s agricultural land, is so polluted that two-thirds of its water is unsafe to drink and 10 per cent of its contents are classified simply as “sewage.” Over one third of the fish species native to the Yellow River are extinct because of pollution.

The Beijing government is belatedly beginning to spend money on water conservation, treatment and pollution prevention, and moving supplies to the parts of the country where they are most needed.

China is also attempting to overcome its lack of water both for power generation and human and economic consumption by capturing rivers that flow into neighbouring countries. Beijing has embarked on projects on the Mekong, Brahmaputra and Irtyush rivers without consulting neighbours in Southeast, South and Central Asia, sparking outrage, anger and apprehension about China’s future behaviour.

China’s water use is thus not just a domestic issue, but one fostering international tensions.

Since 2010, Beijing’s spending on conservation has risen by about 50 per cent a year and stands at $77 billion this year. Beijing loves massive projects and a suitably enormous scheme is underway to transfer up to 20 per cent of the volume of the Yangtze River to water-starved northern China via three canals. About $80 billion has been spent on the scheme so far and by the time it is due to be completed in 2050 the bill is expected to be close to $500 billion.

The north, which includes half of China’s agricultural land, 40 per cent of its population, much of its heavy industry, and more than half the country’s GDP, is doubtless hoping that when the Yangtze water arrives it is not as toxic as it is now. In April this year, China’s State Council – equivalent of Canada’s cabinet – issued an “action plan” to control and prevent pollution. The plan includes a raft of economic, legislative and other measures. But at the hub is targeting fertiliser, metallurgy, pesticide and tanning factories and forcing them through threats of fines and closure of their businesses to stop disgorging pollutants into waterways.

One of China’s problems with water is that despite the scarcity of the commodity, it is unrealistically cheap, a leftover from centrally controlled Marxist economics. A 2011 report says water cost 46 cents a cubic meter at that time, compared with a global average of $2.03. At the end of this year Beijing plans to raise the price of water for domestic users and industries, expecting this will encourage more efficient use. But the government admits that exacting a realistic market price from farmers, by far the heaviest users of water, is going to be more difficult.

How successful these measures will be is questionable. One of China’s persistent problems on a number of fronts is that provincial and municipal officials often take little notice of the edicts flowing from Beijing.

*Vancouver: not mind-numbingly boring, but vacuously vain, by Jonathan Manthorpe, 2015