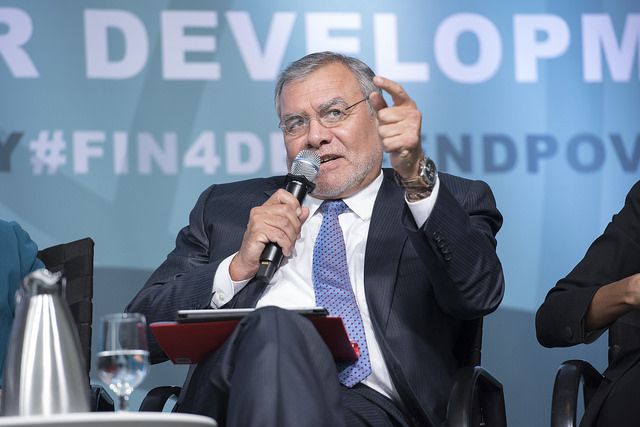 Carlos Ugaz, Chair of the Board of Directors, Transparency International, at a World Bank even in Washington, Ocotber 7, 2016. Photo: Clarissa Villondo/World Bank

There is a fine line between thinking the best of people, and being a sucker for every con artist, fraudster and runaway crook who comes along.

Canada all too often crosses that line without realising it. There is a blithe strain in Canadian culture that believes corruption is a foreign problem and that venal instincts magically vanish when exposed to Canadian values.

There was a fine example of this naivety on Friday when Foreign Affairs Minister Stephane Dion issued a statement to mark International Anti-Corruption Day. That it was the foreign affairs minister who issued the statement underlines the Canadian view that this is a foreign problem, not a domestic one.

And Dion’s statement went on to talk about the evils of corruption in foreign terms, apart from one pro-forma inclusion of the word “domestic” in a sub clause. The eradication of corruption, according to the Ottawa doctrine, is part of Canada’s mission to bring the country’s civic values to the less fortunate.

“Corruption is a major obstacle to sustainable development and is destructive in all its forms. Whether used to seek unfair advantage, evade justice, gain power or impose hardship, corruption leaves little room for democracy to flourish and economic growth to be inclusive.”

Well, all those evils are well established in Canada, as is made clear in a report published on Friday by Transparency International Canada.

Canada, says the report, has one of the worst records among the G20 organization of leading economies for providing a host of legal but immoral ways for people to launder ill-gotten gains, hide criminal activities, or spirit wealth away out of sight and reach of Revenue Canada.

Canada scores low on corruption globally, but lags within the G20 leading economies for providing a host of legal but immoral ways for people to launder ill-gotten gains, hide criminal activities, or spirit wealth away out of sight and reach of Revenue Canada. Above: Transparency International Perceptions Index 2015

The Transparency International Canada (TIC) report puts some emphasis on the fall-out from corrupt Chinese Communist Party officials, their relatives and friends taking advantage of the open door offered by the naïve Canadian market to park their money in Vancouver, Toronto and elsewhere. But that is almost in parenthesis in a catalogue of failings in Canadian management of financial dealings that is an open invitation to criminals and tax dodgers both domestic and foreign.

At the top of the list of evils identified by TIC is the secrecy and opportunities to hide identities in the Canadian system. The report details the extraordinary and destructive lack of regulation in Canadian institutions about who owns what.

“In Canada, more rigorous identity checks are done for individuals getting library cards than for those setting up companies,” says the TIC report. However, setting up companies is only one example of the ease with which people can hide their identities alone with their wealth.

Establishing a blind trust in Canada is easy and there are estimated to be many millions here. But there is no legal requirement to register trusts, file a record of their existence, say who the beneficial owners are, or disclose when a surrogate – usually a lawyer or family member – is acting on behalf of others when dealing with banks or other businesses.

Another favourite financial instrument for hiding ownership and dealings is shell companies. The TIC report describes shell companies as “financial getaway cars that can be used to enable criminals to vanish without a trace.”

The report sets out evidence that shell companies are used to facilitate corruption, launder the profits from crime, evade taxes, commit fraud such as Ponzi schemes, and provide cover for exploits such as insider trading and market manipulation.

Trusts and shell companies are also being used to profit from the real estate market in Vancouver, Toronto and other Canadian cities. Again, there is no requirement that the real owner of property be identified or that an open public record be kept.

“Individuals can use shell companies, trusts and nominees to hide their beneficial interest in Canadian real estate,” says the TIC report. The organization’s analysis of land title records found that nearly half of the 100 most valuable residential properties in Greater Vancouver are held through structures that hide the identities of the real owners.

“Nearly one-third of the properties are owned through shell companies, while at least 11 percent have a nominee listed in the title. Trusts are also common ownership structures for luxury properties.”

Of course, the use of numbered shell companies, usually lodged in tax havens such as the British Virgin Islands, or the Isle of Man, makes a nonsense of the much ballyhooed 15 per cent tax on foreign buyers of Vancouver property. If a property is owned by a shell company with a hidden beneficial owner, all a buyer has to do is purchase the shell company and no one is the wiser there has been a transaction.

It would not be surprising if the apparent downturn in foreign purchases of Vancouver properties since the tax was introduced is an illusion. The business could still be flying high, but is being done by the sale of numbered companies registered in tax havens under the names of nominees, and no one in Canada is any the wiser.

A key result of all this officially endorsed anonymity is that the RCMP and other enforcement agencies have next to no ability to detect and prosecute financial crimes.

“The RCMP’s success rate in pursuing money laundering is a fraction of what it is for other crimes,” says the TIC report. “A suspect cannot be identified in more than 80 percent of cases, and only a third of the cases that go to trial result in a conviction. The cost to the treasury in lost tax revenues … is likely to be in the billions of dollars.”

So the odds of being caught and convicted of a financial crime in Canada are as close to zero as makes no difference.

The key recommendation of the TIC report is to end the secrecy. All companies and trusts in Canada should be required to identify their beneficial owners. This information should be publicly available through a central registry.

Further recommendations are that nominees should be required to disclose when they are acting on their principal’s behalf and those beneficial owners should be identified.

Corporate registries should be given the resources and requirement to verify information filed by companies, including the identities of directors and shareholders.

Property titles should include the names of beneficial owners, and no property deal should be allowed to proceed without that disclosure.

It should be a federal regulation requiring all financial sector professionals – including real estate agents – to identify beneficial owners before conducting a transaction.

And any company seeking a government contract – from municipal to federal – should be required to disclose its beneficial ownership.

Regular readers will know that I have consistently argued that the most effective way of dealing with the problem of foreign investment inflating Canadian real estate prices is to keep publicly available records of beneficial property ownership.

The attraction of Vancouver for foreign buyers is not, as Vancouverites like to imagine, that it is reputed to be one of the world’s “best cities,” but that it offers absolute anonymity for the buyer. If public records of beneficial ownership were available to the Mounties, Revenue Canada, and especially the Chinese Communist Party’s Central Commission for Discipline Inspection – beside which the Spanish Inquisition was a sympathetic guidance counsellor – the problem of prices inflated by foreign buyers would end overnight.

But TIC is not optimistic. “While the world’s leading economies move toward greater transparency, Canada seems to be dragging its feet,” says the report. “The government has taken very few concrete steps, despite making strong commitments at high-profile events including recent G8 and G20 summits.”

At a G20 summit late in 2014, the Canadian government said it would adopt 10 measures to ensure transparency of beneficial ownership. All Ottawa has actually done is to conduct a risk assessment of such a move, and that assessment was completed early last year.

The government’s only step so far into ending Canada’s dangerous liking for financial anonymity has been to propose amendments to the Canadian Business Corporations Act to eliminate bearer shares. These are unregistered securities that are owned and redeemable by whoever has them in their hands at that moment. They are an obvious godsend for money laundering, the financing of terrorism, drug trafficking, or any other trans-boundary crime that can be thought of. Most other sophisticated economies, and even several tax havens, have already outlawed bearer shares.

Ottawa does not yet seem to have grasped the broader political context of the problem of hidden and unaccountable wealth.

These dodgy tricks, such as blind trusts, shell companies and anonymous accounts in tax havens, used by the wealthy and criminal classes to hide their fortunes are a key part of the perception of growing inequality that is spurring what is known as populist politics. They are part of the cause of the anger that is putting Donald Trump in the White House, is taking Britain out of the European Union, and is feeding the rise of demagogues throughout Europe and elsewhere.

Anger at the growing disparity between the grossly rich and the rest is not as evident in Canada as it is in fellow countries of North Atlantic basin culture. At least, not yet. But unless Ottawa moves to ensure that Canada’s privileged classes play by the same rules as everyone else, Canada will inevitably be hit by the same tide of outrage.

Vancouver’s grossly inflated housing market, the United Nations’ climate conference in Paris and China’s catastrophic environmental degradation are all linked in a circle of cause and effect.