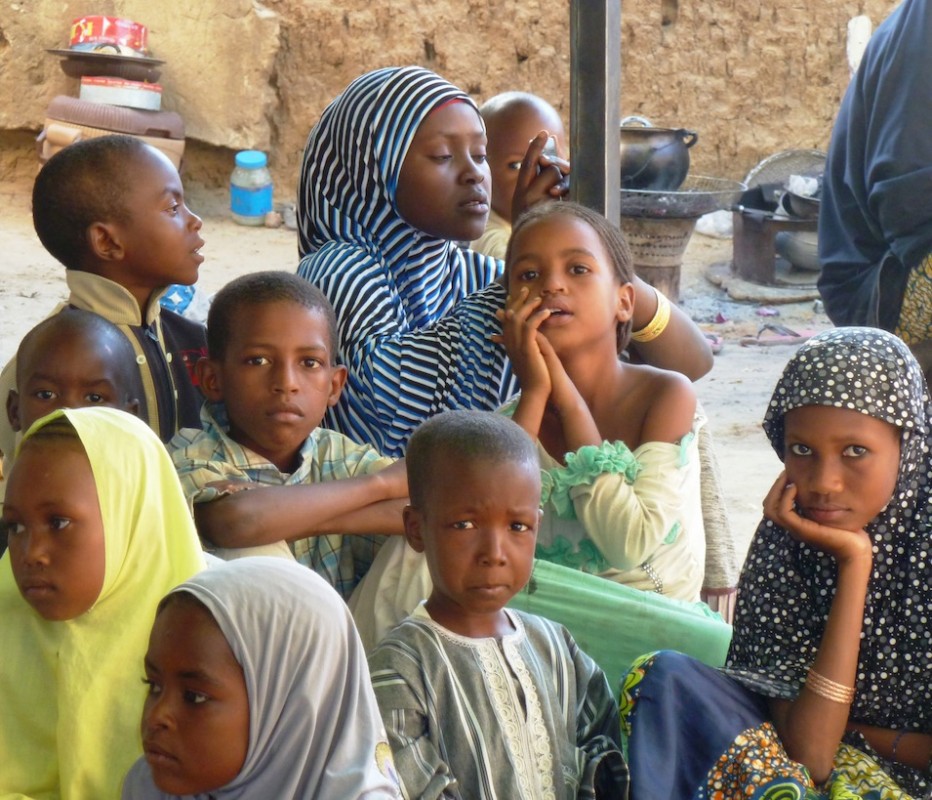 Early December, in a refugee camp in Niger, young Nigerians sat still long enough to create a visual record of Boko Haram mastery of their natal geography and international efforts to mitigate their circumstances. Wim Fransen is the photographer; he’s the director, for Niger, of the European Commission humanitarian aid and civil protection department.

Reports from the Nigerian military that they have launched a major offensive against Boko Haram, killed 300 of the group’s fighters and recaptured 11 towns and villages should be treated with skepticism and caution.

It is largely because of the ineptitude, ill-discipline and corrupt culture of the Nigerian army over the past six years that the militant Islamists of Boko Haram have managed to grab control of three states in northeastern Nigeria, kill thousands of people and displace another estimated one million. Over that time the army’s public statements have grossly exaggerated its efforts and successes against Boko Haram, when its greatest skills have been either to stay firmly in barracks or to run away.

The one reason to withhold judgment on the army’s claims until independent observers get to see the situation on the ground is that Nigeria is no longer fighting Boko Haram alone. Neighbouring Chad, Cameroon, Benin and Niger, which have also been targets of Boko Haram’s ambitions, have joined the Nigerian forces in this offensive. And the whole operation has a strong smell of the United States orchestrating the operation from behind the scenes. There are credible reports from the region of Washington supplying intelligence and equipment to the five national forces.

Washington is engaged in a whack-a-mole operation against the Islamic State group (ISG), whose capture of territory in the Syria-Iraq border region and declaration of a Muslim Caliphate is attracting support from extremists across North Africa, in Egypt’s Sinai Peninsula and across the Middle East to Afghanistan.

Boko Haram has as yet not vowed loyalty to ISG. But the Nigerian group is clearly at the same end of the spectrum of Islamic barbarity as ISG, and in the last few weeks its videos and other propaganda material have clear signs of being influenced by ISG’s material.

But in Nigeria, Africa’s most populous and wealthiest country with 174 million people and an annual gross domestic product of $500 billion, the air is thick with speculation that the army’s foray against Boko Haram is either the prelude to a military coup or some other attack on Nigeria’s 16 years of functional democracy.

Presidential elections were due to be held last weekend, Feb. 14, with incumbent Goodluck Jonathan running for re-election against former military dictator Muhammadu Buhari, whom he defeated in the 2011 election. But after much scrambling to find a credible excuse, the elections were delayed until March 28.

With polls showing that Buhari would defeat Jonathan in a reasonably fair vote, the president’s security advisor, Sambo Dasuki, for several weeks had been publicly arguing for a delay. His argument was that too many people had failed to collect their voter cards for the election to be credible. But the Independent National Election Commission (INEC), which has acquired a reputation for independence and probity, flatly rejected that idea.

Jonathan then wheeled out his national security agency, which issued a letter countersigned by several military chiefs, saying security around the election could not be guaranteed because of the pending offensive against Boko Haram. It is usual in Nigerian elections for thousands of soldiers to be deployed to keep the peace on voting day in a country with sharp divisions between the Muslim north and Christian and animist south, and between tribes and regions. Modern Nigeria was formed under British colonial rule from at least six African kingdoms and many of those ancient identities remain strong.

Even though the country-wide level of security has not deteriorated markedly, this argument boxed the election commission’s Attahiru Jega into a corner. He had no option but to agree to reschedule the election for March 28.

But this decision has created a great deal of uncertainty, and the prospect of a further postponement if, for example, the planned six-week offensive against Boko Haram continues beyond that timeline. It is not at all clear what the administration considers will constitute a victory over Boko Haram and, therefore, a level of security that will allow the elections to go ahead. So there’s a lot of speculation that this postponement is only the overture to another delay. But Goodluck Jonathan’s current term expires on May 28, and therefore April 28 is the last date when elections can be held within the current constitutional limits. To delay beyond that, President Jonathan would have to declare a state of emergency.

Since independence from Britain in 1960, Nigeria has had only fitful opportunities to get used to the joys of democracy. There have been seven military coups and military regimes. Only between 1979 and 1983, and now since 1999 have Nigerians had democratically elected governments.

One of the results of this is something that makes elected leaders in neophyte democracies, as well as full-fledged dictators, uneasy on their thrones and determined to hold on to power. They fear reprisals by their opponents, or the populous or the International Criminal Court or all of the above if they are toppled.

Goodluck Jonathan is showing the classic signs of a man uneasy that his sins will come back to haunt him and, if defeated in the election, he will not be allowed a graceful exit into a secure and well-financed retirement.

In the pantheon of Nigerian leaders, Jonathan is not as spectacularly bad as some of his predecessors. But very many of the voters find it unacceptable that there is high unemployment despite the country’s massive oil wealth. There is outrage that far too much of that wealth seems to disappear into the pockets of Jonathan, his cronies and the military leaders he has brought into the administration. The picture of the generals bellying up to the patronage trough while Boko Haram runs riot across the northeast, capturing towns and villages, slaughtering local people and kidnapping schoolgirls to become slave concubines does not go down well.

Key figures in Jonathan’s People’s Democratic Party (PDP) have become disenchanted with the president and defected to the opposition All Progressives Congress (APC). Among those are former vice-president Atiku Abubakar and five state governors. Jonathan has also been publicly criticized by former general and president Olusegun Obasanjo, who has the distinction of having, after launching a military coup, resigned in favour of a civilian government. Obasanjo is also one of Africa’s few elder statesmen whose reputation for sagacity and sound civic values stretches beyond the continent’s shores.

Despite having the wind beneath his wings, APC leader Buhari has some major problems to overcome before he can be sure his campaign will get insurmountable altitude. Much of his early military career was not in professional soldiering, but playing bit parts in other people’s coups. It was not until December, 1983, as the commanding officer of the Third Armoured Division, that Gen. Buhari got to launch his own coup, and overthrow a democratically elected government.

Buhari’s regime was fairly short-lived. He was overthrown by a counter-coup launched by Gen. Ibrahim Babangida in August, 1985. But in just over a year-and-a-half Buhari managed to chalk up an impressive record of human rights abuses. He gave unprecedented powers to the National Security Organization. And, as always, whenever secret policemen are given room to move, they always more than fill the space. The secret policemen started by using their enlarged powers to detain, intimidate and harass anyone considered a dissenter as well as labour union strikers. Then, when Buhari issued the Protection Against False Accusations Decree, the secret policemen went to work on artists, journalists and publishers. Before he was ousted, Buhari launched a campaign to expel foreigners and migrant workers from neighbouring countries. About 700,000 people were pushed over the borders, with devastating results. The influx of people without jobs in Niger led to a famine, which is called El Buhari.

Buhari, from the Muslim north of Nigeria, is also remembered for his attempts to instil a sense of public morality. Soldiers with whips were stationed at bus stops to beat commuters who didn’t line up in an orderly fashion. Students over age 17 caught cheating in exams faced prison sentences of up to 21 years.

Since being ousted and spending three years in detention, Buhari has attempted to cast himself as a born-again democrat. He has run for president four times, always unsuccessfully. This try looks more promising.

As well as benefiting from Jonathan’s shrivelling popularity, Buhari has employed a public relations company to remake his image as an honest and dedicated reformer. Some of the moves have been smart. As a Muslim, Buhari has got northern Nigeria sown up. In order to try to make a breakthrough in the Christian and animist south, Buhari has drafted an evangelical Christian, Prof. Yemi Osinbajo, as his running mate. This, together with the nine states in the south now held by APC administrations, make Buhari’s prospects look good.

He has also gone out of his way to try to reassure the generals around President Jonathan that they need not fear a change of government. In an interview with Al-Jazeera on Feb. 8, Buhari explicitly reassured people suspected of corruption during Jonathan’s rule, which includes all the top generals, that they will not be at risk of prosecution if he comes to power.