It is now pretty clear that when Shinzo Abe rushed to meet Donald Trump, even while the votes were being counted in November, the Japanese Prime Minister didn’t have a Margaret Thatcher or George W Bush moment.

After Thatcher met then-Russian President Mikhail Gorbachev in 1984 she said to a BBC interviewer: “I like Mr. Gorbachev. We can do business together.” 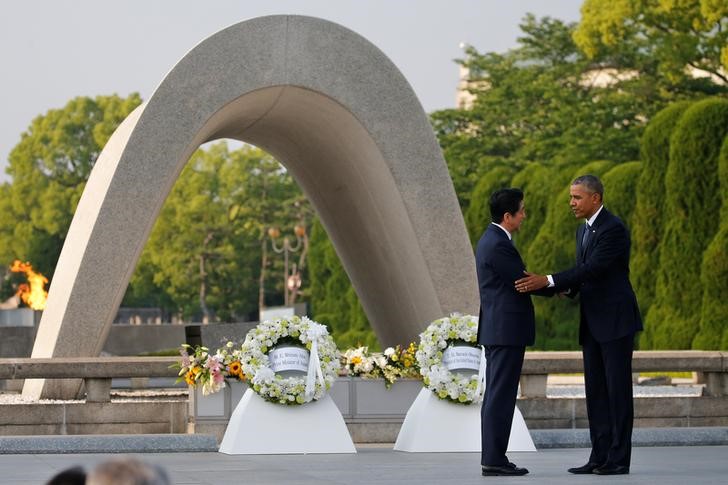 Shinzo Abe’s actions since the U.S. election suggest he has little or no faith in Donald Trump’s capacity to be President of the United States, writes Manthorpe. Above, U.S. President Barack Obama (R) puts his arm around the Japanese Prime Minister after they laid wreaths in front of a cenotaph at Hiroshima Peace Memorial Park in Hiroshima, Japan May 27, 2016. REUTERS/Carlos Barria

And after the junior Bush met Russia’s new President Vladimir Putin in 2001 he remarked: “I looked the man in the eye. I found him to be very straightforward and trustworthy.”

Well, we now know that Bush was easily conned by Putin, and there’s good reason to think that Trump, who also waxes lyrical about the vulpine Russian leader’s soul, is also being played for a sucker. But let’s leave that aside.

Abe has reacted with what can only be called horror at what he saw in Trump’s eyes during their hastily arranged 90-minute meeting on November 17 in the President Elect’s New York penthouse.

For sure, after the meeting Abe spouted the usual verbiage in these situations. “The talks made me feel sure that we can build a relationship of trust,” he said. But in the six weeks since, all Abe’s actions suggest he has little or no faith in Trump’s capacity to be President of the United States, or that Trump will be trustworthy for even five minutes.

Abe has been scouting in all directions to strengthen other alliances among Japan’s Asian neighbours, and even Russia. Although Moscow and Tokyo have yet to resolve territorial disputes left over from the Second World War, Japan is a major investor in the industrial development of the sparsely-populated Russian Far East. And both countries are deeply suspicious about the power ambitions of the current regime in Beijing.

Having a trustworthy President in the White House matters to Japan more than many other countries. For nearly 70 years the U.S. has been Tokyo’s firm ally and the guarantor of Japanese security in a very dangerous neighbourhood.

That alliance has become more significant and important in recent years. The immediate threats to Japan in particular, but other U.S. Asian allies too, are the rogue North Korean regime with its nuclear weapons and missiles, and China’s emergence as an expansionist fascist state.

On several occasions North Korea has underlined the threat it represents by test firing unarmed missiles over Japanese territory. After some fumblings and setbacks, Pyongyang now seems to be close to being able to make a nuclear weapon small enough to mount on an intercontinental ballistic missile.

Meanwhile, the Beijing regime of President and Communist Party boss Xi Jinping has moved on from claiming Japan’s Senkaku Islands, into whose territorial waters and airspace its ships and warplanes regularly intrude. Beijing has now promoted claims to Japan’s Ryukyu Islands chain, which includes Okinawa, home to the base for over half the 54,000 US military personnel stationed in Japan.

Japan’s Ryukyu Islands chain, also called the Nansei Islands, are on the boundary of the East China Sea and the Philippines Sea. Creative Commons/Wikipedia

Beijing is even attempting to create a political split within Japan by supporting and cultivating independence activists among the people of Okinawa and the Ryukyu Islands. In a statement last week, Japan’s Public Security Intelligence Agency said it is closely watching the activities of Beijing’s agents of influence – principally academics from Chinese universities and think tanks – on the Ryukyus.

This latest slice in Beijing’s salami tactics comes as it has crowned its 20-year campaign to exclusive sovereignty over most of the South China Sea, by building seven military bases on islands in the sea and taking effective control over seaways that carry a third of all maritime trade.

Japan has responded to Beijing’s evident lust for the Ryukyus by fortifying 200 of the islands, which stretch in a 1000-kilomtre-long chain south-west from Japan’s main islands. As well as defending Japanese territory, the fortifications are intended to keep control of one of the main passages into the Pacific Ocean for China’s new and modern navy, which now includes an aircraft carrier and the world’s largest submarine fleet.

Japan is a much tougher nut for Beijing to crack than the squabbling littoral nations of the South China Sea. But the severing or weakening of the strong political and military links between Washington and Tokyo works only in Beijing’s favour.

So Trump’s questioning during the presidential campaign of the value-for-money Washington gets from its Asian alliances, and suggestion that Japan and South Korea should acquire their own nuclear deterrents, came at a tender moment. Trump’s off-hand attitude towards Washington’s Asian alliances conforms to his often crudely expressed disdain for most other U.S. treaty-backed friendships and the international institutions that have underpinned global security and development since the Second World War.

Uncertainty about Trump comes at a time when Abe, with the quiet backing of the Barack Obama administration, has already started to remove the pacifist constraints on Tokyo’s uses of its military that are embedded in Japan’s constitution.

Abe and many of his supporters feel that the time has come when these limitations, imposed by occupying U.S. forces after 1945, should be removed. Under the U.S.-drafted constitution Japan’s forces can only be used to defend against an attack on Japanese territory. This constraint has prevented Japan from being a full partner in operations with allies in such places as Afghanistan and Iraq, as well as in United Nations peacekeeping operations.

With about half of Japan’s population supporting pacifism, attempting to amend the constitution would be a politically dangerous reach for Abe. So he has “reinterpreted” the constitution instead. His main aim has been to provide a legal framework for the Japanese military to use force to protect allies and thus become a reliable partner. That has been achieved. In November, Japanese troops were deployed on a peacekeeping mission in South Sudan with permission to use lethal force if necessary to protect United Nations and other aid workers.

Abe is also moving to convince countries among the 10 nations of Southeast Asia that Japan is a reliable partner in the growing confrontation with China over power and sovereignty in the region. In the middle of December, Tokyo made a significant advance with the creation of a joint maritime forum with Indonesia, the largest and potentially most influential of the Southeast Asian Nations.

Under the agreement, Tokyo will support Jakarta’s efforts to protect the maritime sovereignty of its archipelago of over 17,000 islands. Japan will help Indonesia enhance its maritime security, as well as assisting in the development of ports, other maritime infrastructure and the economic development of outlying islands. This is a strong pre-emptive move against Beijing. The Chinese regime doesn’t claim any Indonesian maritime territory at the moment. But Chinese fishing boats, many of which act also act as seagoing “militia” for Beijing, regularly poach in Indonesian waters. And China’s navy has sent warships to areas hard up against Indonesia’s massive Natuna submarine natural gas fields.

Abe appears to have been less successful in his overtures to Putin. The Russian President visited Japan in mid-December, but the talks didn’t lead to a breakthrough in relations that many Japanese observers had expected.

That’s not entirely surprising. The major bone of contention for decades between Moscow and Tokyo has been the fate of the Kuril Islands, which the Japanese call the Northern Territories. These Japanese islands were occupied by what was then the Soviet Union in the final weeks of the Second World War, and have been held and administered by Moscow since.

The dispute has blocked Tokyo and Moscow from signing a peace agreement formally ending their conflict in the Second World War. The next opportunity for a resolution is when Abe visits Russia early in 2017, but a major breakthrough remains unlikely. Putin has hinged a great deal of his political credibility on regaining and holding territory and influence Moscow lost with the collapse of the Soviet Union 25 years ago. His impetus is to grab territory like Crimea, eastern Ukraine, and enclaves in Georgia and Moldova.

Ceding territory is not Putin’s style, and even suggestions for joint Tokyo-Moscow economic management over some of the disputed Kuril Islands will be difficult to seat comfortably with the Russian leader’s prickly self-esteem.

However, apart from the Kurils, Moscow and Tokyo have significant common interests. Both worry about Beijing’s expansionism, which for Moscow is seeing a flood of illegal Chinese immigrants into the Russian Far East. At the same time, there is an exodus of Russians from the region to the country’s west in search of jobs.

Japan is a major partner with Moscow in trying to reverse this flow. Japanese banks are putting up money for investment in resource development in the Russian Far East, and Japanese industrial conglomerates producing everything from cars and trucks to medical equipment and pharmaceuticals are establishing manufacturing plants in the region.

Even so, there would be a delicious irony if Japan were driven out of the arms of Trump and into the arms of Putin because of Abe’s suspicions about the reliability of the man who U.S. intelligence agencies unanimously believe was helped into the Oval Office by Putin’s spy agencies.