My wife and I like to watch British mystery shows, notably those shown on PBS. A couple of them, the ‘Inspector Lewis’ series and the ‘Vera’ series, have featured female police officers in senior positions. Invariably, the subordinate officers respond to their advice and orders with the response of, ‘Yes Ma’am’.

Maybe we’d better start getting used to this in North America, once Hillary Clinton takes office. With the exception of Kim Campbell in Canada for a few months twenty-odd years ago, neither country has had a female national leader. At the State and Provincial level, yes, but not nationally.

‘Yes, sir’ obviously won’t do, nor will ‘Madam President’, except on formal occasions. The military probably already have figured this nomenclature out, but it is new to us in the street. 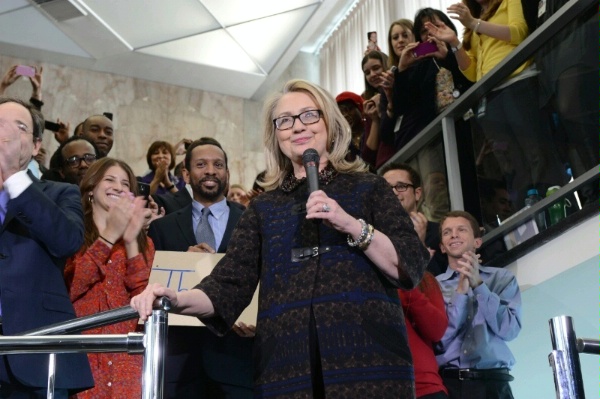 Some of the pundits during the campaign have noted that she is probably the best-prepared and most experienced Presidential candidate ever. She has been through so much, she’s imperturbable and she appears to be as tough as nails. ‘Yes, Ma’am’ fits. Do what she tells you, because she’s been through it all and knows what works. That goes for foreign powers as well as domestic politicians.

Over the past few months, she has had the guts to not pull away from the Obama record, in spite of the, dare I say it, ‘old wives’ tale that embracing a third term is a recipe for disaster. She has had the sense in this campaign to adopt a broad platform, taking things from the Sanders run. She has had the confidence to co-opt (as far as we can tell from outside) the slick Obama campaign machine. It seems that ignoring Ma’am’s advice might be a career-shortening move, in domestic and foreign spheres alike.

Facing her in the Congress is likely to be a bunch of groups prepared neither to cooperate with her or with each other. If the Senate is evenly split, the Vice-President will have the deciding vote in that body, so Kaine will have plenty to do over there, which may deprive Ma’am from the kind of help Biden gave Obama. At the same time Ma’am will have lots more foreign policy experience on her own than Obama had when he came to office and Biden was the foreign expert.

The House of Representatives will likely remain in Republican hands, but with a narrower majority. It will be a mess. Whatever seats the Republicans might lose would probably come from the more moderate, urban and suburban, side of the party, while the hardliners from ‘safe seats’ will find their relative influence in the caucus expanded. Do they compromise with the moderates, or not, and help to govern the country after the failure of their obstructionism of the past 6 years. Einstein once said that to try the same thing over and over again and expecting a different result is madness. We’ll see. She’s dealt with one odd, crazy guy pretty well.

If not, will the moderates, seeing themselves as the only Republicans who have any chance of restoring the party’s glory, cooperate with the Democratic minority to begin to repair the awful damage caused by the campaign? Time and the aging/passing of the Republican Baby-Boomers might present them with a new, positive scenario. At the same time, it may take a very long time, as the literal complexion of the electorate continues to change, away from the white, male voter.

The most interesting challenge for Ma’am will be in foreign affairs, though that is a part of her experience. The bipolar world that lasted until 1990 morphed into a unipolar world that lasted only 11 years, until 9/11. Today, after a decade and a half of low-level, high publicity, asymmetrical warfare, America has succeeded in focusing its attention so much on ‘terrorism’ that it has forfeited much of its advantages relative to the growing powers in South and East Asia. Today, there is no ‘pole’ in the world. The US has 5% of the world’s population, 25% of its economy and somewhat over half of the combined military power on the planet. Most of this power is not effective in fighting asymmetric warfare. Obama used a kind of stiletto to some effect, and for us taking out the ‘bad guys’ like ISIS may be satisfying, but really just spreads the trouble around. The challenge for Ma’am is to figure out how to stop forms of asymmetrical warfare.

On the domestic front, even the most passionate defenders of Obamacare never felt that the legislation was perfect from the get-go, and its deficiencies have begun to make themselves obvious. The health system has to deal with its financial shortcomings, its desire to hold onto the hospital/ factory model of care and the desire of a lot of professionals to build licensing walls around their jobs. The insurance model based on private providers seems like a stitched-together mess. Ma’am was heavily involved in the first attempt to develop a comprehensive system, and may be able to get reforms passed, but they will be piecemeal and the task won’t be completed before she leaves office.

On trade and the economy, Ma’am will have to seek good counsel. There may be a lot of pressure to build walls, or at least not tear them down, but there is a world system in place that has led to a large number of global companies, many of whom are based in America. After all, walls don’t just keep people and companies out; they keep them in.

Some global companies are actually doing more in the US than are US companies. An example is Toyota, who source more of their car parts inside the country than do the so-called American brands. This year, American companies manufactured more by value than at any time in history, but they did it with less workers. This is called technology/automation and is the same thing farmers in the US suffered from 1900 until after the Second World War. Transitioning displaced workers is a difficult challenge in the best of times, but when it is dependent on a do-nothing Congress, it is impossible.

There is always the danger of one campaign absorbing some of the policy stances of its opponent. Trade is a dangerous one to play with, because there are so many myths, misunderstandings and interconnections. The British are beginning to discover this as they try to figure out how to do their Brexit. Like a marriage, getting out of a situation is harder than getting into it in the first place. It can also leave you good and broke.

So, I am going to return to those British mysteries we saved up on our DVR because the campaign circus monopolized our attention for so long. Sometime in January or February, we’ll start to see another mystery. How will ‘Ma’am’ get along with the new people inhabiting Washington DC? Good luck to her with her 4-year contract as the star of the show. It is renewable if the ratings hold up.