Why Does America’s President Bother with Russia? 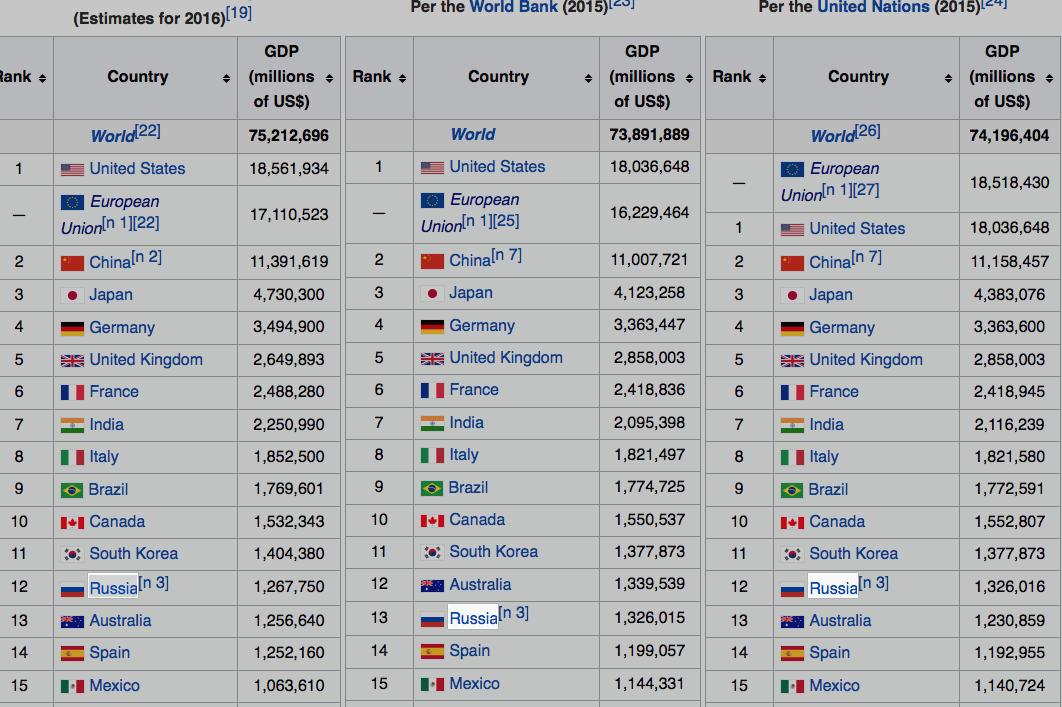 Like a lot of people in North America and Europe, I lived through years and years of paying attention to the Soviet Union, and later, Russia. It always seemed to me that this huge country, with the largest land area in the world, and possessor of nuclear weapons, was and is engaged in a more or less evenly-matched competition with the US and with Europe. I took for granted that Russia had a big economy to (sort of) go along with their big land mass. But then, a month or so ago, I ran across a visual diagram of the world’s economies on The Visual Capitalist. (1)

The founder and editor of this website, Jeff Fairbanks, took some data from one of the international agencies and turned it into a visual that compared the relative size of the world’s economies. Startling stuff, when shown this way.

Now, there are a lot of countries that have nukes, such as North Korea, Pakistan, India, France and China, yet these seem benign or very far away, so we pay little attention to them, except perhaps for the publicity-seeking North Koreans. Russia has always seemed close and antagonistic. Yet, other than the fact they are in the ‘nuclear club’, do the Russians deserve the attention they get? Yes, they have meddled in some of their much weaker neighbors and bit off small pieces of land, but the Chinese are eating their lunch in the former eastern Soviet Asian Republics, the ‘Stans’ as they are called. The Russians also sent their only aircraft carrier around to the eastern Mediterranean to launch planes at Syrian rebels who had no anti-aircraft capability. Do these compare with the Soviet threat that launched the Marshall Plan and NATO? I don’t think so.

What the Visual Capitalist diagram showed is that almost a quarter of the world’s GDP is generated by the US. Canada is good for 2.09% and Mexico 1.54%. Russia comes in at 1.8%, right up there with Australia. Australia!! Mexico?? Where’s the Canadian aircraft carrier? Why hasn’t Mexico invaded Belize or Guatemala recently?

Also, how can Russia have all these billionaire ‘oligarchs’ with an economy so small? Mexico has Carlos Slim and maybe one or two drug lords, but that seems small potatoes by comparison. Anyway, how does having these oligarchs buying up properties in Florida or London help the Russian economy? Who’s paying to run that aircraft carrier?

Today, the Russian economy is not exactly a powerhouse. The population has been declining to stagnant and is aging. The main Russian export has been oil and gas, but the drop in world oil prices from $100 per bbl. to $40-$50 was a real body blow. They do have a lot of computer engineers, but they seem to be misplaced, hacking US Democratic Party emails and data rather than producing neat stuff to sell to the world economy instead of all that cheap oil. My guess is that the US has more, and more sophisticated, techies than Russia and that the Russian activity around the US election is no more than another one-off surprise attack like Pearl Harbor or 9/11. Very effective — once, but it is not a wise idea in the long run to get those trusting Yankees seriously aggravated. American hackers invented this game of messing around with somebody else’s software in Iran over a decade ago. It may take a couple of years, but I anticipate nothing good for Russian software infrastructure happening after then.

Of course, the US has an Administration now with a lot of Russian ties, and it remains to be seen whether the nature of their ties is strong enough to cause its downfall. Given the latent American anti-Soviet fears and the unpopular strident anti-globalization of the President, his desire for some kind of rapprochement with Russia seems to be endangered. Many people are puzzled by it and wonder if the President sees himself as a kind of an American Putin.

Parts of the ill-coordinated Administration are overtly hostile to Russia, while the Senate, especially, is engaged in an investigation of Americans with business or political ties to Russia and the FBI has been on the trail of the Russian hackers for most of the past year. The whole thing is taking on the cast of the Watergate mess of 40 years ago. Like then, the scandal is starting to overshadow the policy initiatives of the Administration. Congress has problems in getting anything of substance passed and the simple slogans of the campaign are running into the complicated details in their realization. Maybe a rethink is in order.

If the Russian economy is barely larger than Mexico’s and smaller than Canada’s, then why not pivot back to North America? The Russians can’t offer an import market like Mexico can. Check the stats…. Canada has as much oil as Russia and it does not have a history of beating up its smaller neighbors, like Danish Greenland. Spanish is easier to learn than Russian. There is also the benefit that Canadian and Mexican ties are more palatable to Americans, since nearly half of them live within a couple of hundred miles of these countries.

Someone who can habitually deny tomorrow what he said yesterday, ought to be able to just deny a couple of more promises and assurances. This is the President who promoted a health-care bill that would hurt the very people he promised would be given better care than they have with Obamacare. He promised he would build an Israeli-style wall across the desert southwest, when it has become apparent it will be both costly and ineffective (Drones can fly over it, etc.) and is located just where most illegals do not come (They fly in to US airports and disappear.). He ought to find it easy to pivot away from Moscow, unless there are some personal entanglements we still know nothing about..

Turning his back on Russia sure would go a long way toward easing a lot of tensions inside the country. Getting friendlier with Canada and Mexico could help remake him from the pro-Russian Grinch into a pleasant grandfather figure, no matter how improbable that may seem right now.

Facts and Opinions, employee-owned, survives only on an honour system: please chip in (at least .27 per piece) or make a sustaining donation. Details.