Why Celebrate July Fourth, or First? 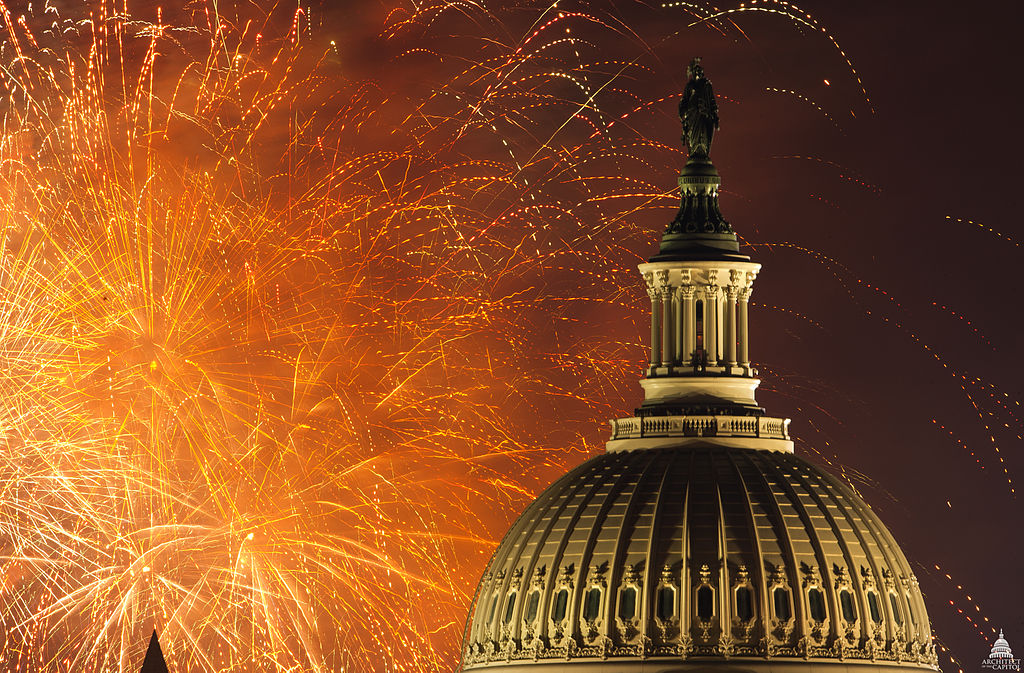 Washington lit up by fireworks on July 4, 2012. Photo by Architect of the Capitol, US government, public domain.

Every American knows, or should know, that the 4th of July marks the birthday of the United States. But the reality is different, as it is in many or most countries, and the actual beginning of the country is more complex and confused.

The members of the Congress who met in Philadelphia decided on July 2, 1776 that the Colonies that were along the Atlantic coast should become independent, except for those from one of them. The delegates spent the next 2 days discussing the details of draft Declaration, mainly written by Thomas Jefferson. Most liked it, and this draft was approved by them on July 4. It then took some weeks to get a good parchment copy made for signing and even then, the delegates having gone home, some were not able to get to a place where they could sign it.

These delegates did not have the power to commit their home governments. They still had to go back and get their assent. That process began in August and was not finished until December 2. The British refused to recognize the declaration as having any legal force, and it took until 1781 before the British military gave up its efforts to subdue the new country, and it was truly independent.

So, why July 4? I’d guess, if you wanted a national holiday, one celebrating a document with symbolic importance, and inspirational to boot, July 4 would more than do.

Actually, Independence Day was not really an official holiday for the federal government until 1870. Various States had made it a holiday well before then, with Massachusetts being the first in 1781. It was first celebrated with fireworks and parades in Philadelphia in 1777, even though the British invasion forces were landing in Long Island and would, a couple of months later, occupy Philadelphia itself.

There was even a partisan contest for the ‘real’ date of Independence. The ringing words of the Declaration made for nice sentiments, the early Federalist partisans said, but it was General Washington who made the country a reality. If anything, the reality should take precedence over sentiment, so the real holiday ought to be Washington’s Birthday, which came in February, not July. Their Democratic opponents, led by Jefferson, disagreed. With the fading away of the Federalist Party after the election of 1800, Independence Day regained its luster.

Celebrations mixed patriotism with romance. In 1842, William Nowlin, the 20-year-old son of one of Dearborn Michigan’s earliest settlers, set off with his sister and a neighboring young woman, somewhat later to become his wife, to see the Independence Day celebrations in nearby Detroit.

He wrote many years later: ‘So when the morning of the ‘Fourth’ came, we started for town. We put up at the ‘Eagle Tavern’ on Woodbridge Street [in Detroit] and spent the day very patriotically … We visited all the sights we could hear of, and honored almost every display with our presence. When the salute of the day was fired, of course, we were there; they fired one big gun for Michigan. As the cannon thundered forth its fire and smoke, it seemed fairly to sweep the street with its tremendous force; it was terrible and grand….We thought we would go over to [Windsor] Canada to see what was going on there. When we were across [the Detroit River] we observed that the people didn’t seem to be paying attention to the ‘Fourth’. Of course, I was seeing all I could of Canada, but Miss Traviss took the greater part of my attention.’

After the Civil War, July 4th holiday celebrations were used by the federal government as a device for reconciling the people of the South to the American national tradition once again. Gradually, Confederate veterans were included in Independence Day parades and other celebrations.

One would have thought that the Confederacy would have adopted some kind of holiday to celebrate its ‘independence’, but it did not. There never was a Confederate ‘Jefferson’ to write a stirring document that rationalized Secession. As well the existence of the Confederacy was so short as to make any such memorializing tradition abortive.

Some Southern women’s groups created a Confederate Memorial Day in the late 1860s to honor its fallen soldiers. Then, the idea was appropriated by the North for the whole country, with Waterloo, NY, eventually acknowledged as its ‘birthplace’.

Also, Gen. Washington’s Birthday became a holiday. It was awkward to have this day move around the week with the vagaries of the calendar, so his ‘birthday’ was fixed for the third Monday in February. Close enough. Then, somebody suggested adding Lincoln, and eventually Washington’s birthday became Presidents’ Day.

July 1, Canada Day, has become the equivalent of America’s Independence Day in 1867, as it was the date that British legislation creating a Confederation of 4 (now 10) Provinces came into force. Canada was self-governing, with the British continuing to control foreign policy for some decades. Later events, including the patriation of the Constitution in 1981, were subsumed into this holiday. Victoria Day, (a kind of Presidents’ Day), honoring the birthday of the great 19th Century British Queen, is fixed on the Monday before the Monday in May when Americans celebrate Memorial Day.

Canada’s equivalent of Memorial Day is November 11, the day when World War I ended. Small artificial red ‘poppies’ distributed by veterans’ groups are seen pinned to politicians and citizens alike on that day. The US celebrates Veterans’ Day on November 11, but it receives less attention than does the Canadian holiday on that date, likely because American participation in World War I was shorter and less traumatic than was that of Canada.

Just to complicate things further, Canada’s Thanksgiving comes in mid-October, when the harvesting is generally done. Most Americans think that their Thanksgiving is for the same reason, but the end of November is pretty late for a harvest feast. Actually President Lincoln suggested having a late-November Thanksgiving for Union victories during the Civil War. The rationale for the celebration was pushed over onto the Pilgrims and turkeys a lot later, by FDR in the 1930s, even though the Pilgrims did their actual feasting in October.

Such patriotic holidays are symbols that help to bind a people together. Connecting dates to events doesn’t really matter all that much.