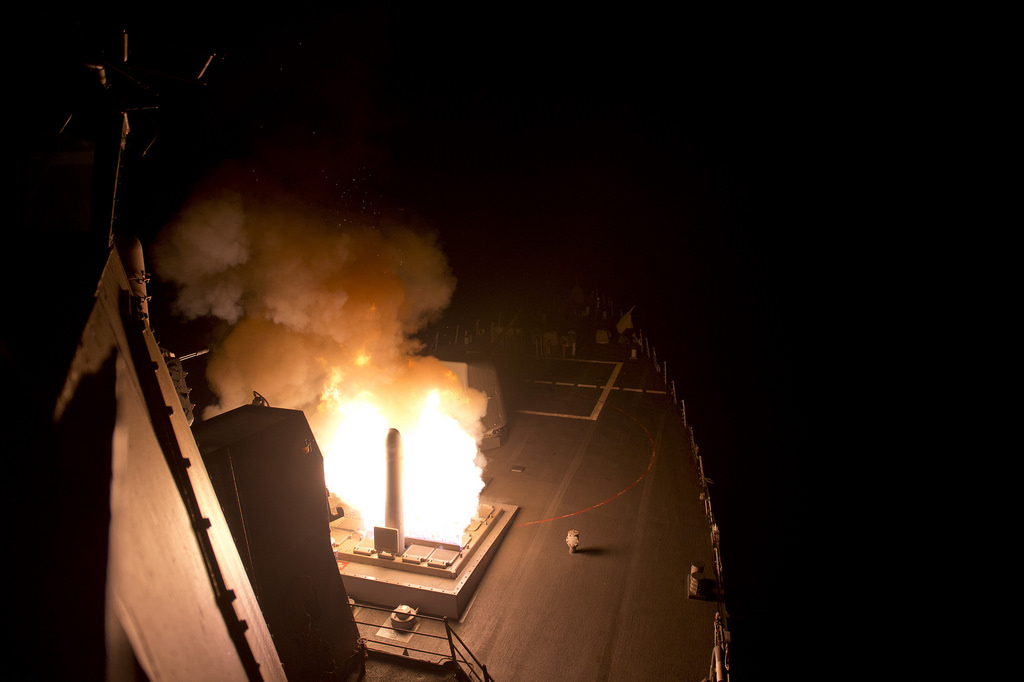 Among the 21st century weaponry the American military is deploying against columnist Jim McNiven’s “eighth century caliphate” is the Tomahawk cruise missile. This one was launched Sept. 23 from an American warship on station in the Persian Gulf. U.S. Navy photo

The popular media, always looking for the next big thing, has fastened upon the swift victories and social media brutalities of the group calling itself Islamic State.1 The various media have portrayed the organization as a worldwide threat and a number of governments have organized themselves to deal with it, led by the United States.

You have to read between the lines on this one. First, this terrible threatening force is actually weaker than the Taliban force that was over-running Afghanistan in 2002. That push ended when a few American spotters on the ground called in coordinates for bomber strikes. Deserts are unlike Vietnam: there is no jungle canopy to hide in. Very quickly, the Taliban were back in their mountains where they have mostly been ever since.

ISIS, or IS, is also in the desert and, to my knowledge, has no air capability. You may have noticed that the ISIS advance did not hold up any better than the Taliban against American drones and fighters, once they were deployed. In Iraq, the only mountains for an ISIS retreat are home to the Kurds, a Sunni nationality that has a very different agenda than the Arabs in ISIS. There, ISIS personnel will have to hide in the cities they have captured, but then a collapse from lack of munitions or money is but a matter of time. These guys are incapable of building or producing anything; they can only pillage and plunder.

Next, most of the reports on the ISIS crisis note that they are seen by the Sunni towns harboring them as being less worse than the Shia government in Baghdad. We have to keep in mind that Iraq, Syria and Lebanon are working their way through a kind of 100-years of religious war, partially similar to that between Protestants and Catholics that devastated Germany in the 16th and 17th Centuries. To an outsider, a Chinese or an Indian, say, that inter-Christian war makes about as much sense as does the inter-Muslim war today. There is precious little difference between medieval Christian dukes and barons and Muslim tribal leaders of today. All that can be said is that there are two sides and if you get involved, you are either an ally of one version of Islam or the other. There is no neutral ground.

The reaction to hit out at somebody after 2001 led to the invasion of Iraq, even though the 9/11 attackers were Saudis, with no Iraqi involvement — odd, that — and to the more credible involvement in Afghanistan. That overreaction was a major factor in the creation and success of today’s ISIS. Neither today is an existential threat to the United States, but their existence serves a political purpose to get the president’s political opponents excited and mobilized into getting him to try some overt action in Iraq that will solve nothing and matter less.

ISIS, with its staged video executions of a couple of unfortunate Americans and a Briton, has seemingly managed to create a new, but similar uproar akin to Al-Qaeda. The ISIS actions seem to be designed to egg on America, especially, to take action against them, which, given their relative weakness, is a strange strategy. A more likely explanation is that ISIS is using the assault against Christian Yazidis and the executions of reporters and aid workers to show to other Muslims that they are the real radical replacement to Al-Qaeda.

A third possible rationale is that ISIS hopes that American air action will lead to a Gaza-like urban destruction that will get sympathy and political mobilization in Muslim countries. If this, then they have likely underestimated President Obama, who, to me, seems like a guy who prefers a sharp stiletto to the warclub his predecessor carried. Sort of Chicago-style rather than Texas-style….

As to the future, I noted in an earlier column that similar, nasty idealists were faced by the British in Northern Ireland and the experience there was that as the leadership group was decimated, as with Al-Qaeda, the next batch is less idealistic and more thuggish until the whole thing wears itself out. In that sense, ISIS is Al-Queda’s ‘second string’, along with the Nigerian Boko Haram child abductors. These ISIS guys are like mosquitoes in a tent: they can’t really hurt you much, but their annoying humming and behavior can drive you nuts.

The international volunteers in ISIS could be a problem if they come back home after what is left of ISIS goes underground. Most, like those who returned from the Spanish Civil War in the late 1930s, went on to other things, their idealism played out by living through all the violence, but some will remain dangerous. Voiding their passports might help, but likely they have some access to stolen passports or to expert forgers. So, I suppose that the U.S. President and the Cubans had better get used to the probability that there will soon be a new crop of long-term inmates in Guantanamo, unless the ISIS fighters are taken out in Iraq by drone strikes or by unpleasant Shia captors.

We face failed or collapsed Muslim states all the way from Pakistan to Mali. The rise of the Islamists, salafists, Wahhabbis or whatever label they attach to themselves, is symbolic of the harsh difficulties that are accompanying the adaptation of these countries to the modern world. ISIS using social media in a quest to restore an 8th century caliphate has the makings of a new Monty Python sketch, if only the reality weren’t so horrifying and sad.

Rory Stewart, the British writer-politician, noted in his walk across Afghanistan after the Taliban had retreated to the mountains, that that country today would have been considered backward to its tenure under the Moghul rulers in the 1300s. Likely, Kemal Ataturk in the 1930s has found the only practical way to end all this: abolish the caliphate, secularize the state and society and get on with building a better life for people in the here and now. Leave the hereafter to Fridays in the mosque.