Part 1: Universities Without the Trappings 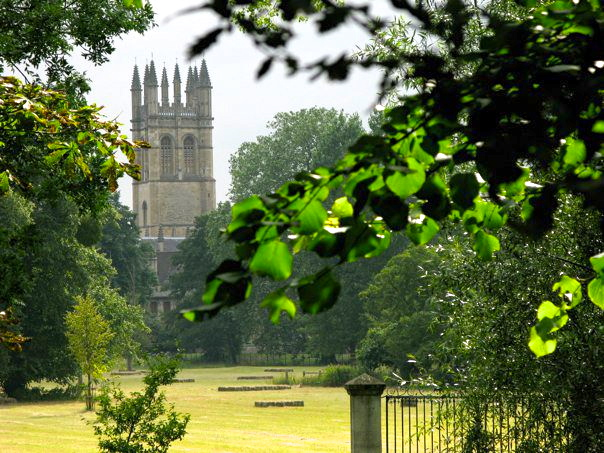 The “dreaming spires” of England’s University of Oxford were a rare true example of what Jim McNiven calls the fading “handicraft cultural dream” of a university education. Photo by Deborah Jones © 2008

You have to look at universities without their trappings of tradition, semi-mystical feeling and notions of honours and awards. See them instead as not-for-profit education institutions in an age where information is rapidly becoming democratized and commoditized (like hogs and logs), or as a single global information business subject to the same forces affecting all global information businesses today, from banks to Twitter.

The university model romanticized by many academics — Socrates imparting wisdom to a half-dozen students while sitting under a tree — is a ‘handicraft’ cultural dream. If it ever existed, it did so in the British model where students ‘read’ on their own, occasionally consulting professors about issues they had. This British model buckled under German course structures and then largely disappeared after the Harvard Business School adopted Taylorite1 practices in 1907, setting out, among other things, class sizes of 75 students. Harvard and other universities gradually adopted regularized classes of an hour each, offered at a specific time each day or week; they set up unit-based course credit systems and began to tie the hoary notion of tenure to research ‘productivity.’

Gradually, the American system spread across the world. The university system today is a globalized manufacturing activity that teaches pretty much the same topics in the same ways everywhere to a large segment of the world’s population of youths — sort of a McDonald’s with no corporate headquarters.

During the early 20th century, research was tied to the teaching process as a means of ensuring that professors would be bringing the latest ideas into class, rather than relying for decades on their old notes from when they were students. This worked for a while, but gradually the research function overtook teaching in importance.

Evaluation of teaching performance was a fuzzy task, and research was more easily evaluated for tenure and promotion

Evaluation of teaching performance is a fuzzy task, few professors were ever trained in a fashion like schoolteachers, while research production, measured in true Taylorite fashion through articles published in peer-reviewed journals, with the journals then being informally ranked in importance as ‘A’, ‘B’ seemed a definitive measure. The computer and the internet later allowed for easy comparisons of how many citations by others followed from a person’s publishing his or her articles.

For the individual professor wishing to survive and prosper in this system, the demands are clear. Research is #1 and only; productivity gains one access to outside funding and relief from teaching courses. Climbing the ladder requires the acceptance of one’s research by a reputable journal or journals. This acceptance comes when the research topics fit the broad parameters of what the journal reviewing committee sees as being important contributions to the discipline. Some of the same individuals making these judgments may be on faculty recruitment committees at their own universities, so publishing success leads to mobility in more ways than one.

This globalized system we now have starts to become apparent if you consider the mobility of the professoriat between institutions and relate it to the peer evaluations of individuals’ research. Moving up the levels from Lecturer to Assistant Professor to Associate Professor to Full Professor to Full Professor with a ‘Chair’ is faster if one moves along to better universities, bargaining for a higher rank, rather than waiting for the usual slow process to produce results at the same institution.

Reaching the higher levels of the ranking system leads to increased levels of outside funding, from which the university gets an ‘overhead’ cut, and should provide some reduction in one’s teaching load. Impressing one’s disciplinary peers is more important than those at one’s location. Local politicians who express hope there might be some relevance between professors’ scholarly research and the jurisdiction that pays a portion of their salaries are ignored for the most part.

Globalization also means that the overall set of courses offered at any institution reflects the informal global standardized curriculum. The foundation courses at universities across the globe are pretty much the same, with differences appearing to a degree in the offerings for upperclassmen/women majoring in a discipline. These specialized courses have much smaller attendance and often reflect the research interests of the faculty.

The standardized introductory courses are generally taught to large numbers of students. I have taught courses with 500 students and have heard of larger ones. The lecture becomes an entertainment, while the interpersonal teaching relationships are relegated to graduate tutors who meet 40-50 students at other scheduled times. No handicraft education; just manufacturing processes until you become a grad student.

In effect, whether one teaches in Hong Kong, Melbourne, Chicago, Toronto, San Juan, London, Jerusalem or Paris, virtually the same material is presented to virtually the same kinds of classes by the same kind of professors operating under the same pressures and terms of work as anywhere else. Only at very elite schools, or ones with very elite costing and pricing, is there more personalized instruction.

From the university’s perspective, the declining proportion of public funding led by the American states, the United Kingdom (and followed at a distance by Canadian provinces) leads to a business model that is increasingly based on the tuition and fees that come with each student. The large classes at the bottom of the hierarchy produce revenues that go towards paying for the small classes at the top, including the individualized instruction for PhD students.

Finally, in order to keep its reputation, the institution must provide graduate students that can assist in the research by the more prominent faculty, thereby keeping these faculty members at that institution. A good proportion of graduate students, especially in the arts and sciences, receive fellowships from the institution. They are paid amateurs, like those playing sports. The large classes also go a long way toward supporting the basic research time allowed for each faculty member, since a proportion of faculty time, generally around 40-50 per cent, is allocated for research time, time that students and their parents pay for in large measure.

The university’s bind is that with declining government subsidies, the cost to the payers of tuition is beginning to grow too heavy for them to bear. Yet, to downplay the research focus is to run the risk of losing faculty and losing reputation, something too heavy for the institution to bear. It is hard to keep faculty with reputations from moving to places that will pay more and provide more perks for their services and name. There are many thousands of universities all over the world all playing in the same arena and where the courses and the research rules are almost the same. No one institution can challenge this system and no one professor can defy it without risking his or her future.

I am not condemning the way things are set up, but simply trying to explain a reality. A system whose structures and incentives were created around 1900 has evolved in ways never dreamed of then and is today under threat from funding pressures and its own dysfunctions. Yet, it is hard to see where any single institution can opt out or make any functional changes. Further, the manufacturing model presently in use is of declining relevancy, especially in the manufacturing sector that was its inspiration. Does this mean the emerging network society will exercise a similar effect, leading to a new model for higher education? We’ll look at that side of things next.

Notes:
1. The Most Influential Man of the 20th Century by Jim McNiven on Facts and Opinions