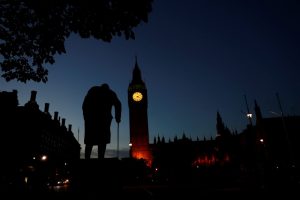 A long time ago, when I ran an organization whose role is analyzing and reporting on the economy of Atlantic Canada, one of my board members from the province of Newfoundland and Labrador made a comment that stuck with me. There are ‘big’ Newfoundlanders and ‘small’ Newfoundlanders, he said, referring to ones that wanted to take on the business world as a whole and win, and those who wanted to huddle behind a protectionist wall with their little piece of the economic pie. Ever since then, I have used his localism to look at all kinds of people, not just Newfoundlanders.

Since the 1960s, at least, the trends in the world have favored the ‘big’ types. They do include the likes of multinational companies, but they also include those in the tech sector who run little companies and who know that their success depends on how fast they can reach global scale. The whole panoply of trade barrier-lowering treaties, from tariff reductions to integrative economic agreements constituted the first steps toward a global economy. But there has been resistance from nationalist groups who see these moves as threats to personal, social and national integrity.

The arguments against globalization began to have resonance after the financial crash of 2007-8. The pain caused by widespread financial malfeasance, arrogance, greed and stupidity provided a platform for resistance.

Then the collapse of Middle Eastern and African States added a huge movement of peoples to Europe, whose countries have scant experience in accommodating immigration. The slowness or lack of economic recovery meant chronic distress for millions, which has been laid at the feet of international competition, even though there is ample proof that demographic stagnation and technological change have been more important causes.

The social aspect of the nationalist complaint is that immigrants, refugees or not, take jobs that might otherwise have gone to locals, and that the cultural differences between immigrants and locals are hard to deal with. These have a bit of truth in them. Immigrants come from the most adventuresome parts of their native cultures and could be more aggressive in job searches. Cultural differences may be seen negatively rather than as opportunities for local cultural expansion. Immigrant-based countries like Canada and the United States have more or less successfully grappled with these challenges and found it depends more on local willingness than anything else.

The economic arguments are more fantastical. The idea that carving whole countries out of the global trading system could lead to local prosperity makes little sense. Breaking up the globalized nature of manufacturing, communications and financial services companies is more a formula for ruin than prosperity.

Trying to do this by creating nationalist trade barriers would lead to a lot of job losses in all sorts of industries well before that country’s businesspeople could recreate downsized corporations and begin any rehiring. Restructuring an economy is not an automatic job-creator. Financial markets hate uncertainty and won’t lend until the uncertainty is resolved. Global corporations would not be able to repatriate jobs home without suffering from retaliation by potential losers. Not importing leads to non-exporting. In the end, stimulation could only be restored by wartime buildup, but this is not 1936. War means nuclear war.

So, we are coming to a crossroads. Either we continue with the globalization project that started with the Marshall Plan and the first GATT tariff reductions, or we don’t.

We still have to bring billions of people into some kind of economic parity with the rich parts of the world. It will mean profitably continuing and improving their situation, or we can pretend that parts of the world are a ‘gated community’ as far as the rest are concerned. This would lead to having to control these populations somehow or shutting down our internet communications so they don’t know what it is like on the other side of the ‘wall’.

What does continued globalization mean? The original goal of the General Agreement on Tariffs and Trade (GATT) on tariff reduction was largely met by the 1980s. A parallel step within Europe was toward more economic integration, first by the continental Europeans with the European Coal and Steel Community and then in the creation of Common Market. Then came the Canada-US Free Trade agreement in 1988, expanded into NAFTA about the same time as the creation of the European Union in 1993. A couple of years later, in 1995, the World Trade Organization was created to provide for a common set of rules for, basically, the whole globe to operate business and economic policy. Companies had similar rights and obligations within all of the national signatories’ economies. The agreement has not been perfect in its design nor execution, but it has made for the most level playing field the world has ever had.

So now, we are exhorted to break it up in the hopes that a few will be better off while others suffer. The double failure of nerve of the Cameron government in the UK, first in not acting as a properly elected government should by its permitting a referendum, and then campaigning against the ‘Brexit’ forces so ineffectively that it lost the vote, has led to the legitimizing of  nationalist attacks on the global rules that have benefitted everybody. Given the welter of trade rules that will not be affected by Brexit, it can be argued that the global economic system may not suffer, and that primarily, the UK will suffer the most. There are others, however, who would go further to fantasize extricating themselves from the WTO-globalized economy, promising to prospering from it while the rest of the ‘losers’ suffer.

Surprisingly, government does not operate like businesses. There is no global bankruptcy court out there to bail out national mistakes. There is no superior power making the rules to govern nations. To paraphrase Pogo, ‘they will meet the enemy, and it will be themselves’.

Maintaining and rebuilding confidence in the international economic system has to be Job One for policymakers today. We have something that works: there is no higher power to appeal to and no way to get off this big, blue marble we live on. Making it work after the idiocy of Brexit, to put it in the words of George Harrison and Ringo Starr, ‘It don’t come easy’.