Changes in Attitudes, or, The Best, and Worst of Times 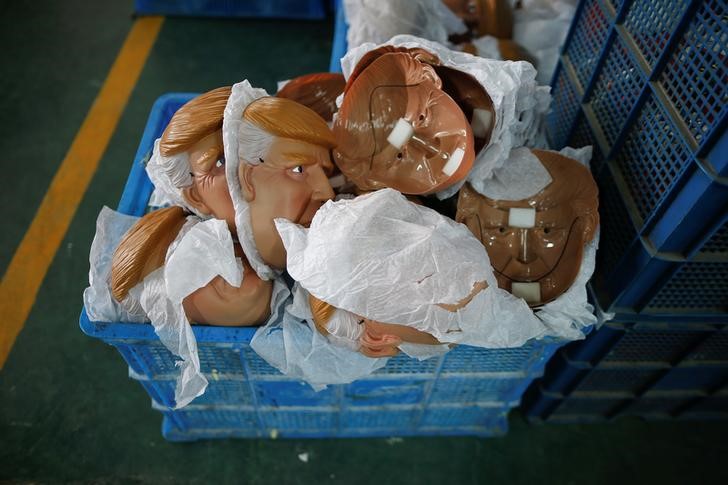 Above, masks of then-U.S. Republican presidential candidate Donald Trump in a box at Jinhua Partytime Latex Art and Crafts Factory in Jinhua, Zhejiang Province, China, May 25, 2016.  The company expected its Trump masks to sell out. See F&O’s photo essay: US election: manufacturing the masks. REUTERS/Aly Song

Well, I guess we don’t have to ‘yes, ma’am’ this time around. (See my last column, predicting Hillary Clinton as President.) I was unpleasantly surprised to be wrong. Sorry about that…

There is a lot of speculation that maybe America’s new President won’t really do what he said he would do. I wouldn’t bet on that. He has a supportive Congress, so there is little to check him on policy. The questions for today may be how hard will he push different parts of his agenda and what will he do if things like the economy backfire on him? It may have been possible for him to dispose of losing business assets in the past, but now the asset is the American economy, something a bit too big for a ‘willing buyer’ to speculate upon.

To our supporters, thank you. Newcomers, welcome to reader-supported Facts and Opinions, employee-owned and ad-free. We will continue only if readers like you chip in, at least 27 cents, on an honour system. If you value our work contribute below. Find details and more payment options here.

The problem is that the American economy is so entangled in the world economy that breaking outward investment ties will lead to others breaking inward investment ties. This could be a saw-off, leaving everyone unhappy. Also, making things in an economy with a $15 minimum wage versus importing the same from a place with, say, a $2 one, will raise the cost structure in the US economy—otherwise known as inflation.

Back to the 1980s is where I think a lot of the suburban/rural/small town electorate who supported him seems to want to go. People forget we had inflation then, very serious inflation that took years to get out of the system. I was ‘lucky’ in 1978 when I renewed my mortgage for 12%; a friend had to renew in 1981 at 21%. Commentators dreamed about the Valhalla of the future when prices would be stable and interest rates low.

This reminds me of the joke about the rational Swedes, when faced with the decision to change from driving on the British side of the road to that of the European side; have everyone with a license plate ending in an even number shift on Monday, and the odd numbers shift on Tuesday…

So, the problem is that you can’t go back again. Singer Jimmy Buffet noted that in his Changes in Latitudes. Trying to restore the old days just leads to trouble. Putin wants a Czarist Russia, Erdogan wants an Ottoman Turkey, Dutarte wants a Marcos Phillippines, the UK wants a pre-Thatcherite England, the Hungarians and the Poles want to go back to 1925, the Chinese seem to be reviving a bit of Mao, the North Koreans have always been in this camp, and ISIS would like the 8th century back, please.

It almost seems that people everywhere can’t bear peace and prosperity. ‘if we couldn’t laugh’…

Now the joke may be this, at least for the US. The unemployment rate has fallen to a low that borders on inflating the economy. Generally, those who look at these numbers feel that as much as 3 points in the unemployment rate comes from a statistical oddity, in that it includes those between jobs, sick or disabled and so forth. That only leaves about 1.5 points who may be unemployed and who meet the traditional criteria. Crudely put, this is the bottom of the barrel, employment-wise. At this point, it becomes rational for a teen-ager to quit school and drive a truck. Not quite what the future needs.

Then, the President-elect wants to get a lot of manufacturing jobs back, 1950s style. The problem is that most of those jobs did not go abroad. They went to Fanuc, the robot-maker’s equipment, or Microsoft, the computer-maker’s equipment, not to other people elsewhere in the world. Last year, American manufacturing had a record year in terms of output. But that output came from robotics and computers, not people. The same thing happened to farming in the first half of the 20th century. Even farming is high-tech today.

The solution to this conundrum is to do what some wag said about American involvement in the Vietnam War. ‘Just declare victory and go home’. If the economy keeps going at the good pace it has going now, ‘just declare victory’ and get onto the next agenda item.

Then, there is a potential economic problem out there that needs to be considered.

There has been a lot of controversy about what to do with all that corporate cash that has been kept abroad in order to avoid what are, arguably, too high taxes being placed upon it were it to be repatriated. A quick fix in terms of a tax cut is a possibility, given the majorities in both houses of Congress, but that fast inflow might lead to an increase in the value of the dollar.

Repatriating jobs will not be done by those companies repatriating the cash, since a high and rising dollar just makes keeping jobs overseas even more attractive. Now, raising the tax rate you just lowered because companies are acting rationally on the job side just means the money stays abroad. Very tricky, this magic act. Don’t trip or you’ll look like a clown.

Finally, if America is joining the economic nationalist crowd I mentioned above, it has to be noted that nationalist countries are really prone to settling things by force. America will be the big boy on the block, but now there will no longer be a policeman — the kind of task that America had assumed since 1950 or so. If deals can be made, swell, but if not, then push has to come to shove. Remember, the Keystone Cop is now going to be a player in the game. Can you play both roles at once without the other players trying to take a swipe at you? Have you learned nothing from the asymmetric warfare and ambushes others have been practicing for 20 years now?

As Jimmy said in his song, ‘If we weren’t all crazy, we’d just go insane.’

With a tip of the rum glass to Jimmy Buffett:

You may also be interested in these stories on F&O:

The curse of Pandora is now out of the box and the age of the collapse of the American Imperium is upon us.