Squib: Save us from the Madness!

It’s hard to hear sense in North American politics lately: the static of polarized rhetoric deafens reason and impairs mercy. This is especially so in the United States where, astonishingly, the failure of citizens to elect competent politicians has shut down the federal government. And then – clear as a bell – ring out the words of chaplain Barry C. Black, speaking to the United States Senate:

“Save us from the madness!”*
“We acknowledge our transgressions, our shortcomings, our smugness, our selfishness and our pride!”
“Deliver us from the hypocrisy of attempting to sound reasonable while being unreasonable!”
“Remove the burdens of those who are the collateral damage of this government shutdown …”

Black’s scathing criticisms of American politicians, and his call to their better natures, will surely rank in history as some of the best quotes of this bleak year. Most of his criticisms were delivered in his morning prayers to the Senate. Last week Black, by a remarkable special invitation, also led prayers in the House of Congress.

“Remove from them that stubborn pride which imagines itself to be above and beyond criticism!”
“Forgive them the blunders they have committed!”
“Forgive us also when we put politics ahead of progress!” 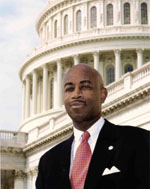 Black, Senate chaplain for a decade, is a formidable man: he holds several master’s and two PhD degrees, and prior to his Senate role he was Chief of Navy Chaplains.

But the job is supposed to be non-partisan so, amidst the toxic acrimony of modern insensible American politics, he is under fire. Black  has in the past been criticized by secularists for suggesting the first duty of an American lawmaker is to their god rather than to the U.S. constitution. Now the focus has moved from religious controversies to partisanship: numerous media commentators are questioning whether he’s getting “political” – as if everything were not “political.” One familiar cable news showman (who is so toxic I won’t offer him the respect of including his name) is accusing Black outright of praying “for the left’s agenda.”

As a non-American who like everyone else cannot escape the cacophony from Washington, I no longer care whose agenda Black might be serving. That the clarity of his voice can burst through the terrible noise makes him my man of the month.

“Save us from the madness,” indeed.

*The exclamation marks are mine.