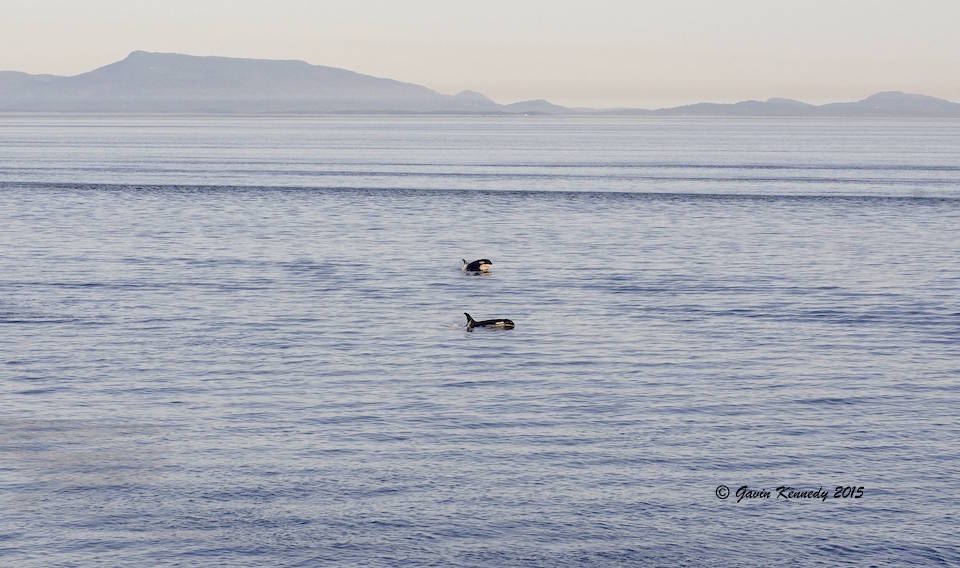 The tale of Springer, the spunky orphaned orca, has the superficial tenderness of a Disney flick. Below the surface, however, lurks a film noir: Just what is causing so many killer whales, Springer’s mother among them, to disappear from the waters off British Columbia?

Since January, when the lost and lonely youngster wandered into busy Puget Sound near Seattle, the North American media and public have been transfixed.

Springer demonstrated no fear of humans and was approaching boats in the busy waterway. She also was sick and underweight, so the U.S. National Marine and Fisheries Service captured her, nursed her back to health, then sent her aboard a catamaran to Canada last weekend. Since then, she has been shadowing a pod of her relatives, but still sidling up to boats that come near.

Scientists hope that her story will have a happy ending, that her affinity for humans will diminish and she will be adopted by the pod. But little has been said about what produced Springer’s predicament in the first place. And unless that puzzle is solved, both she and her kind may face a future that one expert describes as “a dead end.”

Killer whales are sometimes called the canaries of the oceans. Miners carried the birds into coal pits, and as long as they lived, the miners figured they could breath safely. Likewise, orcas are a barometer of the ocean environment because they are at the top of the food chain and their complex social groups make them especially sensitive to change.

Now scientists suspect that some of B.C.’s “ocean canaries” are gasping for life.

Emerging research suggests that noise from vessels hampers the orcas’ ability to navigate, communicate and hunt for food. As well, recent tests show that their flesh contains record-high levels of such toxins as polychlorinated biphenyls, which may make them more susceptible to disease and reproductive and neurological problems. To make matters worse, overfishing of salmon and other marine species suggests that their food supply is dwindling.

Such factors may explain the precipitous drop in Vancouver Island’s so-called southern resident population. Within six years, the number of whales off the island’s southern coast has plunged from 100 to 78.

Researchers now fear that the whales, which elicit oohs and ahhs and are much photographed by ferry passengers, boaters and coastal dwellers in B.C. and Washington State, are effectively extinct. Because whale pods stay together for life, tend not to take in newcomers and now have so few breeding-age members left, “they may be a dead-end deal,” says John Nightingale of the Vancouver Aquarium.

Some of the southern pods’ woes can be explained by the capture of young animals for the aquarium trade in the 1970s. But even the stronger community of about 300 off the island’s north coast has younger adults such as Springer’s mother vanishing. “It suggests,” notes Volker Deecka, a marine mammal researcher at the Vancouver Aquarium and University of British Columbia, “that something else is going on.”

Some problems would be easy to fix if people simply paid attention, says Mr. Deecka, who is writing a PhD thesis on orca acoustics.

He suspects that noise pollution “could have a tremendous impact on these animals, although we can’t prove it yet.”

Vessels are designed to expel exhaust and contain their propeller noises under water, for the benefit of people above the surface. In areas of high marine traffic, the subsurface din is akin to a city full of cars without mufflers, Mr. Deecka says. “We don’t hear the noise because we’ve got our ears in the air. . . . The biggest problem is from cruise ships, tankers and [fishing boats] pulling nets.”

The navy and whale-watching industry already know how to rig vessels for silent running. Short of that, Mr. Deecka recommends such simple measures as ensuring that propellers are working efficiently and mounting boat engines on elastic shock absorbers. “The technology is out there, but people aren’t aware of the problem,” he notes.

A bigger problem stems from the toxins accumulating in the bodies of marine animals. Government and industry involvement is required to clean up pollutants, but environmentalist Jim Fulton of the David Suzuki Foundation says there is little political will to spend money or enforce standards. The aquarium’s Mr. Nightingale, however, says that ordinary citizens can play a major role if they’d just stop dumping poisons such as paint down toilets and drains. “I tell grade schoolers, ‘Don’t pour anything down the storm drain you don’t want to drink.’ “

Mr. Fulton, meanwhile, is bemused by the massive interest in Springer as well as the effort being expended to return her to the wild.

The Canadian and U.S. governments, as well as non-profit agencies and companies volunteering goods and services, have poured as much as $800,000 into bringing one small orphan back to Canadian waters. The media are providing regular updates of her attempts to reunite with her relatives in the Johnston Strait, and people are being asked to donate to the effort through the Vancouver Aquarium.

“Good grief,” he says, “if this kind of extraordinary focus and caring was directed to the larger killer whale population, it would be a great thing.”

*This story was first published by the Globe and Mail newspaper in Toronto, July 20, 2002. The author, who holds the copyright, uploaded it, with the photo, to F&O in 2017.

Update: Springer was successfully reintroduced to her family of Northern Resident Orcas, and reportedly gave birth to her second calf in 2017. The Southern Resident population remains in crisis.

Recommended reading:  The Killer Whale Who Changed the World, by Mark Leiren-Young,
Published by Greystone in partnership with the David Suzuki Institute. Blurb: Until July 16, 1964 the world thought killer whales were monsters – then the world met Moby Doll.