If slaughterhouses had glass walls …

“If slaughterhouses had glass walls, we would all be vegetarian,” Paul McCartney famously said.

There are no walls in the alleys that served as slaughterhouses in Yulin, China. Yulin celebrated its annual Dog Meat Festival in June, and the world watched as some 10,000 of “man’s best friends” crowded in cages and watched their fellows being dragged out, killed and grilled, then eaten with gusto. (See the Reuters photo essay on F&O’s menu, here.) 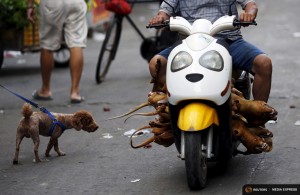 Yulin’s annual grotesquerie, held to celebrate the solstice and the onset of summer, is over. Outraged dog lovers the world over can relax with the normal fare that saturates our pop news and social media, of LOL catz and pictures of bacon dishes.

Most of the regular folk and celebrities who expressed outrage, and signed petitions protesting the grisly deaths of several thousand animals in the Dog Meat Festival, will not want to know that the Asia Canine Protection Alliance claims some 25 million dogs are killed and eaten each year, mostly in Asian countries.

This statistic is not at the top of the global mind. Dog meat does not much feature in cook books or on food shows. Perhaps the lack of perspective is because the people who eat those 25 million dogs are more savvy than the hapless Yulin residents, roasted each year by the global publicity. Maybe the masses of regular dog eaters are less exposed to globalized infotainment and social media.  I have yet to see a selfie of someone eating one of those 25 million dogs.

The Alliance is one of the few sources of information about dog meat consumption. Data on livestock by the United Nations Food and Agriculture Organization do not include dogs. The FAO does, however, provide many details about the other land-based animals that humans are consuming in 2015. The FAO expects this meat consumption to grow by 1.5 per cent each year; the rate is faster in developing countries. It divides these by “commodity:”

Units of these commodities dwarf the 25 million dog units. By 2030 global production will reach, estimates the FAO, 1,858 million cattle and buffaloes; 2,309 million sheep and goats; 873 million pigs, and 15,067 million birds.

Few of us, outside the food industry or animal rights and environmentalist circles,  pay attention to this massive production. That’s largely because, in the developed countries where more people have the resources to mount protests, and more time they can use to think and research, people are spared the gory details of the production processes on display in Yulin’s alleys. In the modern developed world people-as-consumers buy our meat neatly pre-processed or, if it’s raw, neatly wrapped in plastic on styrofoam trays with sanitary pads to absorb leaking body fluids.

Also, fewer and fewer of us ever bear witness to the life cycles of the animals whose parts arrive, sanitized and decorated, in our stores and on our plates. Traditional food production — which we called “the family farm” until very recently — has abruptly vanished from most of our communities. Farms and ranches have been replaced with massive centralized food factories, called Intensive Industrial Livestock Production Systems.

They make use of improved genetic material and sophisticated feeding systems, and require highly skilled technical and business management. They are also dependent on inputs of high-energy and protein-rich feeds and animal health prophylactics, and consume considerable amounts of fossil fuel, both directly and indirectly. The wholesale transfer of these types of production systems has been facilitated by the relative ease and speed with which the required infrastructure and equipment can be operationalized in so called “turnkey” operations. In recent years, industrial livestock production grew at twice the annual rate of the more traditional, mixed farming systems .… Industrial enterprises now account for 74 of the world’s total poultry production, 40 percent of pig meat and 68 percent of eggs.”

What to make of all this data? There are endless ways to consider the dogs killed for meat in Asia, or the cows, sheep, pigs and birds that live and die in Intensive Industrial Livestock Production Systems world wide. Endless questions arise about how and what to feed billions of humans, and about the impact on the environment and human health of different kinds of foods, from vegetables to beans to steak.

But the questions that most interest me have to do with lines. Where, when, how and why do we draw lines between eating one thing, but not another? Where lie the lines between Yulin’s alleys and the refrigerated aisles of our supermarkets?

The vast majority of us cross these lines daily — not least because those who eschew meat are so few as to be negligible. The data is dubious, but in most countries less than five per cent of citizens are vegetarian (a term for which definitions are also dubious). That rate rises to about 10 % in Italy, 13% in Taiwan, and 40 % in India.

Even if these numbers are off, the vast majority of us eat animals, even as we recoil at Yulin’s Dog Meat Festival. Clearly, most of us recognize lines between taboo and acceptable foods. They’re quite visible and easily seen — but following these lines is risky, because they can lead us into very dark places indeed.

“If we cut up beasts simply because they cannot prevent us and because we are backing our own side in the struggle for existence, it is only logical to cut up imbeciles, criminals, enemies, or capitalists for the same reasons,” C.S. Lewis pointed out. Lewis, of course, is best known as the author of the beloved children’s books whose characters stumble through a wardrobe into the magical world of Narnia. We are less readily charmed by Lewis’s philosophy, because he challenges our own magical thinking in the real world.

But once a year, when Yulin’s Dog Meat Festival rolls around, we happily draw big, fat lines dividing our world from the universe of the dog eaters. Once a year we enthusiastically hurl outraged invective at them. Then, when the grotesquerie is over, we continue with our regular lives.

My own regular life calls. I have almost had my fill of gazing at the photo gallery of grisly photos of the Dog Meat Festival, which I force myself to witness. I will soon return to dealing with the LOL catz and photos of bacon that pervade my Internet experience.

But first, will you please join me in giving another fleeting thought to McCartney’s quip, about glass walls and slaughterhouses?

I think it evokes, oddly, an old proverb: “Those who live in glass houses should not throw stones.” And following that line, I decide that McCartney was wrong.

If there were glass walls on the Intensive Industrial Livestock Production Systems that produce most of the world’s meat, most of us would not even bother to look. I know this, because we — who throw stones of moral outrage at the people whose grisly practices are exposed in Yulin’s alleys — have not even noticed that we live behind glass walls.