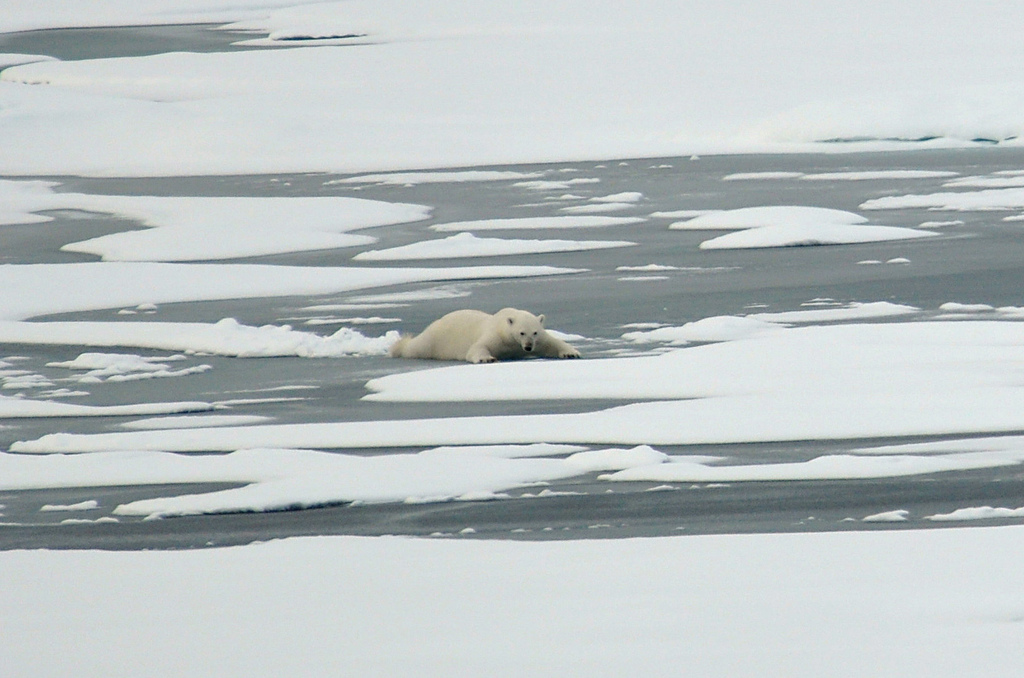 “Why, of course, the people don’t want war. But, after all, it is the leaders of the country who determine the policy and it is always a simple matter to drag the people along, whether it is a democracy or a fascist dictatorship or a Parliament or a Communist dictatorship. Voice or no voice, the people can always be brought to the bidding of the leaders. That is easy. All you have to do is tell them they are being attacked and denounce the pacifists for lack of patriotism and exposing the country to danger. It works the same way in any country.” — Reichsmarschall Hermann Goring, 1946*

Consider the view from the conventional ‘top’ of the globe: the Arctic Ocean centred on the North Pole, embraced by two great sweeps of continental coastline. Most of that coastline belongs to either Russia or Canada, the world’s two biggest countries, together ruling over nearly a fifth of the planet’s land surface outside Antarctica.

Both countries’ landscapes contain big portions of what’s left of the relatively undamaged ecosystems that underwrite our species’ natural security. They also hold, in their permafrost, enough sequestered carbon to throw global warming into out-of-control overdrive if it is allowed to melt. And in both countries, enigmatic leaders are following Hermann Goring’s model to subdue dissent while they throw those ecosystems almost literally on the bonfire in their reckless urgency to extract and sell fossil fuels.

Vladimir Putin may eclipse Stephen Harper on the scale of macho. The Russian president wrestles tigers and photographs well rippling his muscular six-pack. On the one occasion on which the Canadian Prime Minister came within ear-shot of danger, he hid in a broom closet. Mental imagery of his naked torso is best avoided entirely.

Nonetheless, the two men have more than a capacity for a mirthless blue-eyed stare in common. Pedal-to-the-metal extraction of oil and other minerals is central to both their political strategies. Both northern countries’ economies rely disproportionately on foreign earnings from oil, gas and mineral sales. In both cases, that dependence is made all the greater by their leaders’ monocular economic vision, which has left both nations’ manufacturing and service sectors to wither.

Both Harper and Putin, from different motives but with equal ruthlessness, are putting at risk the planet’s bioclimatic stability to pursue hubristic personal ambitions. And both are ready to wield every power of their respective offices to eliminate opposition.

That Putin and Harper are so alike, in rolling the dice with humanity’s natural security, is barely noticed. Partly, in Canada at any rate, this is because the two are playing out a show of mutual antagonism: Canada’s pusillanimous Prime Minister has gone out of his way to criticize Russia’s President in diplomatic settings where there is little likelihood that the latter will demand he take it outside.

But mainly it is because in each country, the two men have been able to deploy Goring’s recipe with great success.

Until the Ruble’s recent fall through the exchange-trading floor (and in some polls1 still) Putin’s prosecution of a semi-deniable, ‘defensive’ micro-war just across Russia’s border with Ukraine has won him wide popular support. Harper’s poll numbers have rebounded to a three-year high on a campaign of inflammatory public statements fanning Canadians’ fear of the purported reach of Islamic terrorism.

Of the two accomplishments, Harper’s is the more impressive. Putin began with several advantages: a political culture accustomed to autocrats, a ready-made ethnic nativist narrative ready to hand for propaganda purposes, and the never-fully-disbanded networks of the secret intelligence agency in which he once served as an officer. The Russian strongman needed only to crush the first pale seedlings of democracy in order to prosper.

Harper needed to destroy a democracy that not so long ago appeared as strong and vigorous as the mature maple whose scarlet leaf adorns Canada’s flag.

Canada’s strongman had to distort an established culture of tolerance, civility and liberty into one of paranoia, rancour and control. Through relentless abuse of largely unwritten Parliamentary rules of procedure, the silencing of independent voices in the national public service and the persecution of those in civil society, through disciplined deception of the Canadian public and now the late Nazi Reichsmarschall’s ageless stratagem, Harper has almost managed it.

His Parliamentary majority will shortly allow Harper, with the support of the third-placed Liberal Party, to push through new legislation that will expand his security forces’ powers of surveillance and pre-emptive arrest. What Putin’s Canadian twin might do with those powers was strongly suggested by an intelligence report prepared for Canada’s paramilitary Mounted Police, and leaked recently to a newspaper.2

It revealed just how debased by politics the storied force has become. The RCMP document dismissed established science on climate change, and lumped citizens exercising their civil right to argue for a post-carbon economy together with “militants and violent extremists,” in the “growing, highly organized and well-financed anti-Canada petroleum movement.”

Canadians are largely lapping it up. As are Russians. Meanwhile the two nations that together control nearly one-fifth of the living landscapes on which humanity’s natural security depends, are under the thumbs of brigands.

“Why, of course, the people don’t want war,” Goering shrugged. “Why would some poor slob on a farm want to risk his life in a war when the best that he can get out of it is to come back to his farm in one piece. Naturally, the common people don’t want war; neither in Russia nor in England nor in America, nor for that matter in Germany. That is understood. But, after all, it is the leaders of the country who determine the policy and it is always a simple matter to drag the people along, whether it is a democracy or a fascist dictatorship or a Parliament or a Communist dictatorship.”   ”There is one difference,” I pointed out. “In a democracy the people have some say in the matter through their elected representatives, and in the United States only Congress can declare wars.”   ”Oh, that is all well and good, but, voice or no voice, the people can always be brought to the bidding of the leaders. That is easy. All you have to do is tell them they are being attacked and denounce the pacifists for lack of patriotism and exposing the country to danger. It works the same way in any country.”

Gustave Gilbert, a German-speaking intelligence officer and psychologist who was granted free access by the Allies to all the prisoners held in the Nuremberg jail. Gilbert kept a journal of his observations of the proceedings and his conversations with the prisoners, which he later published in the book Nuremberg Diary.