The Real ‘Game-Changer’ was not in Beijing. Has the ‘Anglosphere’ lost its Mojo? 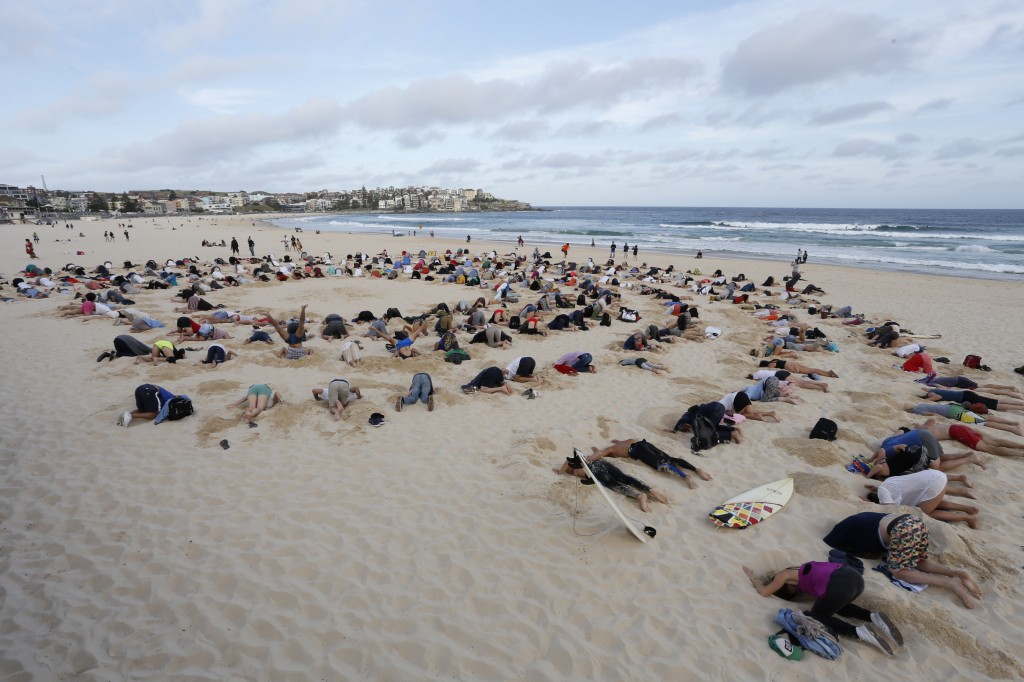 Hundreds of Australians buried their heads in the sand at Bondi Beach to protest Australia’s climate change policy. Photo from 350.org

Once upon a time an amalgam of rigorous, inquisitive candor about the physical world, and a deep delusion about superior racial entitlement, delivered control of two of the four continents that were up for colonial grabs in the 18th century to Britain.

Britain’s legal and political philosophy, its English language, and to a large extent genetic descendants of its families, dominate North America and Australia to this day. Europeans, Latin Americans, and others outside this socio-political clan have resented their exclusion and berated the ‘anglo’ model of cut-throat corporate permissiveness — what used to be called laissez-faire and is now re-branded for global distribution as neo-liberalism.

That fewer descendants of Empire persist in their delusions of racial superiority is a welcome development. But it’s worrying to see the Anglosphere also abandoning its realism about the physical world.

Exhibit A in this regard is climate change.

This week, optimists greeted with hosannas the announcement that Presidents Obama of the United States and Xi of China had agreed to a common statement setting out their respective goals to contain and eventually reduce their combined greenhouse gas emissions. The popular headline word was “game-changer.”

Sorry, but it was nothing of the sort. As numerous pundits pointed out, in restating China’s intention to allow GHG emissions to rise until 2030 before they begin to decline, and putting into words the reductions that are anticipated from U.S. actions already taken, the statement quite literally changed nothing.

More resilient analysts replied that while this was so, the statement will nonetheless deprive obstructionists in high-emitting rich countries (among whom the anglosphere is prominent) of the argument that those countries should do nothing to reduce their emissions until large developing countries (ie: China) act to reduce releases that, on a per-capita basis, are already far lower in comparison.

This ignores an inconvenient truth: it is the anglosphere, more narrowly than ‘rich developed countries’ in general, which has been most susceptible to the obstructionists’ argument. (Russia, a national kleptocracy, is a different case).

There is enough wiggle room in China’s statement of intent to provide obstructionists with all the grounds they need to keep their heels dug in (as well as their heads in the sand — as one especially entertaining demonstration on an Australian beach (in image above) observed in literal mimicry).

More significantly, the four countries that constitute the dominant part of the anglosphere — Britain, the United States, Canada and Australia — have all elected obstructionist governments that, to varying degrees are indifferent to physical facts.

Canada may lead in its indifference. Under the extreme neo-conservativism of Prime Minister Stephen Harper, it has gutted most of its national science capacity while blithely ignoring its own lowered goals for reducing its climate changing emissions; it now admits those will balloon another 16 per cent by 2030 — without necessarily peaking there.

Under P.M. Tony Abbott — a Harper protégé — Australia scrapped its Climate Commission, which had been providing the country with science-based information about its fast-changing weather patterns, along with a carbon tax which was just beginning to address its world-leading per-capita emissions.

And the reality of the United States is that President Obama is the most paralyzed lame duck to occupy the Oval Office in at least half a century. The Congress that Americans have just elected (quite possibly through no fault of their own, but that is another story), is loud in its rejection both of natural science and what it terms the ‘War on coal.’

This is not the brutal but highly successful anglo realism that conquered continents. It is wishful thinking. And in statecraft as in survival training (and the two should be more closely allied under our present circumstances), wishful thinking most often leads to fatal outcomes.

Happily, it hardly matters that the Xi-Obama climate declaration has changed nothing. China has its own good reasons for meeting or beating its climate goals — they coincide with such other pressing objectives as responding to popular demands for clean air and other basic elements of natural security.

And a change much more significant and substantial than the oversold symbolism of the photo-op moment in Beijing is already taking hold in developed countries beyond and within the obstructionist-led anglosphere block.

That change is in the hard-nosed arithmetic of profit. It is becoming increasingly apparent that the money is not in coal or oil or even, over the long term, in natural gas. It’s in solar and wind and the manufacturing and service jobs of a differently configured economy.

Germany and Denmark are both within striking distance of generating 100 per cent of their electricity needs from renewable sources. Europe’s cyclists support 655,000 jobs there — outnumbering miners and quarry workers and more than twice as many as it employs in steel making. Plummeting costs in the United States have brought solar power to near parity with fossil-fuel-fired grid electricity in more than 40 states. Installations of new solar generation in that country are out-pacing coal.

That’s not the whole picture of course. Solar in the U.S. benefits from subsidies which are set to disappear next year. It may take only moving air to turn a windmill, but it takes plastics and energy (often fossil-fueled) to build and erect one. True enough. But then, subsidies for fossil fuels outstrip those to renewables by far. And beyond a certain point, existing windmills can provide the energy it takes to create new ones. Hydrocarbons stabilized in plastic aren’t heating the atmosphere.

The point is not that any of these are wholly clean or free of downsides.

The point is that it is becoming clear, in one jurisdiction after another, that a second popular obstructionist claim — that renewable energy isn’t ready to shoulder the heavy lifting in the economy; that it’s just a ‘niche’ product for poseur liberals — is also untrue. Increasingly, the power of the wind and sunshine are indeed doing the heavy lifting.

In combination with more efficient building and transportation techniques, by midcentury we could have the entire economy whirring along on renewable energy, according to a recent assessment by the independent World Future Council.

The point, in short, is that the economics have shifted. The future will not belong to tar-sand boilers or coal miners. It will belong to the places that have invested in the technologies of clean power and zero-energy buildings.

In this shift the anglosphere is being caught, as they say in England, ‘wrong footed’. For a reason, look no further than the fossil fuel companies that exercise outsize influence over those country’s legislators.

Meanwhile, the game-changer’s not in the diplomacy. It’s in the balance sheets.

Related work on Facts and Opinions:

The right has won control of the English-speaking world – thanks to the weakness of the left. By Jason Wilson, the Guardian

Why your taxes pay to make climate change worse. By Don Pittis, CBC