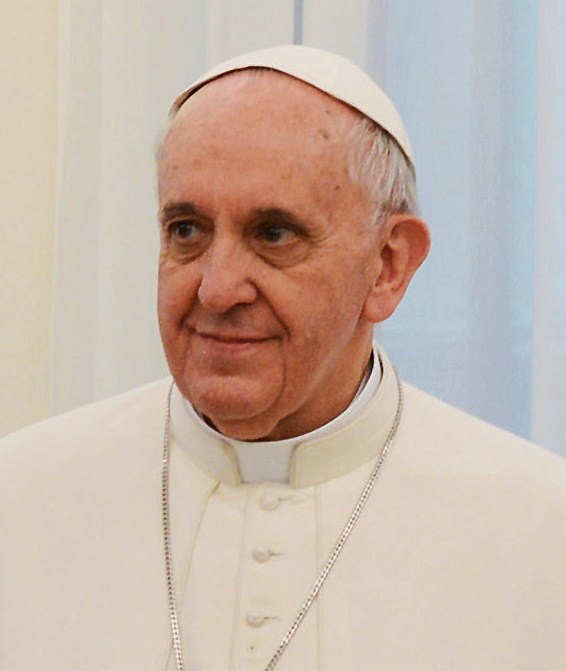 It’s hard to know what to make of the news that Pope Francis is planning an encyclical on climate change. On one hand, any intervention that pushes us to save the climate our species grew up with is a good thing. On the other, he stands on so much baggage it’s hard to keep a straight face.

But let’s not stumble over centuries of graft, complicity in genocides, doctrinal misogyny and overlooked pedophilia. Let’s not even dwell on the fact that one of Francis’ predecessors persecuted Galileo for suggesting the sun didn’t orbit the earth. Instead, let’s think of the coming encyclical as a 21st century version of Martin Luther’s ninety-five theses — in reverse.

Luther may or may not have nailed them to the door of a church in 1517, but his itemized charges echoed across a continent. They called out the Roman Catholic Church of the day for its many mercenary sins, from loan-sharking, to the sale of indulgences — ‘get out of purgatory free’ cards, popular among well-to-do sinners. Luther’s protest note fired the opening shot in the Protestant Reformation that ultimately split European Christianity in two.

Pope Francis’ encyclical — whose contents have been widely telegraphed — will do to today’s most rabid Protestants what Luther did to the Catholic Church of old. It will call out its extremists for their greed and selfishness.

In a contest of cosmologies unseen since the Holy Mother Church stopped (mostly) burning heretics at the stake, the encyclical will oppose two views of humanity’s place in creation as different as Galileo’s and Copernicus’. Only this time, the Pope is on Galileo’s side.

Catholicism has always been a bastard stew deeply infused with pagan roots and spices. Its promiscuous embrace of older mythologies has been the secret of much of its success. Many of the faiths it absorbed were rooted in the divinity of nature. Animism and pantheisms held ‘sacred’ animals and places. Francis’ church retains this DNA; the very word ‘catholic’ means ‘universal’ or ‘all encompassing.’

Protestantism, by contrast, was conceived in the rational, humanist values of the Enlightenment. Like Copernicus, its adherents viewed man as the moral centre, sole measure, and highest purpose of existence. Everything else was for us to exercise “dominion” over, and turn to profit. It’s no accident that so many founding thinkers of today’s market liberalism were early Protestants: the Thomases Malthus and Hobbes, John Locke and Adam Smith.

Paradoxically, the scalpel that irrevocably excised the human animal from nature’s figurative bosom belonged to a French Catholic: René Descartes. The irreconcilable dualism he imagined between the human essence, and everything else, laid the foundation for European and later American alienation of man and his works from the habitat that sustains them.

Economic liberalism and Protestantism have had an ongoing non-exclusive affair ever since. It is again no accident that both find their most unrestrained positions in America, where the worship of the atomistic individual (on which they agree) has become national faith. Its creed: ‘It’s all about me.”

Forget for a moment the blood and hypocrisy-stained backdrop of Francis’ encyclical. On the basis of documents released by the Pontifical Academy of Natural Sciences, and statements from Vatican insiders, he will rebuke as greed and selfishness the anthropocentric conceit (in several senses of the word) at the heart of market liberalism. He’s unlikely to say, but won’t be unaware, that the staunchest defenders of “It’s all about me” — and the global citizens most resistant to climate reality — are America’s radical Protestants.

The Pontifical Academy is down with science. Last month it released a document on Climate Change and the Common Good. “Although we are an inseparable part of the living world, entirely dependent on it for every aspect of our lives,” the Academy warned, “we are destroying it with blinding speed.” This, it added, constitutes human society’s top “moral and ethical issue.”

Not for that portion of American Protestantism variously described as evangelical, fundamentalist, Dominionist, Social Conservative, and simply loopy. Their burning issues are more likely to be gay marriage and abortion. (Well, they share that with the Vatican at least). And getting rich.

Personal wealth, according to ‘Prosperity theology,’ is the convenient belief that wealth is virtue, so the wealthier you are, the more virtue you possess. This idea has been traced to the pioneering televangelist power couple Jim and Tammy Faye Bakker. It is kept alive in the likes of Pastor Creflo Dollar (really), who only recently abandoned a plea to his Atlanta mega-church parishioners to buy him a new private jet (he agreed to suffer with his present older plane). These believers are ideological bed-mates with some of America’s most extreme vendors of neoliberal Kool-Aid. Among the social-conservative Christians who populate middle America’s business class, Ayn Rand is a secular saint.

The Heartland Institute, funded by the libertarian Koch brothers, is sending a “pre-buttal” (really, that’s what they’re calling it) embassy to the Vatican to talk Pope Francis out of it. One of those who plans to lecture the Pontiff is Dr. E. Calvin Beisner, national spokesman for the Cornwall Alliance for the Stewardship of Creation.

The Alliance is one of countless micro-faiths left over from Luther’s Big Bang. Like many others, its interest in fact ends on the affirmation that “the Bible … is the sole, absolute, inerrant epistemological basis for mankind for all knowledge of all things, seen and unseen, and that all claims of truth and moral duty that contradict it are false and harmful.” The Prime Minister of Canada adheres to this Alliance.

The Alliance does as much denying as affirming. In its “Biblical Perspective of Environmental Stewardship: Subduing and Ruling the Earth,” it declares:

We deny that an infinitely wise Designer… of the Earth would have made it susceptible to catastrophic degradation from … small causes. [Take that, tiny CO2 molecules.]

We deny that the Garden of Eden represents the whole Earth and that the instruction to “cultivate and guard” [it] ought to … mean that man is to “serve and protect” … or… “worship and protect” the Garden or the Earth. [Up yours, Gaia.]

That last bit sounds a bit post-Biblical to me, but I’m no scholar. More positively, the Alliance is for “cost/benefit analysis” (Affirmation 22) and DDT (No. 25).

In this ‘theo-con’ Christianity, God wants you to get as much bling as you can. And go ahead and rip up the planet; other critters are only there for us to use. Even possibly “abuse” (yes, the Cornwall group goes there). And don’t worry, God won’t let the planet burn out.

Against that, the Pope is expected to call his faithful to what the Vatican has coined, “integral ecology.”

I’ve heard this before. A Dene administrator explained it to me with the benefit of a whiteboard in a band office near Great Bear Lake, in Canada’s Northwest Territories, once. The creator, other people, and the Earth sat at the corners of a triangle. To be a dene, a proper man, was to be at the centre of the trinity — in balance with all three.

We spin around the universe; the universe does not revolve around us. The Enlightenment’s inbred offspring have devolved into distorted pretenses of men; their faith is sociopathy. Somewhere in the Mother Church (whatever her past and present faults) flows the blood of Gaia and of Pachamama.

Cornwall Alliance: http://www.cornwallalliance.org/landmark-documents/the-biblical-perspective-of-environmental-stewardship-subduing-and-ruling-the-earth-to-the-glory-of-god-and-the-benefit-of-our-neighbors/
Cardinal Turkson: http://www.catholicbishops.ie/2015/03/05/cardinal-peter-turkson-delivers-trocaire-2015-lenten-lecture-saint-patricks-pontifical-university-maynooth/
Pontifical Academy Climate Change and The Common Good: A Statement Of The Problem And The Demand For Transformative Solutions, The Pontifical Academy of Sciences and the Pontifical Academy of Social Sciences: http://www.casinapioiv.va/content/dam/accademia/pdf/protect/climate_change_common_good.pdf