On the fiction of averages and meaning of marbles

North America’s recent wintry blast, and one unfortunate crew of ice-detained eco-cruisers in the south polar sea, have stirred the blood of the science deniers. According to well-paid propagandists working for media outlets,1 small-time municipal councillors,2 and a certain spotlight-seeking New York City property magnate and game-show host,3 the occurrence of cold and — OMG! — snow, is sufficient to overlook millions of other data points meticulously collected around the globe over the last 40 years, and conclude, ever hopefully, that this whole climatey, changey, thing is a hoax. 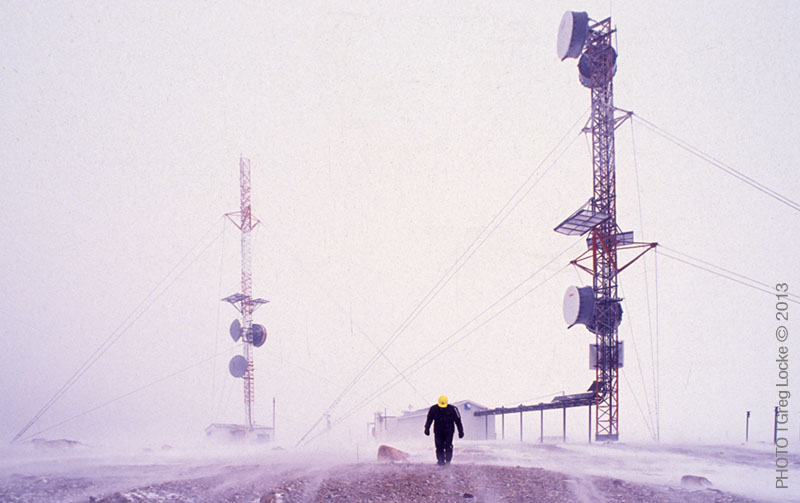 Servicing communications towers during a winter storm on the Doe Hills in Newfoundland. Photo by Greg Locke © 2013

If only it were so.

Sensible observers have already pointed out the many reasons why the leap of illogic such deniers make is, well, illogical. But their reaction is emotionally understandable. A shot of the kind of winter we haven’t experienced often in the last quarter-century certainly feels counter-intuitive when we’re told the planet is accumulating heat.

The trouble is that when scientists and advocates explain that greenhouse gasses are trapping more of the sun’s heat in the atmosphere and raising Earth’s temperature, they are speaking about its average temperature. And the average is a mathematical fiction. None of us actually live there. This is especially so for weather, the word we use in English to describe the perpetual currents of air and water4 that swirl around our blue marble in space. Most of the time, what we actually experience is a state on one side of the average or the other.

Examples: the average temperature of the State of California is 15.2o C—almost exactly the same as the average temperature of the Canadian city of Abbotsford, British Columbia (15oC). Yet no-one would suggest that California’s climate is uniform from top to bottom of its 1,240-km length, or that the weather over the year in Bakersfield has much in common with Abbotsford’s. On the day I wrote this, some actual temperatures in Califoria were reported as between 12 and 26oC (Los Angeles) and 5 and 22oC (Shasta); Abbotsford was experiencing temperatures between 4 and 11oC. In the California cities, the day might have passed through the ‘average’ for a few minutes in the morning and evening; but in neither country—nor any other on earth—did day hover for 24 hours at an ‘average’ temperature.

The ‘average’ tells you about the middle-point of what we experience. It doesn’t tell us anything useful at all about the extremes of what we encounter. And it’s not the averages that kill you. It’s the extremes that do that. Consider Montana, where a reading of -52oC prompted headlines shrieking ‘Colder than Mars!’ (which was true, if you picked the warmest spot on the red planet to compare it to). Even so, Montana will probably end the year recording an average temp over that period of something close to its cool but entirely tolerable average of 5.9oC (42.7oF).

Thus does the mathematical fiction obscure dangerous realities. The extremes of weather — the hots and colds, the wets and dries, even the windy days (if not the still ones) — can all change very dramatically, becoming more unpleasant, destructive or even life-threatening, without the difference showing up in the average at all.

Let me illustrate the point with the following series of hypothetical high and low temperatures (all figures in Celsius): 27o/-7o, 42o/-24o, 54o/-36o.

The first pair, highs of 27oC and lows of -7oC, is the actual range between the (average!) highest temperatures in July and coldest ones in January in the city of Toronto, where the average annual temp is 9oC. The subsequent pairs represent alternative weather futures. In the first, July reaches average daily highs of 42oC (common today in places like Australia, central India, and Arizona) and winters dip to average nightly lows in January of -24oC. The second is even more daunting: July afternoons sizzle at 54oC, while January nights shiver at -36oC.

This might all happen and yet Toronto’s ‘average annual temperature’ would not have budged a milli-degree to either side of its historical 9oC. That is how averages work, and it is the danger in being lulled by what seem like minor wobbles in their values (Toronto’s 9oC is a development of the last decade; the average between 1971 and 2000, when more winters were like this one, was 8.5oC).

It’s extremes that kill, not the averages. While central and eastern North America were suffering some of the most brutal cold those regions had felt in decades, Argentina and Australia were sweating through some of the hottest weeks that either southern nation had ever witnessed. Temperatures of 36oC crashed Argentina’s power gird,5 leaving citizens without air conditioning on the steamiest days; the hottest year on record in Australia6 produced wildfires that stretched for hundreds of kilometers.

And while earth’s average temperature is rising by barely perceptible increments, the wild extremes of earth’s weather are increasing with impacts hard to ignore. The reason is that heat is more than just that agreeable sensation we get lying on the beach on a sunny day.

Heat is the food on which weather feeds. It is the fuel that drives almost everything else that moves in the climate system (differences in ocean water salinity also play a role). When more heat is captured in the earth’s atmosphere, the effect on weather is like switching from regular to high-octane gas. The extra energy amps up evaporation of water from oceans and lakes — putting more of it into the atmosphere to fall back down when the air temperature drops below the dew or frost-point. More heat gives an extra push to the winds spiralling into the cone of a tornado or eye of a hurricane.

It could even re-arrange our weather entirely, pushing the whole planetary perpetual motion machine into a different configuration. In that alternative pattern, seasonal monsoon winds like those that water southern California and all of India, could blow ashore at different places, or times, or not at all. Powerful ocean currents like the one that gives Ireland a temperate climate at odds with its latitude, might move away, or simply shut down. Earth’s climate has gone through these kinds of phase-shifts from one equilibrium condition to another before — sometimes over alarmingly short periods of decades.

This was explained to me by one of Canada’s leading climate scientists, University of Victoria oceanographer Andrew Weaver, who shared in the Nobel Prize for contributing to the Intergovernmental Panel on Climate Change’s fourth report on that subject, and is now a Green member of the legislature in his home province of British Columbia. His metaphor for how we experience climate was a marble rolling back and forth in the bottom of a round bowl.

As it rolls, the marble (that’s our daily weather) repeatedly runs up one side of the bowl before it falls back down to roll across the bottom and up the other side. The bottom of the bowl is the marble’s ‘average’ location. But think of the bowl’s sides as representing weather’s extremes: its ‘snowy’ side, or ‘hot’ side, its ‘wet’ or ‘droughty’ side; most of the time the marble is in one of those zones.

Now here’s what the extra heat energy in the climate system is doing: it’s driving the marble further up the sides of the bowl. Further up the hot side, but further up the cold side too; up the dry and the wet sides.

So what happens when the extra heat drives the marble right up over the edge and out of the bowl entirely?

Well that, Weaver told me, is what we don’t know.