Keeping the Good News Down

Feeling low about the climate future? Wondering, as punk rocker-turned-energy-reporter Geoff Dembicki asked in a recent series of stories, “Are we screwed? 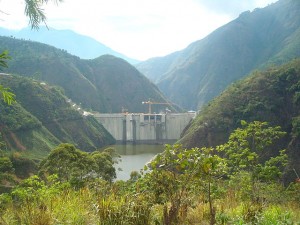 If you live in the Anglosphere you are being deprived of much of the good news about our future prospects, writes Chris Wood. Above, the Pirris Hydro dam in Costa Rica, where 100% of electricity this year has come from renewables. Creative Commons

No, we’re not (necessarily).

But if you live in the Anglosphere — and if you’re reading this, that’s pretty likely — you are being deprived of much of the good news about our future prospects.

In Britain, Canada, the United States and Australia, leaders in power constantly warn us that if we do anything to move away from fossil fuels we can kiss our economy — that is, stuff like jobs and paycheques — goodbye.

Now we learn that the media in the English-speaking world has been persistently ignoring the far more hopeful truth.

Almost the only figure in political power in any of the four big English-speaking countries not participating in this campaign of misery-mongering misdirection is United States President Barack Obama. But his country’s Congress is controlled by majorities hostile to the reality of climate physics and indifferent to the costs that an unstable climate is already imposing on their nation’s economy. (Hey guys: any of you been to California lately?)

The ministers leading majority governments in Canada and Australia have ruled out constrains on those countries’ massive production of high-carbon oil and coal respectively, as unacceptable threats to their economies. Canada’s government has gone so far as to characterize any dissent from full-throttle output of synthetic crude from its tar sands, as a national security threat on par with Islamic terrorism.

With an election looming in May, Britain’s Prime Minister David Cameron buffed his green credentials by signing an all-party declaration in February (rather bizarrely entitled “Show the Love”) acknowledging climate change as “one of the most serious threats facing the world today,” and promising “to accelerate the transition to a competitive, energy efficient low carbon economy.” His critics point out a disconnect from his government’s ongoing support for fossil fuel exploration, among other policies. Britain’s Chancellor of the Exchequer, meanwhile, has said that stabilizing the climate oughtn’t to be allowed to raise the price of British products — including oil.

In short, to listen to almost anyone in power in Canada, Australia, Britain or the United States — except the embattled resident of the White House — we pretty much are screwed. Yeah, burning oil and coal and gas is destabilizing the climate, disrupting the weather we’ve become adapted to over centuries. But suck it up folks. The alternative is you lose your job and the economy flushes down the toilet. 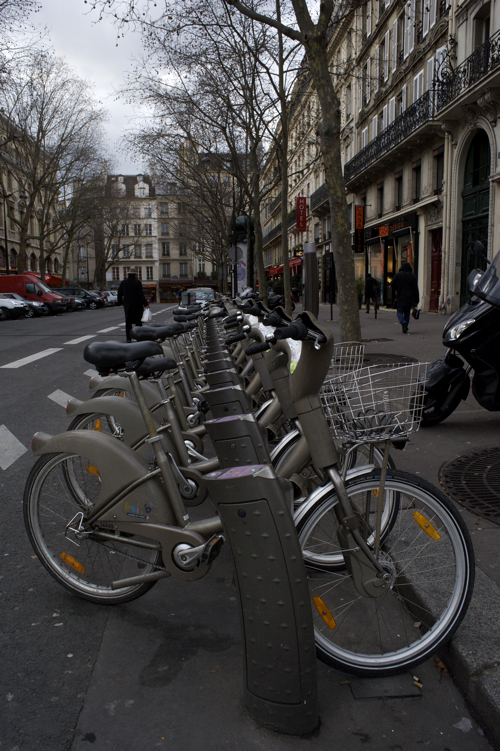 The reality is that on climate action, we really can have our cake and eat it too, argues Chris Wood. Above, share bicycles in Paris. © Deborah Jones 2015

This is untrue. But you could be excused for believing it.

What little reporting that residents of the Anglosphere get about our climate challenge is overwhelmingly cast in “doom-laden” terms. The economic opportunities that crisis is creating get little attention — far less the fascinating and hopeful innovations being realized

Researchers from Britain and the United States report this month in Nature Climate Change that both old and new media in the United States (which by default provide much of Canada’s news) and Britain (which shares much of its media ownership with Australia), framed their coverage of the latest report from the Intergovernmental Panel on Climate Change in terms mainly of ideological controversy, rather than as settled science, and in negative narratives of disaster and insecurity — seldom as opportunity.

Yet opportunity does exists. Great opportunity. It is simply not much reported. And our political leaders frankly deny its existence.

The truth? Not only do we not need to choose between jobs and a stable climate, acting aggressively on climate would actually be good for jobs and incomes.

The German New Climate Institute recently calculated, using data from the International Energy Agency, that taking the steps necessary to hold global climate warming to under 2oC (or slightly more than twice as much disruption as we’ve experienced so far) would save the EU $173 billion in fuel costs by 2030, create 420,000 news jobs in clean energy, and save 46,000 lives.

Putting the United States on the same path would create 650,000 additional jobs (roughly the number created during four months as its economy rebounded from recession last year), and avoid 27,000 deaths.

The findings echo those of the International Monetary Fund, which found last year that if the world’s top 20 greenhouse gas-emitting nations — all four of the Anglosphere Bigs among them — adopted carbon prices averaging $57.50 a ton, their combined economic output would grow by four percent

That’s at the macro- scale. Let’s get down to sectors.

Germany — cold and cloudy and full of 80 million consumers — generated nearly a third of all its electricity in the first half of last year from renewable sources, mainly solar photovoltaic generation. For a while in June, that peaked above 50 per cent.

And already this year Costa Rica — admittedly tiny, with relatively modest demand but also not much territory to work with — got every single kilowatt of its electricity from renewable sources for more than two months straight (to be exact, 75 days).

That renewable generation didn’t come from the void. It takes equipment, installations and maintenance to generate electricity from the sun or wind or water flows, just as it does to get it from fossil fuels. It takes companies to build and supply that gear and services. It takes people. Working people.

And the non-fossil energy economy — unlike the carbon-fuel economy — is growing. The United States Department of Energy has estimated that the wind-power sector alone could supply a tenth of American’s end-use electricity needs within five years, and 35% by 2050.

Utility-grade electricity is leading the retreat from fossil energy. But transportation fuels, often raised by post-carbon nay-sayers as the nut that can’t be cracked by wind or sunshine, are in researchers’ sights.

Companies working to reduce the price of so-called ‘drop-in’ liquid fuels from algae have slashed their unit costs by an astounding factor of 30 within just 36 months. The result is still the equivalent of US$7.50 a gallon bio-gasoline. But like wind and solar, the trend line is unmistakable and the feasibility of an algae farm-raised fill-up is irrefutable.

One group is even tackling a two-birds challenge, demonstrating technology that could fuel America’s entire enormous fleet of not-especially-efficient transport semi-trailer trucks for up to a week from reprocessing its waste plastics. (Okay, this is not strictly speaking a renewable energy initiative, but it does at least squeeze the most out of the roughly seven percent of US oil production directed into plastics.)

And while legacy and web media alike may be keeping the average citizen of the Anglosphere in the dark about the upside of controlling climate instability, the one percent is increasingly aware of these opportunities. The collapse of oil prices in 2014 didn’t discourage investors from putting an estimated $270 billion into renewable energy plays last year — a figure only slightly below the $279 billion record set in 2011.

Strikingly, among the ten countries whose investors last year led the world in sunrise energy instead of sunset fuels, according to the U.N. and Bloomberg Energy Finance, were the United States and Canada. Britain was lumped in with Europe, also in the top ten.

The smart money is on smart, clean energy. Which makes the story Anglophones are hearing from their media and politicians all the more suspect.

The political leaders of the English-speaking world, with singular exceptions, insist there’s no such thing as free lunch: you want a stable climate, forget your stable livelihood. Yeah, you’re screwed.

They are, charitably, out of touch with the reality. The reality is that on climate action, we really can have our cake and eat it too.

The economic gains from limiting global warming to 2oC: http://newclimate.org/2015/03/27/indc-cobenefits/

Earth getting greener, despite deforestation