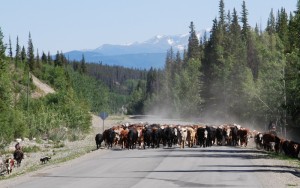 United Nations demographers forecast1 that by mid-century — in 37 years — there will be more than nine billion humans on the planet, about two billion more than the roughly seven billion of us now.

This, as we say in Canada, is dreaming in technicolor. It very nearly cannot, and almost certainly will not, actually happen. Instead, the realistic forecast is for widespread famine, plummeting birth and infant-survival rates, and stalling, then falling, human populations.

To the extent that this grim outlook can be avoided, and our numbers come even close to the U.N.’s dewey-eyed prediction, it will be through the efforts of men and women like those I spent a day with recently. They are people for whom names like Monsanto and Walmart are not dirty words.

They are the professionals of big agriculture in Canada, one of a handful of nations that collectively supply more than half of the most important commodities traded in the world’s billion-dollar-a-minute ($1.3 trillion a year) exchange of calories for money. Much of the world’s food already passes through the hands of these sorts of folks. Their ability to achieve prodigious increases in the productivity of dirt is all that stands between the next two generations of humanity and hunger on vast scale.

The event was a day-long seminar presented by an Ontario investment fund, Bonnefield Financial, on the future of Canada’s farmers—better understood as a $48 billion-a-year domestic industry embracing everything from sod growers to vendors of specialized machinery for picking potatoes out of rocky soil and spitting back the stones. Present were agricultural economists and investors’ agents, farmer-entrepreneurs supplying sophisticated, high-value products to demanding global customers, and financial innovators busy figuring out new ways to inject capital into an increasingly capital-intensive industry. (I spoke to the group at the end of the day, with UBC professor Hans Schreier, about water—a subject on which we’ve collaborated.)

Old Macdonald was not in the audience. But Old Macdonald, with his nursery-school red barn and white fenced yard of smiling pigs and curly-haired sheep are not about to keep even our present numbers fed—let alone another two billion of us.

That figure represents an imagined increase of roughly 30 per cent in human numbers, but implies an increase in human food consumption of at least twice that scale. The reason, mainly, is meat.

As more of humanity becomes wealthier in places like Latin America and Asia and even Africa, the one universal shift in consumer tastes is a rising demand for meat. Putting 1,000 calories of steak on the plate, however, can take up to fifteen times more land and water than the same food value in peas or potatoes.

Put the growing numbers of humans on the planet together with expanding appetites for meatier meals — and then hope to bring even minimally adequate nutrition to the roughly one billion people who are already here and hungry — and you arrive at an actual need for up to twice as much food by 2050 as the world produced in 2012.

Humanity has doubled and redoubled its food production before. But it’s getting harder. Our species is running up against the limits of available arable land. The returns to selective breeding and its 21st century equivalent, genetic modification, are declining. Not even Monsanto, I heard from the experts at the seminar, is forecasting big new gains in farm yields from miracle genetics.

Five countries stand in the way of global starvation

We’re also on the verge of losing some our most important existing food sources — implying that we’ll need to make those up from production gains elsewhere. Droughts, floods and heat waves more often threaten the yearly harvest across entire breadbaskets: the U.S. south and mid-west; Russia and the Ukraine; India’s Punjab. Our only significant non-farm source of food calories — the world’s oceans — are being driven to exhaustion by over-exploitation and pollution.

Food is fundamental to natural security. The amount that any country can produce of it, in relation to its needs, can be expressed in a general way like this: (land+water)/people = enough/not enough food.

Places with lots of people and not much land or water, like Singapore, say, produce a tiny portion of the food they need. But countries can also have a fair bit of both land and water, but still have so many people they struggle to harvest enough food to feed them all: China, India. Still others have land but not the water (Egypt); or water but no land that isn’t already spoken for (France).

For a country to produce surplus calories for export, it needs to have the ‘Goldilocks’ combination of arable land, fresh water, and few enough people to leave a surplus from domestic harvests for sale to others (a low “population to arable land ratio”).

In all the world, only about half a dozen countries have those Goldilocks qualities: Argentina, Brazil, Canada, Russia and the United States. And even in several of those, a variety of climate and other environmental limits loom. (In Canada’s case: warmer days are nice, but much of what’s getting warmer is unfarmable rock or muskeg, while the country’s biggest export crops — grains and meats — are grown in places where declining water supplies are already maxed out.)

Locavore and farm-to-market movements bring desirable qualities to indulgent local consumers. But they cannot feed the hundreds of millions of people living in dry and crowded places like the eastern Mediterranean basin now — and they certainly will not be able to in the future. Many of those places (most of the Arab Middle East) count on industrial-scale harvests in the Goldilocks nations today. Their dependence will only grow.

But even Goldilocks countries will need to grow more in every field if humanity’s story is going to avoid a tragic ending. And optimists at the seminar felt we can get at least part way there with what might be called the ‘just right’ theory: finely tuning every aspect of a farm’s operation to maximize the yield from every one of its plants.

One speaker at the event described how software, running on the laptops and on-board GPS that are now standard on most tractors, varies the application of everything from individual seeds to fertilizer to suit conditions in the precise few square inches of field where each is applied. The optimal attention maximizes harvest, lowers costs, and reduces wastes like greenhouse gasses and excess nutrients in local streams. His Canadian company works with the likes of Walmart (which has set its food suppliers a steep course of escalating sustainability objectives) and farm operators in Russia and South America, to get the most out of their fields.

It’s an open biological question whether ever-more intensive, larger-scale farming of every available hectare of Earth-dirt can keep our food supply ahead of the busy procreation and additional mouths that it also enables. It’s an open moral debate whether even the prospect of mass human mortality justifies the attempt to feed ever more of us.

But armed with ingenuity and the 21st century’s signature farm technologies of computer power and satellite imaging, some folks are ready to give it a go.