From Lima to Burnaby: the ‘Glocal’ Response to Climate 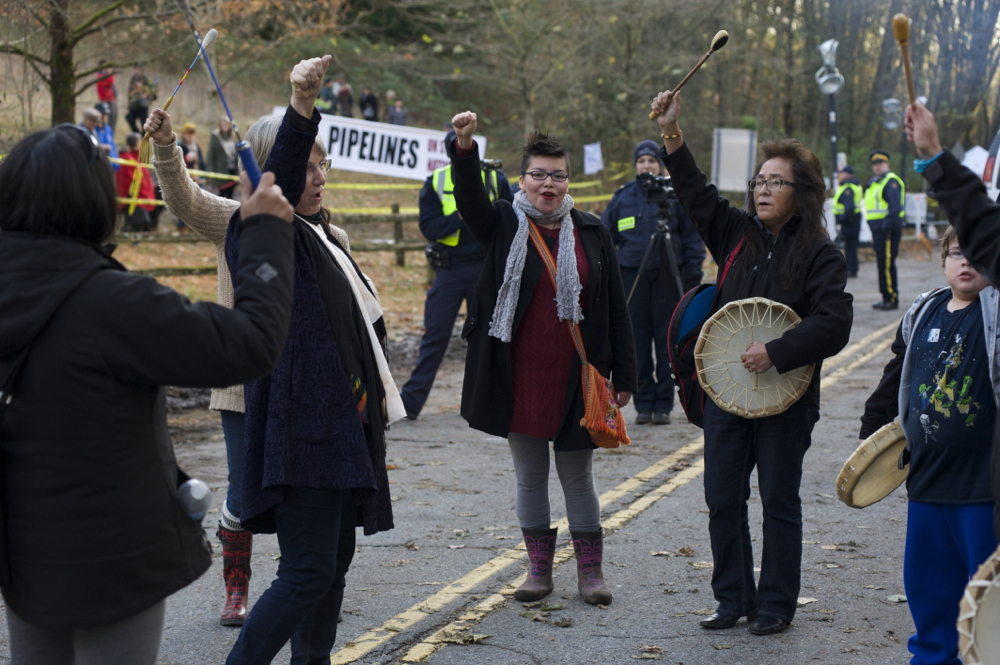 Police were called to keep protesters away from a drill rig used by Kinder Morgan to test for a new oil sands pipeline route through Burnaby Mountain, near Vancouver. © Deborah Jones 2014

‘Glocal’ is an ugly word for an often ugly process. It was coined to capture the way that global dynamics and networks touch down in the intimate spaces of neighbourhoods and family lives, as well as how the citizens of those places respond — adopting, adapting or resisting the global tide.

Currently, events taking place at two points on the Pacific rim of the Americas have been resonating for me in the realm of the glocal. One has been, and the other shortly will take place in coastal cities, squeezed between the mountain rock and the deep blue sea. As participants in both events might agree, the settings aptly capture humanity’s situation.

In Lima, Peru, negotiators will meet to try to reach a draft global agreement, setting targets binding on their governments that will halt the rise in atmospheric CO2 concentrations that is driving the planet’s increasingly disruptive weather extremes. These discussions will be awash with numbers.

Only one is really important: 450. That is the number of parts (in their CO2 equivalent) of greenhouse gasses that can mix with a million other parts of nitrogen, oxygen and other gasses in the atmosphere, and still give what scientists are pretty sure will be better than heads-or-tails odds of keeping the planet within two degrees C of its pre-industrial temperature.

At our present rate of burning fossil fuels, we will roar through that cap at full throttle in about the lifetime of a new car bought today: 450 ppm in 2034.

But that number will soon be lost in a fog of diversionary accounting.

The technical issues facing the Lima negotiators make the Manhattan Project look like a pre-schooler’s Lego set. There is arcane but richly detailed debate over how to account for the emissions we’re all releasing right now, what ‘path’ to adopt to arrest them in time, how to determine which countries will ‘sacrifice’ how much in making emission reductions, how to oblige nations to keep their promises, and how to catch and punish them if they cheat.

These will be expressed and marketed to a baffled public largely in clouds of numbers: impressive percentage reductions promised in unstated emissions compared to some arbitrary prior year; decontextualized figures of staggering hugetude — giga and terra-tons, terra-tons, of invisible ‘weightless’ gasses; targets sliding around time and across the geography of the developed and the undeveloped world; reductions to be booked today from tomorrow’s yet-to-be-invented technologies.

If devils live in details, there will be an entire hobgloblinery here of opportunities for fudge, delay and obfuscation. Moreover, the IPCC has given political leaders a frail but exploitable scientific reed with which to justify yet more delay.

While 450 ppm is the ultimate ‘safe line’ for atmospheric carbon, there is still, the scientists informed the politicians, a narrowly positive chance of preserving survivable climate conditions even if we overshoot that number between now and mid-century, so long as by then we have also ratcheted our emissions back to about 2010 levels — and we continue to cut them to zero by the end of the century.

That’s like setting out to drop 25 pounds by agreeing with yourself that you can gorge on ice cream for the first month, put on another 10 pounds, and diet all the harder later. And I give it about the same chance of success.

My jaded prediction is that the world’s leaders, provided with enough numbers to conceal most of their national GDPs and Swiss bank accounts, will opt instead for numeric slight-of-hand and a punt down the road. Whatever numbers emerge from Lima, even if they are subsequently adopted, let alone taken on as ‘binding’ (as Canada’s Kyoto commitment was, until it wasn’t), they will not be sufficient.

Which is why the other event on the Pacific Rim over the last couple of weeks may be more significant. Overlooking another city squeezed between rocks and a wet place, Burnaby Mountain is a mini-me beside its sibling peaks in Canada’s Coast Mountain ranges. For the last month however, it has been a contested high ground.

Kinder Morgan, a Houston-based pipeline company, is seeking approval to lay a new and larger pipeline alongside an existing one it owns between Alberta and Pacific tidewater. The purpose of the new capacity is to convey an additional half a million barrels a day of diluted tarsand bitumen for shipment to Asia. In that process, Kinder Morgan contractors have sought to survey a route for the proposed pipeline across the small urban mountain that’s home to Simon Fraser University and overlooks both Burnaby and its larger neighbour, Vancouver.

They have been met by persistent demonstrations of resistance. These have been, on the whole, charmingly Canadian. The Royal Canadian Mounted Police are reported to have been almost apologetic as they rounded up demonstrators under terms of an injunction issued to the pipeline company. Later, demonstrators posted compassionate notes to facebook about the difficult role the police have to play. A court threw out charges against the arrested in any case. And Burnaby’s mayor is outspokenly in the camp of those who object that Kinder Morgan’s plan will expose his city to risks out of proportion to its benefits.

But here’s the irony in the glocal.

The forces ranged against the Burnaby Mountain demonstrators embody all the orders of power within the neoliberal client state: Canada’s national government and its provincial counterpart have both gutted their environmental laws to ease the way for hydrocarbon projects like the pipeline. Kinder Morgan, according to its website, is “the … third largest energy company (based on enterprise value) in North America.” And somewhere in the background are the global bankers, fingers on the keys calculating the vig on $5.4 billion, the starting estimate of what it will cost to build the pipeline.

And yet, there is a very good chance that the Burnaby Mountain demonstrators will win, and the pipeline will be stopped.

A better chance, frankly, than that the leaders of the worlds’ nations will agree to much more in the coming year than a misty flim-flammery of mostly aspirational and easily gamed numbers, that work out to something a whole lot more than 450 ppm of CO2 in the air.

The atmosphere can’t be flim-flammed. We should take the wins wherever they come.