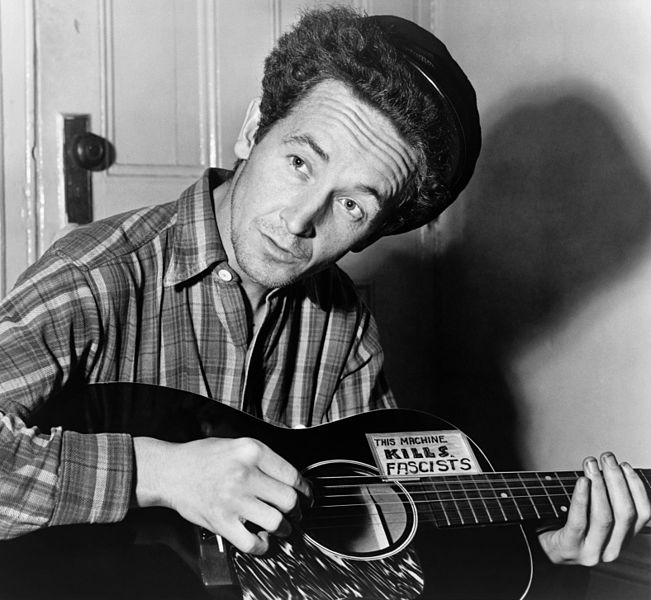 In December 1950, Woody Guthrie signed his name to the lease of a new apartment in Brooklyn. Even now, over half a century later, that uninspiring document prompts a double-take.

Below all the legal jargon is the signature of the man who had composed “This Land Is Your Land,” the most resounding appeal to an equal share for all in America. Below that is the signature of Donald Trump’s father, Fred. No pairing could appear more unlikely.

Guthrie’s two-year tenancy in one of Fred Trump’s buildings and his relationship with the real estate mogul of New York’s outer boroughs produced some of Guthrie’s most bitter writings, which I discovered on a recent trip to the Woody Guthrie Archives in Tulsa. These writings have never before been published; they should be, for they clearly pit America’s national balladeer against the racist foundations of the Trump real estate empire.

Recalling these foundations becomes all the more relevant in the wake of the racially charged proclamations of Donald Trump, who last year announced, “My legacy has its roots in my father’s legacy.”

By the time he moved into his new apartment, Guthrie had traveled a long road from the casual racism of his Oklahoma youth.

He’d learned along the way that the North held no special claim to racial enlightenment. He had written songs such as “The Ferguson Brothers Killing,” which condemned the out-of-hand police killing of the unarmed Charles and Alfonso Ferguson in Freeport, Long Island, in 1946, after the two young black men had been refused service in a bus terminal cafe.

In “Buoy Bells from Trenton,” he denounced the miscarriage of justice in the case of the so-called “Trenton Six” – black men convicted of murder in 1948 by an all-white jury in a trial marred by official perjury and manufactured evidence.

And in 1949, he’d stood shoulder to shoulder with Paul Robeson, Howard Fast and Pete Seeger against the mobs of Peekskill, New York, where American racism at its ugliest had inspired 21 songs from his pen (one of which, “My Thirty Thousand,” was recorded by Billy Bragg and Wilco).

In the postwar years, with the return of hundreds of thousands of servicemen to New York, affordable public housing had become an urgent priority.

For the most part, low-cost housing projects had been left to cash-strapped state and city authorities. But when the Federal Housing Authority (FHA) finally stepped in to issue federal loans and subsidies for urban apartment blocks, one of the first developers in line, with his eye on the main chance, was Fred Trump. He made a fortune not only through the construction of public housing projects but also through collecting the rents on them.

When Guthrie first signed his lease, it’s unlikely that he was aware of the murky background to the construction of his new home, the massive public complex that Trump had dubbed “Beach Haven.”

Trump would be investigated by a U.S. Senate committee in 1954 for profiteering off of public contracts, not least by overestimating his Beach Haven building charges to the tune of US$3.7 million.

What Guthrie discovered all too late was Trump’s enthusiastic embrace of the FHA’s guidelines for avoiding “inharmonious uses of housing” – or as Trump biographer Gwenda Blair puts it, “a code phrase for selling homes in white areas to blacks.” As Blair points out, such “restrictive covenants” were common among FHA projects – a betrayal, if ever there was one, of the New Deal vision that had given birth to the agency.

Only a year into his Beach Haven residency, Guthrie – himself a veteran – was already lamenting the bigotry that pervaded his new, lily-white neighborhood, which he’d taken to calling “Bitch Havens.”

In his notebooks, he conjured up a scenario of smashing the color line to transform the Trump complex into a diverse cornucopia, with “a face of every bright color laffing and joshing in these old darkly weeperish empty shadowed windows.” He imagined himself calling out in Whitman-esque free verse to the “negro girl yonder that walks along against this headwind / holding onto her purse and her fur coat”:

For Guthrie, Fred Trump came to personify all the viciousness of the racist codes that continued to put decent housing – both public and private – out of reach for so many of his fellow citizens:

And as if to leave no doubt over Trump’s personal culpability in perpetuating black Americans’ status as internal refugees – strangers in their own strange land – Guthrie reworked his signature Dust Bowl ballad “I Ain’t Got No Home” into a blistering broadside against his landlord:

In 1979, 12 years after Guthrie had succumbed to the death sentence of Huntington’s Disease, Village Voice reporter Wayne Barrett published a two-part exposé about Fred and Donald Trump’s real estate empire.

Barrett devoted substantial attention to the cases brought against the Trumps in 1973 and 1978 by the Civil Rights Division of the U.S. Justice Department. A major charge was that “racially discriminatory conduct by Trump agents” had “created a substantial impediment to the full enjoyment of equal opportunity.” The most damning evidence had come from Trump’s own employees. As Barrett summarizes:

According to court records, four superintendents or rental agents confirmed that applications sent to the central [Trump] office for acceptance or rejection were coded by race. Three doormen were told to discourage blacks who came seeking apartments when the manager was out, either by claiming no vacancies or hiking up the rents. A super said he was instructed to send black applicants to the central office but to accept white applications on site. Another rental agent said that Fred Trump had instructed him not to rent to blacks. Further, the agent said Trump wanted “to decrease the number of black tenants” already in the development “by encouraging them to locate housing elsewhere.”

Guthrie hardly meant this as a compliment. But the Trumps – father and son alike – might well have been arrogant enough to see it as one. After all, if you find yourself “way ahead of God” in any kind of a race, then what else must God be except, well, “a loser”? And we know what Donald Trump thinks about losers.

One thing is certain: Woody Guthrie had no time for “Old Man Trump.”

We can only imagine what he would think of his heir.

Will Kaufman is Professor of American Literature and Culture, at the University of Central Lancashire. This article was originally published on The Conversation. Read the original article.