Turner Prize must not restrict Assemble to ‘art’

The coveted Turner Prize 2015 was awarded December 7 to the collective Assemble, in the first time the £25,000 prize prize was awarded in Scotland, and to a group working in with communities on “a ground up approach to regeneration, city planning and development in opposition to corporate gentrification,” said  Tate Britain.

“They draw on long traditions of artistic and collective initiatives that experiment in art, design and architecture. In doing so they offer alternative models to how societies can work,” said the statement. To help me take stock of Assemble’s Turner Prize win I revisited a lecture by 2003 Turner Prize winner Grayson Perry, delivered in Liverpool in 2013. In it, Grayson offers guidance for discerning the boundaries of contemporary art. These include: Is it in a gallery? Is it made by an artist? And the “themepark + suduko” test; does it shock and make us think?

These boundaries have been getting less and less obvious over recent decades, but it will still have surprised many that a group of young architects won the UK’s most prestigious prize in contemporary art – for a project refurbishing houses in Liverpool.

Assemble are a creative collective and the judges saw their work as sitting in a long tradition of collective art practice. I’m not sure Grayson’s markers of contemporary art are satisfied here, but he offers reassurance that art is a “baggy idea”.

In the series of projects in Granby, South Liverpool, that attracted the attention of the Turner Prize, Assemble worked with local people to redevelop the area in a way that was meaningful to them, using its existing buildings. Their client is Granby 4 Streets Community Land Trust.

Assemble became a major player in a successful urban regeneration project, in an area that had been left to decay for a generation. Initiatives which might have seen these streets re-invigorated or replaced had been tabled before but none came to fruition. So this is a very significant project worthy of recognition by a major national award, although an art prize may seem surprising. 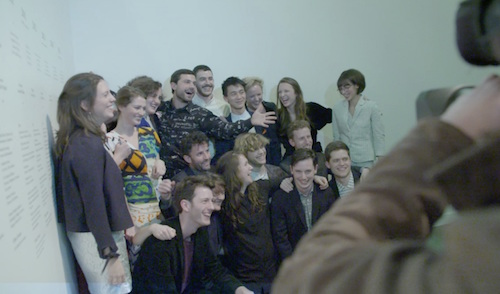 Assemble, at the awarding of the Turner Prize. Photo by Tate Britain

But work in this field definitely can be art. Alongside the success of Granby, Liverpool is significant for having other successful Community Land Trusts (CLT). These organisations are run by ordinary people to develop and manage assets important to their community. 2Up2Down, for example, was a project consciously defined as art and part of the Liverpool Biennale. Artist Jeanne van Heeswijk worked with local people in Anfield to re-imagine their area. Over several years this project grew into a thriving co-operative bakery, HomeBaked and a CLT which is now developing affordable housing.

At a CLT network event in 2014, people from around the country talked about the importance of community-based work in moving from “protest to action”. In Granby, the initial “action” by local residents was guerrilla gardening and painting abandoned houses. Later, a market was set up and a CLT was established. Eventually, working with social investor Steinbeck Studio, the CLT commissioned Assemble for their collaborative approach, to develop and communicate a homegrown vision for the area; together.

Now, the first houses are ready to be homes again and Assemble are still working in the area and collaborating with the people there. Whether or not you see it as art, it is refreshing. Participatory design is not always respected within architecture. But the Assemble approach doesn’t neglect architectural quality. The collective prioritises a real sensitivity that enables excellent design and aspiration while remaining open to collaboration with the communities in question.

In addition to their built work, Assemble have established a social enterprise called Granby Workshop. The workshop uses demolition material to create hand crafted items and profits support an initiative engaging local young people in creative and practical projects. So, using their skills as designers and makers they address issues not always considered to be in the realm of architecture.

Whilst Assemble initially seemed slightly uncomfortable by the Turner nomination, their nature as an art and design collective suggests they were never bothered by the boundaries between art and architecture. They might fit into the breed of new architects that Rory Hyde describes as “operating beyond their ability as design professionals … forging a new era of civic responsibility and ethical entrepreneurialism”.

Such an approach requires architects to be excellent designers of course but also good communicators, and listeners. There has to be a sensitivity to the different needs and aspirations of different places and the creativity and confidence to try new things. This is a very artistic kind of sensibility.

Within my third-year undergraduate design studio, we’re exploring collaborative working, and other studios place emphasis on making, using traditional or new technologies. And practising what we preach, Head of Liverpool School of Architecture Andrew Crompton and I contribute to the advisory board relating to Ducie Street, the last remaining row of derelict terraces in Granby. It’s exciting to be involved in a new era, working with Steinbeck Studio and Assemble, on a different approach to development. Liverpool is proving to be a test bed for such projects.

Pleased as I am that the spotlight is now on Assemble and their place and people sensitive approach, there is still a niggling concern at the blurring of boundaries. I can’t help thinking that perhaps the “art” label designates Assemble and the Granby project as an outsider, unique, not something that can be replicated.

Grayson recounts how he felt when someone questioned his insistence that his TV programmes were not art but TV: “I wanted to hit her over the head with my BAFTA.” Assemble’s work in Granby may be art practice but it is also a successful approach to the provision of affordable housing and urban regeneration in an area where many projects have failed. So it is not only successful as art but measured on its own terms as architecture and urban regeneration. The Turner Prize must not allow an excuse to ignore this success.

Assemble describe themselves as “seeking to address the typical disconnection between the public and the process by which places are made”. This is a critical point which strikes at the heart of discontent about our urban environments and it is a goal that must be allowed to have influence beyond the art world.

Emma Curtin is an Architect and University Teacher at the University of Liverpool.  This article was originally published on The Conversation. Read the original article.