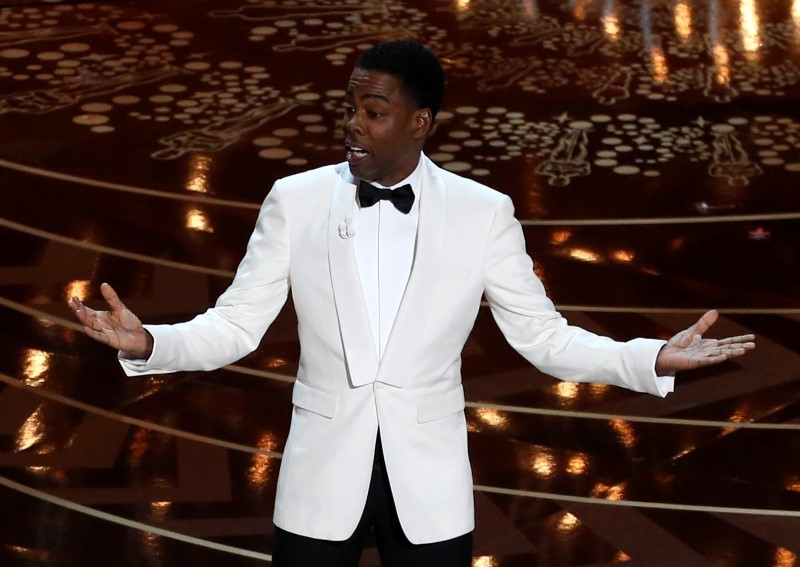 LOS ANGELES (Reuters) – Catholic Church abuse movie “Spotlight” was named best picture, the top award at Sunday’s Oscar ceremony, after an evening peppered with pointed punchlines from host Chris Rock about the #OscarsSoWhite controversy that has dominated the industry.

Mexico’s Alejandro Inarritu nabbed the best directing Oscar for “The Revenant”, taking home the trophy for the second straight year after winning in 2015 for “Birdman.”

“The Revenant” had gone into Sunday’s ceremony with a leading 12 nominations, and was among four movies believed to have the best chances for best picture after it won Golden Globe and BAFTA trophies.

“I (am) very lucky to be here tonight but unfortunately many others haven’t had the same luck,” Inarritu said, expressing the hope that, in the future, skin colour would become as irrelevant as the length of one’s hair. 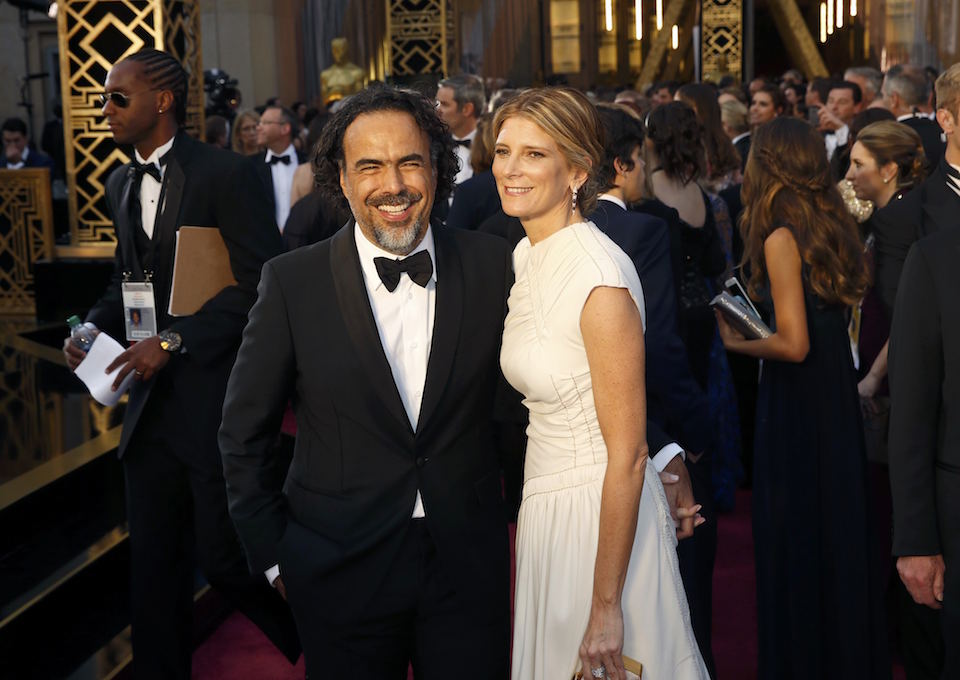 Alejandro G. Inarritu, nominated for Best Director for his film “The Revenant”, arrives with his wife Maria Eladia Hagerman at the 88th Academy Awards in Hollywood, California February 28, 2016. REUTERS/Lucas Jackson

Leonardo DiCaprio got a standing ovation after finally winning his first Oscar for his leading role as a fur trapper left for dead in “The Revenant” and spoke out on climate change in his acceptance speech. 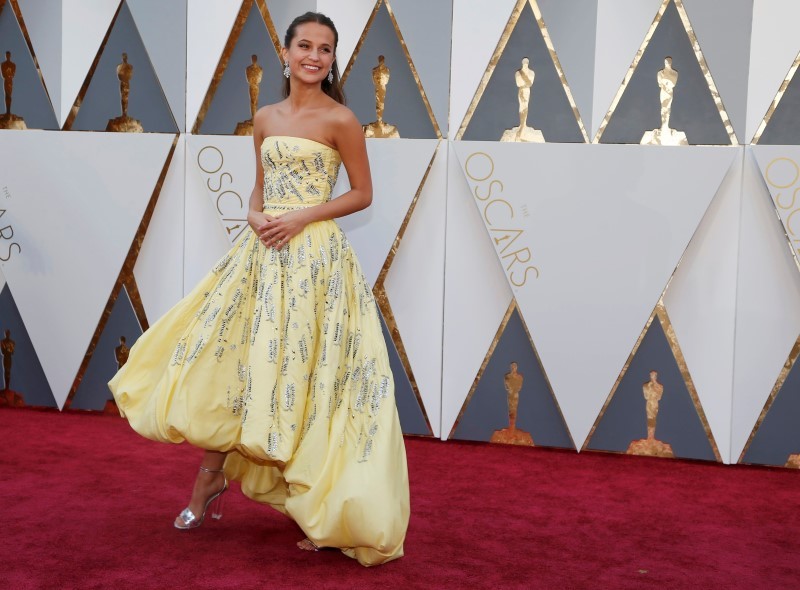 Rising star Brie Larson, 26, took home the statuette for best actress for her role as an abducted young woman in indie movie “Room” to add to her armful of trophies from other award shows.

Racial themes and barbs about the selection of an all-white acting nominee line-up for a second year ran throughout the evening as black comedian Rock opened the show that he called “the white People’s Choice awards.”

Warner Bros <TWX.N> “Mad Max: Fury Road” started the night with 10 nominations and the action-adventure won a slew of Oscars, including for costume, make-up, editing, and production design. 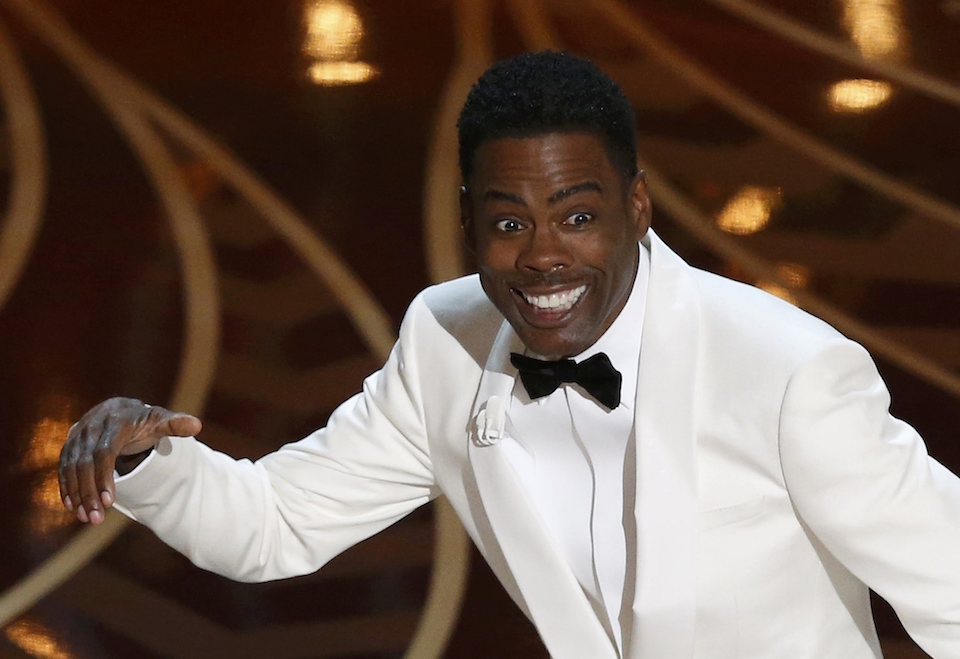 LOS ANGELES (Reuters) – The 88th Academy Awards, the highest honours in the movie industry, were handed out a ceremony in Hollywood on Sunday hosted by comedian Chris Rock.

Following is a list of winners in key categories for the awards, also known as the Oscars.

“Writing’s On The Wall” from “Spectre” 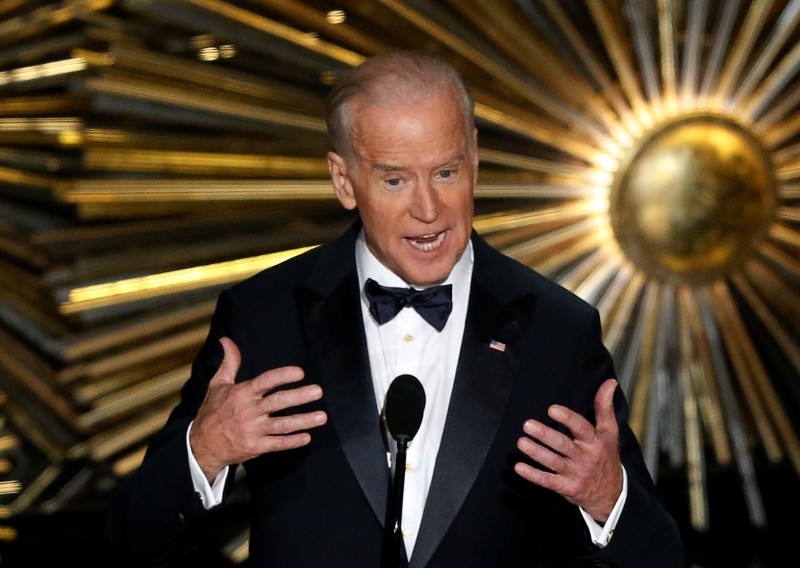 LOS ANGELES (Reuters) – Vice President Joe Biden made a special appearance at the Oscars ceremony on Sunday to advocate for victims of sexual assault and introduced a powerful performance by Lady Gaga that featured survivors of sexual abuse.

Biden came on stage to rousing applause, quipping “I’m the least qualified man here tonight” before he addressed the issue of sexual assault.

“Despite significant progress over the last few years, too many women and men on and off college campuses are victims of sexual abuse,” Biden said.

He then asked the audience to join him, President Barack Obama and survivors of abuse in taking the pledge to “intervene in situations when consent has not or cannot be given.”

“We must and we can change the culture so that no abused woman or man – like the survivors you see here tonight – ever feel like they have to ask themselves, ‘What did I do?’ They did not do anything wrong.”

Biden then introduced Lady Gaga as “my friend and a courageous lady herself.”

Gaga, dressed in white and playing a white grand piano, performed her Oscar-nominated song “Til It Happens to You,” from the documentary “The Hunting Ground,” which investigated widespread sexual assault on American college campuses.

In a red carpet interview televised on ABC prior to the show, Gaga identified herself as “a survivor” and expressed her appreciation for the opportunity to perform the song and spread awareness. “I’m very grateful to the Academy for giving us this world stage to reward survivors for being brave and coming forward,” she said.

Dozens of victims of sexual abuse appeared on stage holding hands behind Gaga and received a standing ovation.

“Til It Happens to You” lost out to the latest James Bond theme song “Writing’s On The Wall” performed by Britain’s Sam Smith, who acknowledged Gaga in his acceptance speech, calling her “incredible.”

Gaga returned to the Oscars stage a year after she led the Academy’s tribute to the “Sound of Music,” singing a medley of classic songs from the musical film.

Gaga’s Oscar performance comes on the heels of a busy month for the singer, who earned praise for her rendition of the national anthem at the Super Bowl.

The six-time Grammy winner, known for pop songs such as “Bad Romance” and “Born This Way,” also performed a psychedelic tribute to the late singer David Bowie at the Grammy Awards, channelling his signature androgynous look. 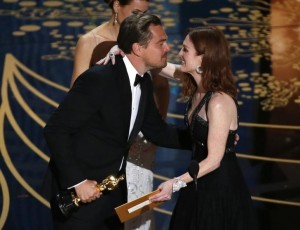 Leonardo DiCaprio receives the Oscar for Best Actor for the movie “The Revenant” from Julianne Moore at the 88th Academy Awards in Hollywood, California February 28, 2016. REUTERS/Mario Anzuoni

DiCaprio, 41, had been nominated four times previously for an acting Oscar over a career spanning 25 years. He was the favourite to clinch the Academy Award this year for his gruelling portrayal of a fur trapper left for dead in an icy wilderness after being mauled by a bear.

In a fight for survival, his “Revenant” character Hugh Glass treks through snow-covered forests, gets swept away in a waterfall, sleeps inside the carcass of a disemboweled horse and hungrily eats raw bison liver before making it back to his camp.

DiCaprio, a bachelor with a string of supermodel girlfriends, has matured into one of the world’s most admired and popular actors, as well as a champion of environmental causes ranging from marine reserves to the rights of indigenous people.

In his acceptance speech, DiCaprio, who received a standing ovation, said: “Let us not take this planet for granted. I do not take tonight for granted.”

DiCaprio added: “Our production needed to move to the southern tip of this planet to find snow. Climate change is real, it is happening now. It is the most urgent threat facing our entire species and we need to work collectively together, and we need to support leaders around the world who do not speak for the big polluters and the big corporations but who speak for all of humanity.”

DiCaprio had already won Golden Globe and Screen Actors Guild trophies for the role, which transformed the heartthrob from movies like “Titanic” and “Romeo + Juliet” into a greasy-haired 1820s fur trapper who barely speaks after the bear ripped his throat.

DiCaprio won his first Oscar nomination in 1994 for his supporting role as a mentally challenged boy in “What’s Eating Gilbert Grape.”

His romantic “Romeo + Juliet” and “Titanic” roles went unrecognized by the Academy of Motion Picture Arts and Sciences, and it was another 10 years before his obsessive-compulsive Howard Hughes in “The Aviator” brought a second Oscar nomination.

Nominations for 2006’s “Blood Diamond” and 2013’s “The Wolf of Wall Street” came and went without DiCaprio taking home the most coveted trophy in show business.