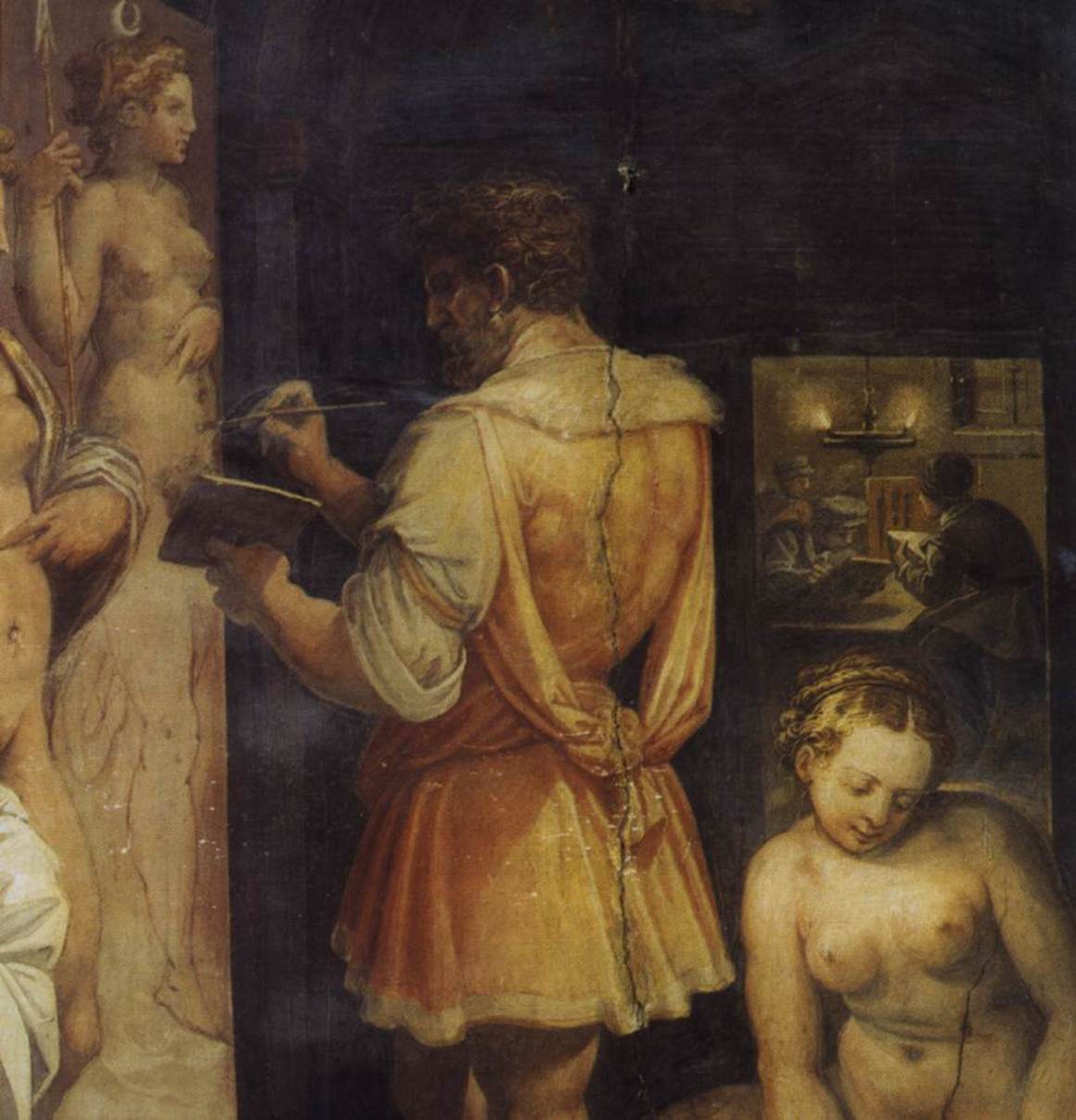 Tricksters appear throughout art history, from the trompe l’oeil (literally meaning to “fool the eye”) of the 5th-century artist Zeuxis to modern photography. Above a detail from Giorgio Vasari’s 1563 fresco, The Studio of the Painter – which depicts Zeuxis at work on his trompe l’oeuil images. Wikimedia Commons

By Phillip George, The Conversation
June, 2015

The very act of picking up a camera and raising it to your eye to frame what lays before you is a form of photographic illusionism. What was it that made you reach for the camera in the first place? And what compelled you to frame one part of the scene and not another? Why do so many people take particular photos – say of unusual weather – and post them online?

Games around what is real have been a dominant theme throughout the history of art, from the trompe l’oeil (literally meaning to “fool the eye”) of the 5th-century artist Zeuxis to the tricksters who faked images of a waterfall descending off Australia’s Sydney Harbour Bridge.

When an image is presented to the public, we must always be on the lookout for tricksters like these.

In 1917 Sir Arthur Conan Doyle, the creator of the great analytical mind of Sherlock Homes no less was fooled by two young girls, Elsie Wright and Frances Griffiths, when the girls produced a constructed photograph of the infamous Cottingley Fairies.

Conan Doyle was a spiritualist who was pre-disposed to accepting the photograph presented by the girls as evidence of the fairies he wanted to believe in. The idea of spiritualism flourished in the early 20th century, as did the leading edge photographic technique of the day – the double exposure. 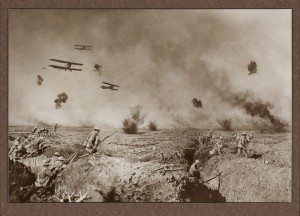 Hurley once claimed that “to get war pictures of striking interest and sensation is like attempting the impossible”. He thought that photographs should express ideas, tell stories and excite emotions – in much the same way as paintings do.

To achieve this, he began to manipulate war pictures to give in his mind a greater understanding of the complex panorama of the battlefield. Hurley grouped negatives together in the darkroom and made photographic composites, to better represent the battlefield.

Over time, the Hurley images have become sanctified via our historic institutions. And in this past week of ANZAC remembrance, you might have spotted documentary footage of the Gallipoli landing shot by Alfred Rolfe at Tamarama Beach in Sydney in 1915.

The footage is now so old it has also been incorporated into the “real” footage of the event.

An unambiguous use of photomontage was deployed against the Nazis by John Heartfield, a collage artist who was born Helmut Herzfeld in Germany and anglicised his name in an anti-nationalist protest.

Through his cut, copy and past technique, Heartfield reconfigured and re-deployed Nazis propaganda images into anti-Nazi propaganda. The Nazis despised him and his work so much he was placed onto a death list.

Speaking of propaganda, in a now infamous speech to the United Nations on February 5 2003, then Secretary of State Colin Powell produced faked documents about Iraqi nuclear weapons development in an attempt to take the USA and its client states to war.

Colin Powell’s fabricated evidence only ever really worked if, like Sir Arthur Conan Doyle’s and the fairies at the bottom of the garden, his audience was pre-disposed to accepting the “evidence” to reinforce their cultural, political, religious or ideological positions.

Like any skilled illusionist the Pentagon also needed to construct a fitting end to the invasion of Iraq when they decided to leave in 2003. They needed the right image.

The one produced was constructed in Baghdad’s Firdos Square. We see a statue of Saddam Hussein being pulled down by what the USA would have us believe are outraged locals. Pan the camera frame back and what is revealed is a near empty Firdos Square controlled by US military at each end. It’s now widely argued that the photo was staged.

The technologies by which we bring about photographic illusions might have improved – but the will of the tricksters is still alive and well.

Check our CONTENTS page for new works each week. Subscribe by email to our free FRONTLINES, a blog announcing new works, and the odd small tale. Look for evidence-based reporting in Reports; commentary, analysis and creative non-fiction in OPINION-FEATURES; and image galleries in PHOTO-ESSAYS. Some of our original works are behind a paywall, available with a $1 site day pass, or with a subscription from $2.95/month – $19.95/year. If you value journalism, please help sustain us.