crow in a yard

gets it done in

look I got up

all the hooks in it

A poem by Stephen Collis, from the Chapbook  New Life, available this month by Above/Ground Press.

Poet and professor Stephen Collis,  and biology professor Lynne Quarmby, were awarded the Nora and Ted Sterling Prize in Support of Controversy at Simon Fraser University in Vancouver, Canada, on Oct. 13. Here is Stephen Collis’s acceptance speech: “Here’s perhaps a bit of controversy: we’re not living in a democracy. Not, at least, if we take seriously the idea that a democracy is a system of rights and freedoms enshrining the self-determination of a community’s constituents. As many thinkers are now pointing out, western democracies in fact function much more like oligarchies …” 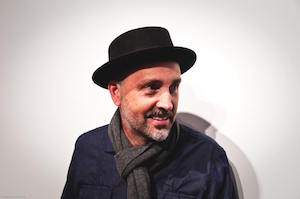 Stephen Collis is a Professor of English at Simon Fraser University in Vancouver, Canada. His many books of poetry include The Commons (Talon Books 2008; second edition 2014), On the Material (Talon Books 2010; awarded the BC Book Prize for Poetry), and To the Barricades (Talon Books 2013).  He has also written two books of criticism and a novel, The Red Album (BookThug 2013).  His collection of essays on the Occupy movement, Dispatches from the Occupation (Talon Books 2012), is a philosophical meditation on activist tactics, social movements, and change.  In September 2013 Coach House Books published DECOMP, a collaborative photo-essay and long poem written with former SFU student Jordan Scott. Visit his site at SFU here.