Why children’s books are serious literature 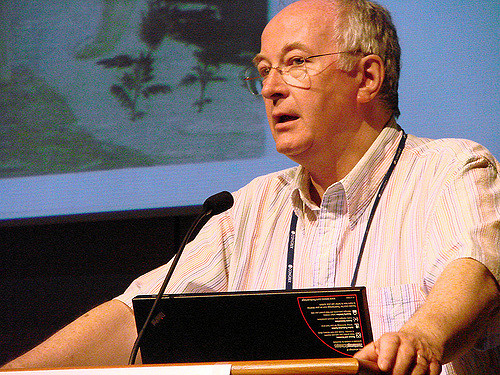 “There are some themes, some subjects, too large for adult fiction; they can only be dealt with adequately in a children’s book,” said Philip Pullman in a 1996 speech. Above, Pullman speaking at a literary event in 2008. Photo by Anna_t via Flickr, Creative Commons

Both as an author and an academic I take children’s literature seriously – it’s my professional raison d’être. This doesn’t mean that I think it should be discussed in hushed tones, however, only that it shouldn’t be dismissed as trivial. Children’s authors are excellent writers – moreover, our earliest encounters with the written word colour all that follows, so anyone who takes books for adults seriously should take children’s literature seriously too.

I’m not the first to make this case. Once a generation, it seems, a cri de coeur goes out, in which a representative of the world of children’s literature speaks with revelatory authority to the literary establishment and makes it reassess the place of children’s books.

In 1968, the Times Literary Supplement invited Alan Garner, the author of The Owl Service to write about his approach. Garner argued that children are the most rewarding and demanding readers, pointedly saying of his next book: “If it is good enough, it will probably be for children”.

Likewise, in 1996, Philip Pullman began his Carnegie Medal acceptance speech by declaring: “There are some themes, some subjects, too large for adult fiction; they can only be dealt with adequately in a children’s book.” Like Garner, Pullman had written books rich with literary reference and intellectual scope. Both men were self-confident, Oxford-educated and could not easily be patronised. Both men were in a field of literature numerically dominated by women. People listened.

For a time, because of Pullman’s own novels and later those of J.K. Rowling, children’s books were everywhere. Some suggested that the distinction between children’s and adult literature was disappearing: titles appeared in child and adult editions – identical but for the jacket (and price). For the majority of mid-list children’s authors, however, things soon reverted to the status quo ante. Review space in national newspapers, briefly abundant, dried up, and advances reverted to pre-Potter levels.

When the former Children’s Laureate Julia Donaldson called for children’s books to be taken seriously in 2013, her plea formed part of a recognisable cycle in the world of children’s literature. First comes neglect, tinged with contempt, then a shock in the form of some literary event or articulate advocacy, then a slow backsliding.

Why does the literary world go through these spasms? Let’s look at a few unrelated snapshots, and see if we can build an identikit face:

Such instances aren’t just a matter of snobbery towards “genre fiction”. A man seen reading a thriller may be sneered at, but if he is seen reading “chicklit” his virility may be questioned too. Similarly, adults who read children’s literature are tainted with childishness. Does that decision to publish some books with adults’ and children’s jackets really show barriers being broken down? That some were prepared to pay an extra pound or two to avoid being seen reading a children’s book suggests otherwise.

Ultimately, disdain for children’s literature has less to do with the quality of the work than with the contradictory feelings adults have about children and childhood. These fall into two broad groups, the first of which can be summarised: “The more grown-up the better.” As St Paul put it: “When I became a man, I put away childish things. For now we see through a glass, darkly: but then face to face” (I Cor 13.11).

The adult view is the real view; the child’s just an approximation. Applied to children’s literature, this leads to the belief that children’s books are literature with training wheels – and that those most nearly resembling adult books are the most worthwhile.

But this attitude coexists with its opposite too: think of Wordsworth’s vision of children trailing clouds of glory and dwindling into adulthood. Against St Paul we can recruit Jesus of Nazareth: “Suffer the little children to come unto me, and forbid them not: for of such is the kingdom of heaven” (Mark 10.14).

The idealisation of childhood is often held to have reached its zenith in children’s books of the early 20th century. But this view is actually tenacious – it lives on in the duty adults feel to shield children from adult knowledge, especially when it lurks between the covers of a book. Publishers and reviewers regularly let authors know that certain words and topics are out of bounds. Children must keep their innocence.

Despite opposition to these traditions, both continue to flourish – for both speak powerfully to adult fantasies. Children, and adults associated with children, are constantly buffeted in their cross-currents. If writers create a safe space sequestered from the wider world they are patronised for thumb sucking. But if they try not to be cosy, then they are corrupting the innocent youth who should be protected.

The battle to get children’s literature taken seriously will never be concluded, because so many adults are invested in not doing so. It would rob them of the comforting shibboleths they clutch like favourite toys: I am serious, you are trivial; I am adult, you are a child. I don’t say we should accept such opinions, but we should recognise that they will not go away. Taking children’s literature seriously is part of taking children seriously, and that is a lifetime’s work.

Catherine Butler is a Senior lecturer at Cardiff University  This article was originally published on The Conversation. Read the original article.