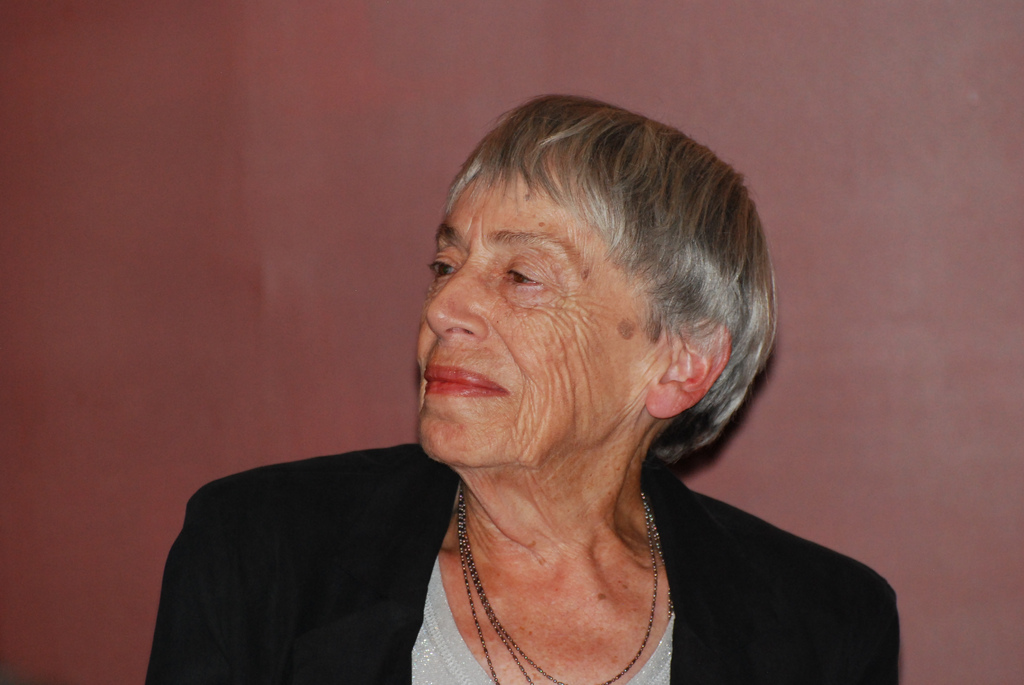 American author Ursula K. Le Guin on Wednesday slammed the U.S. publishing industry’s “ignorance and greed,” and issued a cri de coeur on behalf of artists in a world where “hard times are coming” and writers will be needed who offer hope and freedom, and “see through our fear-stricken society and its obsessive technologies to other ways of being.”

Le Guin won this year’s prestigious Medal for Distinguished Contribution to American Letters, given by the U.S. National Book Foundation to recognize “individuals who have made an exceptional impact on this country’s literary heritage.”

The award was announced in September, but presented at a gala on Wednesday, and Le Guin’s frank acceptance speech is garnering global attention for its demand for action. “The profit motive often is in conflict with the aims of art,” she said. “We live in capitalism. Its power seems inescapable. So did the divine right of kings.” 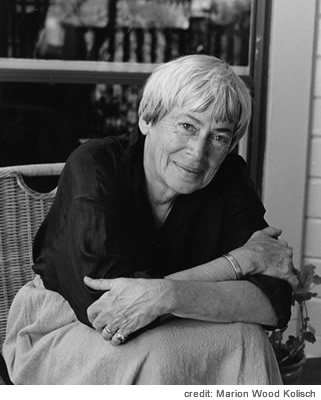 An excerpt, from a transcript from an activist with the Electronic Frontier Foundation:

Thank you Neil (Gaiman, who presented the award), and to the givers of this beautiful reward, my thanks from the heart. My family, my agent, editors, know that my being here is their doing as well as mine, and that the beautiful reward is theirs as much as mine. And I rejoice at accepting it for, and sharing it with, all the writers who were excluded from literature for so long, my fellow authors of fantasy and science fiction — writers of the imagination, who for the last 50 years watched the beautiful rewards go to the so-called realists.

I think hard times are coming when we will be wanting the voices of writers who can see alternatives to how we live now and can see through our fear-stricken society and its obsessive technologies to other ways of being, and even imagine some real grounds for hope. We will need writers who can remember freedom. Poets, visionaries — the realists of a larger reality.

Right now, I think we need writers who know the difference between the production of a market commodity and the practice of an art. Developing written material to suit sales strategies in order to maximize corporate profit and advertising revenue is not quite the same thing as responsible book publishing or authorship. (Thank you, brave applauders.)

Yet I see sales departments given control over editorial; I see my own publishers in a silly panic of ignorance and greed, charging public libraries for an ebook six or seven times more than they charge customers. We just saw a profiteer try to punish a publisher for disobedience and writers threatened by corporate fatwa, and I see a lot of us, the producers who write the books, and make the books, accepting this. Letting commodity profiteers sell us like deodorant, and tell us what to publish and what to write. (Well, I love you too, darling.)

Books, you know, they’re not just commodities. The profit motive often is in conflict with the aims of art. We live in capitalism. Its power seems inescapable. So did the divine right of kings. Any human power can be resisted and changed by human beings. Resistance and change often begin in art, and very often in our art — the art of words.

I have had a long career and a good one. In good company. Now here, at the end of it, I really don’t want to watch American literature get sold down the river. We who live by writing and publishing want — and should demand — our fair share of the proceeds. But the name of our beautiful reward is not profit. It’s name is freedom.

The award is not typically given to science fiction and fantasy writers. But the foundation said Le Guin deserved it because, for four decades, she “defied conventions of narrative, language, character, and genre, as well as transcended the boundaries between fantasy and realism, to forge new paths for literary fiction.”

“Le Guin’s fully imagined worlds challenge readers to consider profound philosophical and existential questions about gender, race, the environment, and society. Her boldly experimental and critically acclaimed novels, short stories, and children’s books, written in elegant prose, are popular with millions of readers around the world.”

The announcement quoted Foundation’s Executive Director Harold Augenbraum: “She has shown how great writing will obliterate the antiquated — and never really valid — line between popular and literary art. Her influence will be felt for decades to come.”

You’ll find lots of great free stories inside our site, but much of our original work is behind a paywall — we do not sell advertising, and reader payments are essential for us to continue our work. Journalism to has value, and we need and appreciate your support (a day pass is $1 and a monthly subscription is less than a cup of coffee).