Once shunned by academics, Wikipedia now a teaching tool

Wikipedia, the upstart Internet encyclopedia that most universities forbid students to use, has suddenly become a teaching tool for professors. University teachers have swapped student term papers for assignments to write entries for the free online encyclopedia.

Wikipedia is an “open-source” Web site, which means that entries can be started or edited by anyone in the world with an Internet connection. 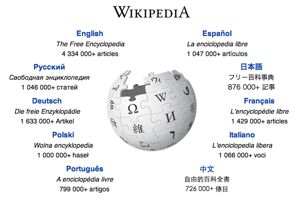 Academics are using Wikipedia as a teaching tool. (Screen shot of http://www.wikipedia.org)

Writing for Wikipedia “seems like a much larger stage, more of a challenge,” than a term paper, said professor Jon Beasley-Murray, who teaches Latin American literature at the University of British Columbia in this western Canadian city.

“The vast majority of Wikipedia entries aren’t very good,” said Beasley-Murray, but said the site aims to be academically sound. To reach its goal of academic standards, said Wikipedia’s Web site, it set up an assessment scale on its English-language site. The best encyclopedia entries are ranked as “Featured Articles,” and run each day on the home page at www.wikipedia.com.

To be ranked as a “Featured Article,” Wikipedia said an entry must “provide thorough, well-written coverage of their topic, supported by many references to peer-reviewed publications.” Of more than 10 million articles in 253 languages, only about 2,000 achieve “Featured Article” status.

As an experiment, Beasley-Murray promised his students a rare A+ grade if they got their projects for his literature course, called “Murder, Madness and Mayhem,” accepted as a Wikipedia Featured Article. Three entries created by nine students in the course became the first student works to reach Wikipedia’s top rank.

Their articles, about the book “El Seqor Presidente” by Nobel prize-winning Guatemalan author Miguel Angel Asturias, ran on May 5, 2008, on Wikipedia’s home page. Wikipedia also designated a student’s biography on Peruvian novelist Mario Vargas Llosa, and an entry on Gabriel Garcma Marquez’s book, “The General in his Labyrinth.” Beasley-Murray said the projects took the students four months, and one entry was revised 1,000 times.

Typically, thousands or millions of people visit a Wikipedia entry, and each visitor is able to edit entries, or even flag an article considered unworthy to have it removed.

Working online with anyone watching or editing “was really hard to get into,” said Eva Shiu, a third-year student who worked on the Marquez entry. “But it was really exciting, and I feel like I’ve accomplished something,” she said in an interview.

“I got addicted to it … I was up nights until three or four in the morning working on it.”

Monica Freudenreich, who worked on the Asturias entry, said she liked the fact her contribution will survive online. Usually term papers “end up in a binder than eventually sits under my bed,” she wrote on Wikipedia.

Wikipedia itself invites professors “to use Wikipedia in your class to demonstrate how an open content Web site works (or doesn’t).” But the experiment has had controversies, including student work that was instantly deleted as not “notable.”

“Sometimes it’s a disaster,” said Beasley-Murray. “But in some ways it’s good news … this was a great learning experience for students.”

Originally published by Agence France-Presse, May 12, 2008