How I watched Lee Child write a Jack Reacher novel 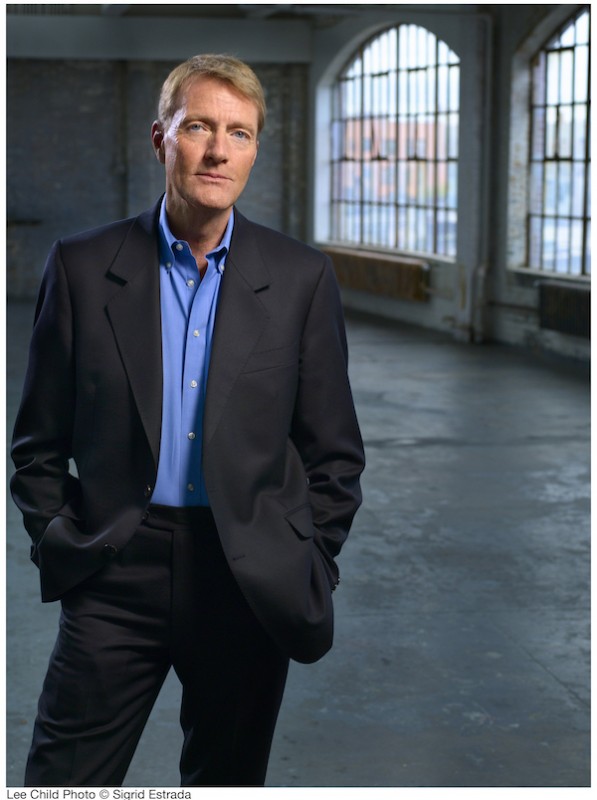 Nobody really believes him when he says it. And in the end I guess it is unprovable. But I can put my hand on heart and say, having been there, and watched him at work, that Lee Child is fundamentally clueless when he starts writing. He really is. He has no idea what he is doing or where he is going. And the odd thing is he likes it that way. The question is: Why? I mean, most of us like to have some kind of idea where we are heading, roughly, a hypothesis at least to guide us, even if we are not sticking maps on the wall and suchlike. Whereas he, in contrast, embraces the feeling of just falling off a cliff into the void and relying on some kind of miraculous soft landing.

Of course he is not totally tabula rasa. Because he, and I, had a fair idea that the name Jack Reacher was going to come up somewhere in this, his 20th novel in the series.

It’s probably a defensive reflex gesture, but I sometimes like to joke that, when I had this crazy idea of writing a book about a novelist working on a story from beginning to end, that I first contacted Amis/Tartt/Franzen/Houellebecq and when they were unavailable I only asked Lee Child as a desperate last resort. The reality is he was the first writer I thought of. He has always struck me as a blessed (and I don’t mean by that successful) and exemplary incarnation of what Borges called “the spirit of literature”. He is, more than anyone I can think of, a pure writer, with a degree zero style. Maybe sub-zero. He doesn’t plan. He doesn’t premeditate. He loves to be spontaneous. Which explains two things: One: that he said yes to my proposal. “I’m starting Monday”, he wrote, “so if you want to do this you’d better get over here.” And, two: that he also said: “I have no plot and no title. Nothing.”

When I got there, on September 1 of last year, to his apartment on the Upper West Side of Manhattan, overlooking Central Park, just up the street from where John Lennon once lived (and where he was shot dead by a deranged fan), all he had was sublime confidence. And a title, which he had come up with the night before: Make Me. He just liked the sound of it.

It had to be September 1. It’s a ritual with him: 20 years to the day since he went out and bought the paper and a pencil with which to write his first novel, Killing Floor. (It had to be a pencil: he decided he couldn’t really afford anything better, having just been sacked from his job in television). When he sat down to write the first sentence, all he had in his head was a scene, a glimpse of a scene: a bunch of guys are burying someone, a big guy, using a backhoe (or JCB). He had no idea who they are, why they are doing this, or who the big guy is either, other than that his name is Keever.

So he wrote the following sentence: “Moving a guy as big as Keever wasn’t easy.” I was looking over his shoulder, but I was about a couple of yards or so behind him, perched on a couch, so I had to peer hard at the screen. All I could make out was the “-ing”. It was enough for me. Good start I thought: participle, verb, action. I had to know more. But he didn’t know more, at this point. We discussed the first couple of pages, when they popped up out of his printer. He knew it had to be third-person. No dialogue, but he tried to capture something of the vernacular in a Flaubertian style indirect libre. And Reacher, when he gets off the train in the small town of Mother’s Rest, in the midst of “nothingness”, has no absolutely no idea what is going on.

Which was exactly how Lee Child felt. For the next few months I looked on with a degree of anxiety. Maybe he would never finish this one. The whole project looked doomed. Reacher was wandering around this small town, trying to work out mainly why it was even called Mother’s Rest. He didn’t even know that Keever was a dead man at this point. He was a fairly useless detective, because he couldn’t even figure out what the crime was, let alone solve it.

So too Lee Child. He wandered around New York, then drifted off to the West Coast, then Madrid, then Sussex, and still had no idea what the hell was going on in his book. If it was a book. Around Christmas time I spoke to him on the phone and he said: “Maybe it’ll make a good short story.” And added: “Maybe I should go back and work in television. I hear it’s improved a lot since my day.” And tossed in stray remarks like: “I guess I’m all out of gas.” He was partly winding me up of course – if he didn’t finish then neither would I. But after Phase One in his writing (what he calls “the gorgeous feeling” of the beginning) there is a Phase Two, which puts him in mind of Sisyphus and his travails. He struggles and meanders. Smokes more and drinks more black coffee, if it is possible to drink more black coffee. Puffs on the occasional joint in hope of inspiration finally striking.

Some time in January, it started to crystallise in his mind and he gave me the Big Reveal. Looking back at my notes, I see that I said to him, in a tone of mixed awe and horror: “You evil mastermind bastard.” I realised that there was a simple mistake I had been making all along. I had been mixing him up with his hero Jack Reacher. Whereas I now realised what I should have realised long before that he was also every single bad guy he had ever dreamed up. All those fiendish plots were actually his. The role of Reacher was to stop him plotting and for all I know taking over the world. Reacher keeps the author in check.

Then, in his phrase, it was the “marathon sprint” to the end. He got to the final page on April 10, 2015, surviving on a diet of Sugar Smacks and Alpen and toast, garnished with mucho caffeine and nicotine.

Having feared he would never get to the end, I was not sure I really wanted him to finish. Or whether I should be there to watch. It really seemed as if I was transgressing and crossing the line into some sacred place. I was bearing witness to the creative process dying. But without which the book itself could never be born. Last word: “needle”. “Moving … needle”. The whole book was there.

He stopped, so I stopped. That was the rule. I started when he started, so I had to finish when he did, or the day after anyway. No additions, no time for further reflection. It all had to be done according to the same principle he had adopted. Even before he had written the first sentence, he turned to me and said: “This is not the first draft, you know”. “Oh – what is it then?” I asked naively. “It’s the ONLY DRAFT!” he replied, with definite upper case or at least italics in his voice. He didn’t want to change anything, so neither could I.

Hence it took me several months to work out why it was that he worked in this fundamentally terrifying, angst-inducing way. Actually several explanations have occurred to me: sloth for one. He just can’t be bothered. And then there is what he says, which is that he would be “bored” if he knew what was coming next. But contained in that statement is a hint of what I think is the case and in fact is the secret of his whole writing.

Lee Child writes his books as if he were the reader not the writer. When he is sitting at his desk in that back room in Manhattan he is only typing. The real work takes place when he is “dreaming”, when he is being just another reader, wondering what is coming next, waiting to find out. It probably explains too why he allowed me to look over his shoulder and watch his sentences taking shape even before he knew how they would end. He feels a natural sympathy with readers because he is one.

I sometimes like to claim – with absurd grandiloquence – that my book is some kind of first in the history of mankind, sitting around watching another guy write a whole book: but in fact that would be a lie, because I had to run off from time to time so as not to curl up and die of involuntary inhalation. But the “first” that I really would like to lay claim to is this: I am the first reader of a Lee Child novel to read it slowly. I had to keep stopping because he kept stopping. Because he really had no idea what was coming next. “Why did you stop there?” I asked him one day, feeling he hadn’t really written enough for that day. “I had to stop there,” he said. “I have no idea who that guy in the Cadillac is.”

Andy Martin is a Lecturer, Department of French, University of Cambridge.  This article was originally published on The Conversation. Read the original article.  Visit Lee Child’s web site, here.

Facts and Opinions is a boutique journal of reporting and analysis in words and images, without borders. Independent, non-partisan and employee-owned, F&O is funded only by you, our readers. We are ad-free and spam-free, and do not solicit donations from partisan organizations. To survive we need a minimum payment of .27 for one story, or a sustaining donation. Visit our Subscribe page for details, or donate below. With enough supporters each paying a small amount, we will continue, and increase our original works like this.