George Packer: The Unwinding, an Inner History of the New America

The Unwinding: An Inner History of the New America
By George Packer
Farrar, Straus and Giroux, 448 pp. 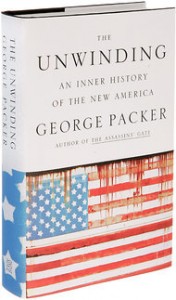 On a fall night, I wandered through the dark, foggy campus of the University if British Columbia, replete with cautionary signs to men about treating women right, to hear George Packer, superb chronicler and feature writer for The New Yorker magazine.

Packer was on the Canadian campus as part of the Vancouver Writers Festival to talk about his latest book, The Unwinding, a best-selling attempt to get at the root of what the heck has gone wrong in once-mighty America through a series of individual profiles. Five are exhaustive looks at four “ordinary” people we’ve never heard of, plus PayPal mega-zillionaire Peter Thiel. Those are interspersed with 10 shorter vignettes of the more prominent, from Oprah to Newt “Eft” Gingrich to Walmart founder Sam Walton.

An engaging, pleasant-looking fellow with thinning hair, Packer oozed sympathy and respect for his struggling countrymen, while barely disguising his loathing for the excesses of those at the top.

He drew gasps from the nearly sold-out crowd at the university’s Frederic Wood Theatre, when he pointed out that Sam Walton’s six heirs will eventually have as much wealth as the bottom 42 per cent of Americans. Meanwhile, incomes for the country’s top one per cent have soared by 256 per cent over the past 30 years, while those of the middle class have nudged higher by a mere 21 per cent. “These aren’t just numbers,” said Packer. “This is a very bad sign. It’s bad for democracy.”

In The Unwinding, which New York Times reviewer Dwight Garner hailed as “something close to a non-fiction masterpiece,” Packer wrote: “Over the years, America had become more like Walmart. It had gotten cheap. Prices were lower, and wages were lower. There were fewer union factory jobs, and more part-time jobs as store greeters….The hollowing out of the heartland was good for the company’s bottom line.” He told us: “It’s starting to feel like the end of an empire.”

Packer pinpoints 1978 as the start of the great United States of America decline. That’s when infamous Proposition 13 passed in California, keeping taxes so low that almost anything good could no longer be adequately funded. The state has since gone from having the country’s best public education system to one of the worst.

“That’s when something about egalitarian, middle-class society began to turn,” said Packer. “De-industrialization started to accelerate. There was the information explosion. Lobbying began to take over Washington in a big way, drowning out the voice of the citizen. It was also the beginning of the right wing coming to power. Newt Gingrich had a whole new attitude towards politics: destroy the institutions from within, tear them down and then build up his own power base.”

Oprah? Packer won’t be jumping up and down on her couch anytime soon. “She’s offering inspiration and positive feelings at a time when people’s overall economic path is blocked. She encourages Americans to turn to magical thinking: if I think I can, I can do it. It’s [the wrong] message for a tough time.”

Taking questions, Packer said it’s hard to predict where his country is headed, but he’s apprehensive. Institutions once franchised to support the broad middle class – banks, corporations, newspapers, schools, and so on – have become undone, he said. “That [philosophy] has disappeared.”

He reserved his harshest criticism for the zealots who appear to have captured the Republicans, once America’s mainstream political party, slightly to the right of centre.

“I think the Republican Party has to be soundly beaten a few more times,” Packer declared. “Right now, they’re like a band of guerillas in the jungle, who think they’re going to win the war. They’re like the Tamil Tigers … The Republicans need to get badly beaten some more, in order to return to a normal political party that isn’t out to destroy our institutions. Right now, they’re still on the road to causing a lot of damage and destruction.”

Nor is Packer, who is not nearly so gloomy in person as his message, a fan of the great moguls of social media.

“I’m skeptical about Silicon Valley and their effect on our country. At least with the oil and gas companies, you know what they’re after,” he said. “To me, the smiling face on Facebook is scarier than Exxon Mobil.”

Packer subtitled his book “An Inner History of the New America.” Recommended.